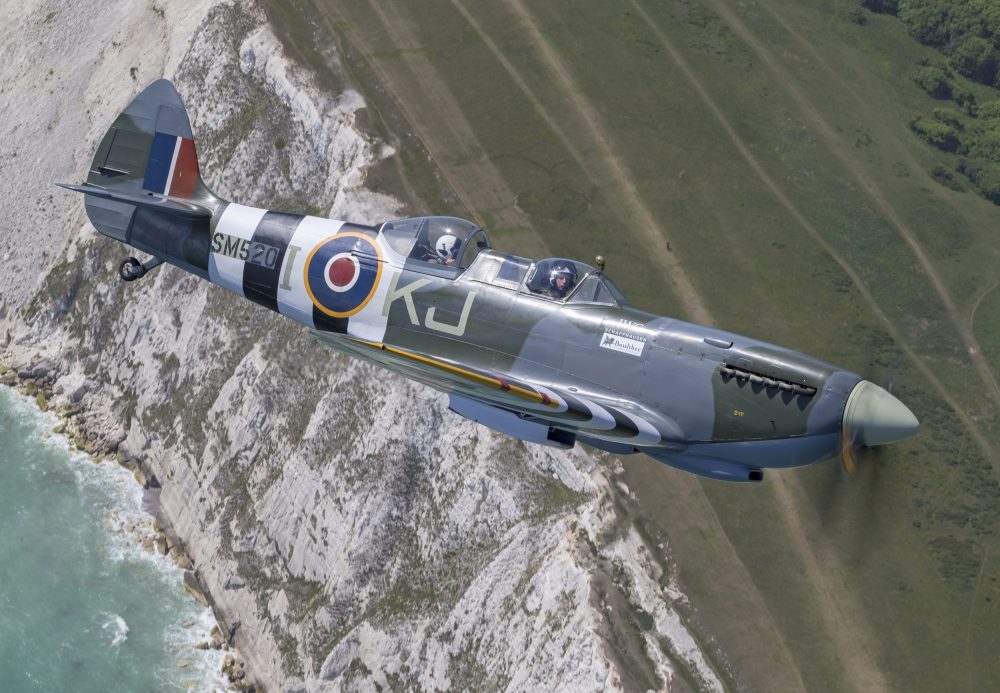 +VIDEO Boultbee Flight Academy commemorated D-Day75 by inviting veteran WWII Spitfire pilot Sqn Ldr Alan Frost – who flew combat missions over Omaha and Utah beaches on the morning of 6 June 1944 in his pyjamas –  to fly again in the back of a MK IX two-seat Spitfire.

Sqn Ldr Alan Frost’s flight took him out into the Solent, over the Needles, and along the white cliffs off the south coast.

The sector Sqn Ldr Frost was covering on D-Day – as he escorted airborne troops crammed into tugs and gliders to drop-zones behind enemy lines – were the bloodiest, most heavily contested beaches of 6 June: Omaha and Utah.

Sqn Ldr Frost was flying with 234 Sqn and was only 21 years old at the time. He was assigned one of the first flights of D-Day and was airborne early, meaning he spent D-Day flying in his pyjamas underneath his flying suit.

To make light of this remarkable detail, the flight crew at Boultbee Flight Academy presented Sqn Ldr Frost with a brand new pair of pyjamas.

Ten local pupils from Crofton Anne Dale School painted D-Day stripes on the aircraft, whilst Sqn Ldr Frost explained the importance of these identification marks and their purpose in reducing the risk of ‘friendly fire’ incidents.

Sqn Ldr Frost said, “This is one of the best days of my life. The most joyful of days. I’m a very lucky man with a wonderful family”.

“What a machine to fly. You simply lean where you want to go, and the plane follows.

“I woke up in a tent on the morning of D-Day at a forward operating base at Beachy Head. I took off very early in the morning to fly escorts and top cover over Omaha and Utah. I soon realised I must have been the only allied airman in the air that day wearing his pyjamas!

“Flying across the channel, there were so many ships. Thousands of them. It looked like you could walk to France. It was a remarkable sight.

“We painted the invasion Stripes in such a rush. I remember flying over the beaches and most of the white paint on my aircraft had washed off in the weather. It was black stripes, with a few tiny spots of white!

“I didn’t see a single German aircraft on D-Day. But we took fire from the ground, and a couple of chaps were shot down.”

Jim Schofield was flying PIC with Sqn Ldr Frost. He said, “It got dusty in the cockpit at one point. I definitely shed a few tears. It was an incredible honour for me to fly Sqn Ldr Alan Frost today, 70 years after his last Spitfire flight”.