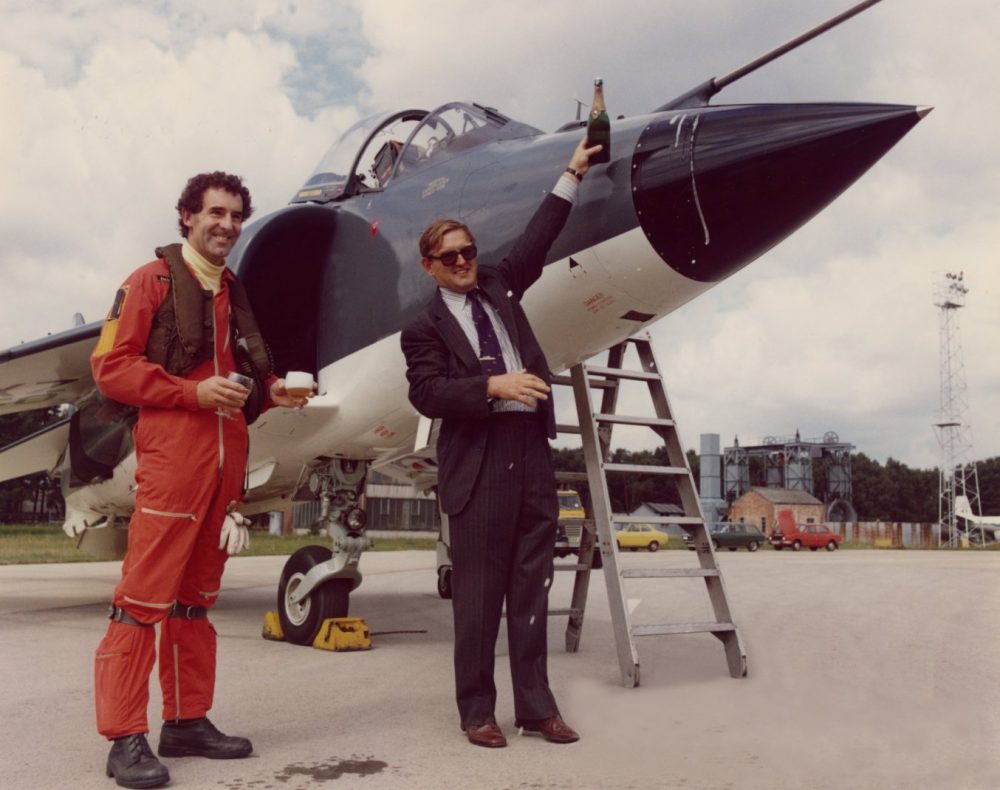 John Farley, the former test pilot and FLYER contributor, died earlier this week. John was most noted for the Harrier jump jet test programme and for his displays, including the ‘Farley Takeoff’.

Accortding to the history society of Dunsfold Airfield, where John did much of his test flying and later became airfield manager, he would hover the aircraft at around 100ft agl.

“Then, using the Reaction Controls, raise the nose to around 60 degrees, adjusting the main engine nozzles to suit, so the aircraft was still hovering, but with a high nose-up attitude. Then he would apply maximum power and ‘rocket climb’ away. There are no gauges or instruments to aid this, it was all by seat of the pant’ judgement. Service pilots were forbidden from even thinking about trying it!”

The Association of Aerospace Universities, where John was a past honorary president, has this biography:

John Farley OBE AFC CEng HonDTech HonDEng did his engineering training as a student apprentice at the Royal Aircraft Establishment Farnborough before joining the RAF for pilot training in 1955. After flying Hunters with 4 Squadron based in Germany, he was a flying instructor at the RAF College Cranwell before joining the Empire Test Pilots’ School course in 1963.

Following a distinguished pass from ETPS he became a test pilot on the RAE Aerodynamics Research Flight at Bedford. During this tour he flew all the UK research aircraft then flying. As RAE project pilot on the P1127 [the Harrier] prototype in 1964, he started what was to become 19 years of Harrier programme test flying moving from the RAE to join Hawker Siddeley Aviation at Dunsfold from where he retired as Chief Test Pilot in 1983.

John Farley flew over 80 different aircraft types, both fixed and rotary wing. In 1990 he became the first western test pilot invited by the Russians to fly the Mig-29 and later participated with Lockheed as a JSF Red Team member.

John retired from test piloting in 1999 but continued to consult on flight test programmes. In 1995 he started summer school courses for 16 to 18 year old students to encourage them to become engineers in the aerospace business and ran the Schools Aerospace Challenge and International Aerospace Summer School, both held at Cranfield University. He was elected President of the AAU in 2009.

You can read more about John Farley in his autobiography, available in print here or as a digital download here.