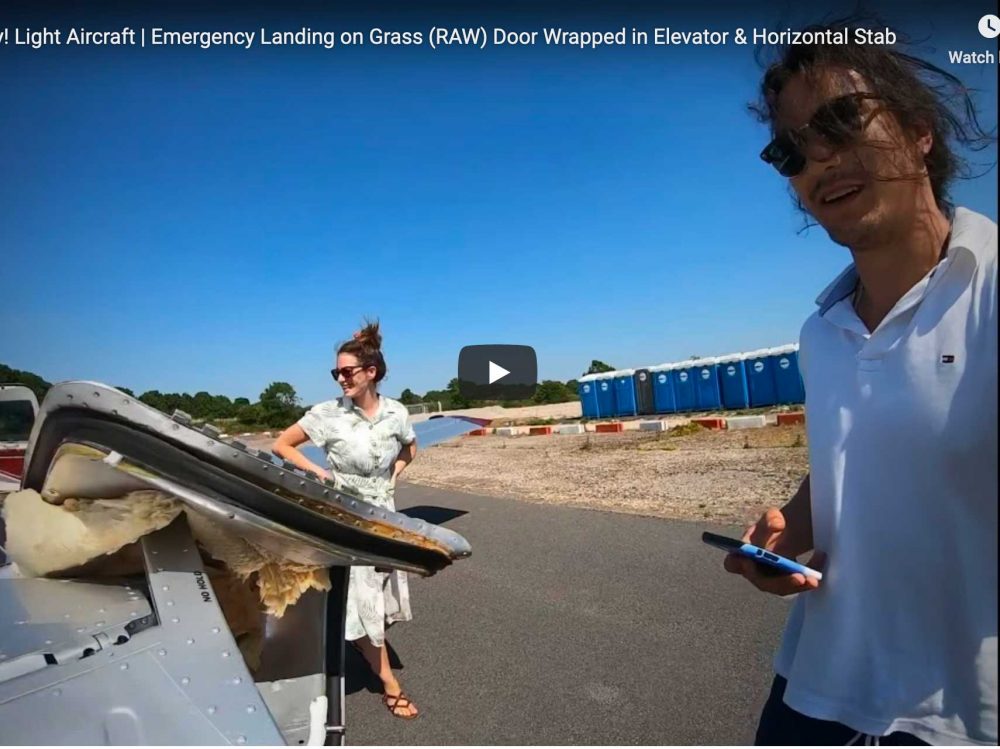 It’s a pilot’s nightmare: flight controls of the aircraft become jammed and a difficult forced landing is the only answer. In Steve Le Van’s case, the whole incident was captured on in-cockpit video (see below).

“Second flight of the day, my wife and I were returning from Charlton Park to our homebase at Fairoaks.

“Fifteen minutes into the flight the baggage hatch opens and breaks away from the piano hinge and it somehow catches on the leading edge of the horizontal stabiliser. The loose metal managed to wedge itself between the elevator fork and the main surface restricting free movement of flight controls.

“After the initial impact of the door hitting, you can see the aircraft pitched itself into a negative attitude. We were only at 2100ft on the QNH & started to roll slightly to the right.

“After a second I regained partial control, except for a 300ft/min level descent, then had an uncontrolled full deflection of the ailerons both right and left.

“With direct line of sight of the damage from the P1 seat and the old RAF strip at Membury visual, I did not hesitate to declare a Mayday with Brize Radar and proceeded to line up for R13.

“After trimming out everything we had left on the downwind leg, the yoke continued to buffet. Turning base felt ok but turning final the aircraft just didn’t want to behave and I had to fight to get back onto the centre line, over the motorway & all the way to the ground.

“With the debris on the wing, it felt like it was trying to stall the tail. Having heard other pilot stories, I was more concerned about falling out of the sky rather than running out of field, if we got there.

“POH states 96kt with the door open… I can’t imagine an improvised airbrake on the tail improves the performance. 100kt was my target over the threshold.

“Gear down, couple of bounces and roll out onto the asphalt.

“Mooneys have control rods rather than cables connecting the flight controls and an articulating tail trim so although in the video the aircraft seems responsive, it needed huge pressure to hold level.

“The warping on the elevator, popped rivets and twisted stabiliser and sheared metal on the empennage just shows how much force was being applied.”