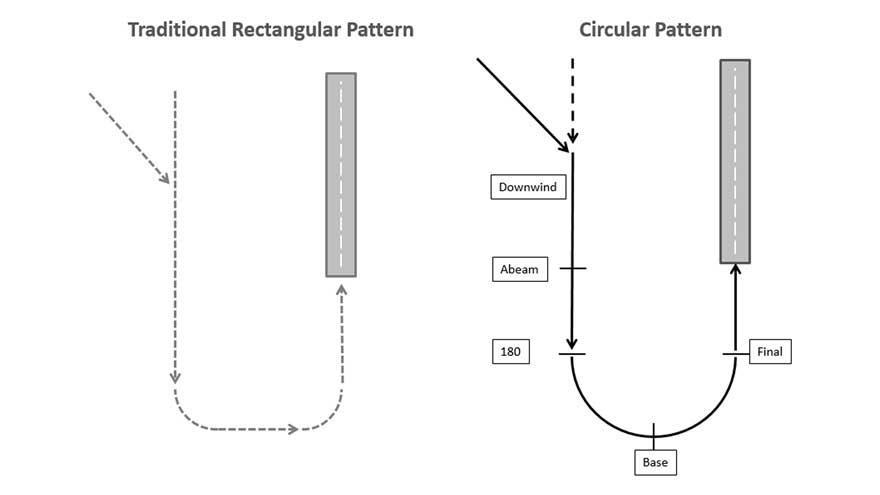 So why do General Aviation aircraft fly a rectangular shape circuit at an airfield and military aircraft usually an oval circuit with circular ‘ends’?

Whatever the reason, the AOPA Air Safety Institute and University of North Dakota, a well-known aviation college, has announced a study into the use of a continuous turning approach or ‘circular circuit’ (‘pattern’ in American English) as an alternative to the traditional box or rectangular traffic pattern.

The study has come about after the NTSB, which investigates air accidents in the US, again named ‘In-flight Loss of Control’ as a major cause of accidents to GA pilots. NTSB officials in a round-the-table discussion with industry came up with the idea that AOPA and UND get together to explore how simple procedural and training methodology changes in the landing circuit might improve safety and reduce loss-of-control accidents.

The suggestion is that a continuous turn from the downwind leg to final may offer increased stability, reduced pilot workload, and a constant bank angle, helping pilots better manage angle-of-attack changes.

It’s also thought that there’s less chance of overshooting a runway during that final base-to-final turn. Many stall/spin accidents have occurred during this low level turn, some because of a too steeply banked turn to get inline with the runway.

“It’s too early to say for sure if the continuous turn to final method will be a safer, more stabilised way to land,” said George Perry, senior vice president of AOPA’s Air Safety Institute.

“But what we do know is General Aviation has been flying the rectangular pattern [circuit] for decades, and based on substantial loss-of-control accident data in the landing pattern, we believe it’s time to conduct research to determine if there is a potentially safer alternative.

“The U.S. military, commercial airlines, and many airline ab initio programs already utilise the continuous approach turn as the standard to support safe landing pattern operations. We should determine which is safer for General Aviation, and this study will help us find the answer.”

The research will consist of flight data analysis to evaluate differences between the circular circuit and the rectangular circuit, according to UND which is carrying out the study.

“Variables that will be analysed include bank angle, airspeed, and runway overshoot,” said Lewis Archer of UND’s aviation dept.  “Although the study is in its early phases, and it’s far too soon to draw any definitive conclusions, the new procedure has already been studied and practiced by a select group of UND instructor pilots and initial data collection has been going quite well.”

AOPA in the US reports that the study results should be available in early 2017.