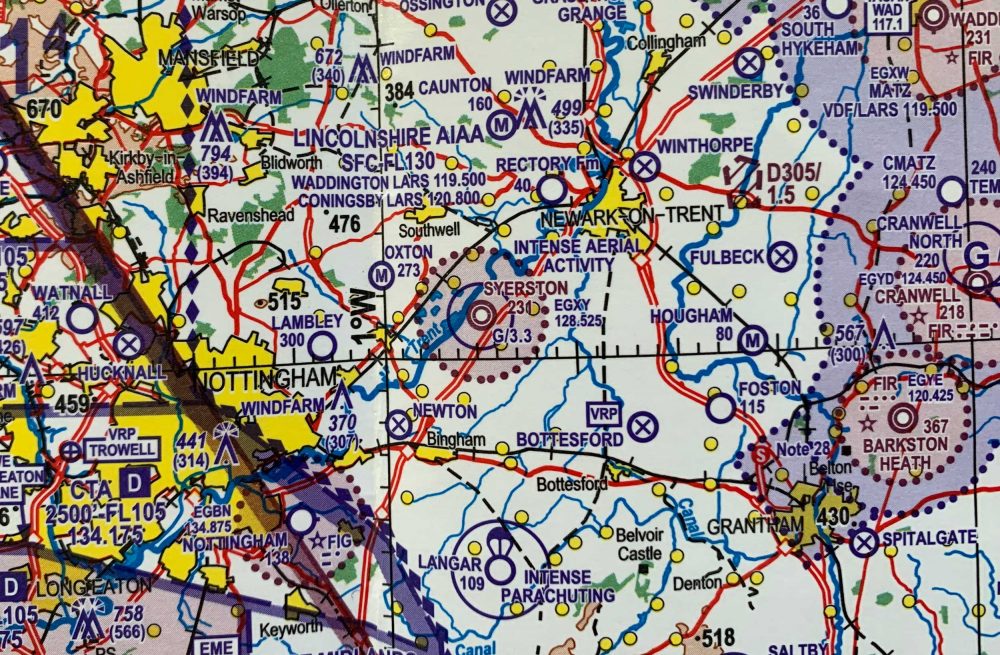 An unnamed pilot has been fined £3,200 following an airspace infringement over a glider launch site that resulted in a near-miss with a glider.

The incident took place last November over RAF Syerston, home to the RAF Central Gliding School which has an active Air Traffic Zone to protect the glider winch launches.

The Airspace & Safety Initiative has issued this report on the incident and court case which took place on 3 July 2019:

Background
In November 2018, a C152 pilot departed Gamston aerodrome to fly to Leicester aerodrome. His planned route would have taken him to the west of Syerston. The pilot’s intention was to fly on a track of 210º from Gamston and turn onto 180º degrees when just past Ollerton (5.5nm southwest of Gamston aerodrome) towards Leicester.

The flight took place in mid-afternoon and the low sun was affecting visibility to the west. The pilot was not equipped with any electronic navigational aid such as a moving map.

RAF Syerston is a government aerodrome with an ATZ of 2nm radius extending to 2000ft agl (2,231ft amsl) lying in Class G airspace. It is served by an Air/Ground (A/G) radio service on 128.525MHz.

The aerodrome is used for glider operations. Gliders are launched by winch and by aero-tow. Winch launch activity takes place up to 3300ft amsl and is charted as such with a G symbol on the 1:250,000 and 1:500,000 VFR charts along with the A/G frequency. As with all military ATZ, the details are notified in the UK AIP ENR 2.2.

The C152 pilot
Outbound from Gamston, as he climbed past 1500ft, it became apparent to the pilot that visibility was poor to the south and west. The pilot descended to remain visual with the ground. He believed he turned early and flew on a more south-easterly track than planned.

In receipt of a Basic Service from East Midlands Radar, the controller told the pilot that Syerston was active and repeated it to him shortly afterwards.

When the pilot encountered a glider in his 12 o’clock, he climbed and manoeuvred to maintain separation. He estimated that the two aircraft had passed within 300ft of each other but was satisfied that there was “no danger of collision”.

The pilot stated that flying conditions had been difficult. Visibility was poor with low sun. He had ended up five miles east of where he thought he was.

Analysis of radar data showed that the aircraft had flown over Southwell, directly through the Syerston ATZ and overhead the aerodrome to Bottesford. The route had taken the C152 overhead the glider site at 1578ft amsl.

The glider pilot
The glider pilot was conducting an exercise within the ATZ at about 1100ft and flying northwards. He saw an aircraft flying towards him, over the launch winch, no more than 100ft above and 500ft away laterally from his glider. The pilot assessed that the aircraft would come close to him if he did not do something and so he rolled the glider to the right to create distance.

The aircraft passed the glider about 100-200ft to the left and at a similar altitude. The winch operator reported to the pilot that there was an aircraft above him and consequently a glider launch was stopped whilst the unknown aircraft was within the ATZ.

Risk of cable strike
The pilot overflew a glider site, albeit unintentionally, that was annotated on the chart with winch launch activity up to 3300ft amsl. A 4.5mm Dyneema or steel wire in the air, when struck by an aircraft could have fatal consequences for both the aircraft impacting the wire and the glider, if still attached to the cable.

Pilots must plan to avoid glider, and other aerial sporting, sites and be aware of what lies along and in proximity of their intended route and near any planned alternates.

Check the VFR charts when route planning; a glider site is annotated on the chart as a G in a circle. If winch launching takes place at the location, a figure in thousands of feet will be annotated with the G. For example G/3.5 signifies winch launching to 3500ft amsl. Where the site is hang or para gliding with winch launching, the chart symbol will be shown with the altitude.

When using moving maps, although the gliding symbol is reasonably clear the difference in presentation from the CAA chart is significant. Pilots are to be aware that on some moving maps:

To see the required information on activity at the sporting aviation site the pilot must select the site by touching the symbol on the chart to open the dialog box.

In addition, pilots must check their APP settings to ensure that they have not de-selected sporting aviation. By doing so, the pilot becomes totally oblivious to any risk.

Met conditions
Both pilots stated that the low sun was affecting visibility. The C152 pilot added that flying conditions had been difficult.

Whilst the SERA VMC minima of 5km visibility may be reduced to 1500 metres if flying by day, and at 140kt or less, and below 3000ft for flights outside controlled airspace, pilots must apply Threat and Error Management when deciding if they are going to fly or continue with their flight. When flying at 90kt, an aircraft takes less than 33 seconds to fly 1500 metres.

Pilots, especially inexperienced pilots or those with low hours must recognise the threats associated with flying at the minima. Faced with the same met conditions, the C152 pilot stated that he would now return to the airfield (of departure).  It is important to know the legal limits as well as your own limits – do not ‘press on’.

Rule 11 of The Rules of the Air 2015
Aerodrome Traffic Zones (ATZ) are established under Rule 11 to are established to give protection to aircraft at the critical stages of flight when departing, arriving and flying in the vicinity of an aerodrome.