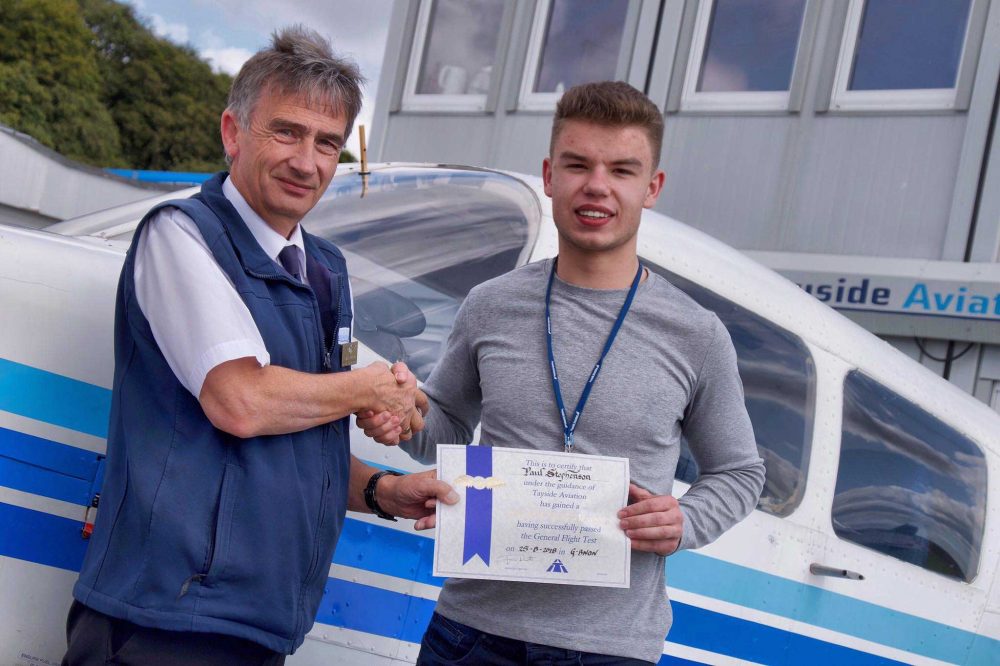 Paul Stephenson has wanted to be pilot since his first holiday abroad at 13. Now 21, Paul, from Eston, Middlesbrough, is one of over 70 students working towards the BSc (Hons) Professional Aviation Pilot Practice degree at Dundee-based Tayside Aviation.

However, Paul’s journey to Dundee was not straightforward. Having grown up in a single parent family in a council estate, Paul admits that he didn’t fit the stereotype of a typical pilot.

Paul had five jobs before the age of 21, from working in a supermarket and dog grooming to a telecoms engineering, having to earn his own money due to the family’s challenging financial situation.

Paul said, “Growing up, it was just my Mum and I, with my brother in and out of jail and my sister also living there on and off.  We didn’t have money but I had lots of love and support.

“My life could have gone down a very different path like some of my peers who got into drugs and other crime. I wasn’t the best behaved at school and not overly academic, but I was headstrong and knew I wanted a better life for myself.”

Paul’s fascination with aviation emerged when he began attending RAF Air Cadets at the age of 13, a suggestion by an older pupil at his school.

“From my first supervised flight at the age of just 14, I started to realise that I could become a pilot one day.

“As that career goal became a possibility, I started working harder at school and doing better in my exams. I even started winning awards and became a prefect – basically turning my life around.”

At the age of 17, Paul won a 12-hour scholarship with the RAF Air Cadets, a ‘huge milestone’ which led him to Tayside Aviation in Dundee.

He applied to the RAF Charitable Trust for the next stage in his training, the six week, 33-hour Sir Michael Knight Flying Scholarship which funded his Private Pilot’s Licence back at Tayside Aviation.

Flying solo within 11 hours, Tayside Aviation then nominated him for the RAF Flying Excellence trophy, which he won, along with £5,000 towards his flight training.

“It was at that stage that I approached Jim Watt, managing director of Tayside Aviation,” continued Paul.

“I figured that, if I didn’t ask, I wouldn’t get so I told him how much I wanted to be a pilot. Because he had seen the potential in me, he offered me a place on the degree programme, starting in April 2019.”

Within three years from now, Paul could be working as a pilot with a commercial airline. His long-term goal is to be a Training Captain due to his love of teaching and inspiring others.

Despite his success at sponsorship to date, the biggest financial hurdle lies ahead, with around £60,000 required to fund the cost of the flying training.

Paul has secured vital funding from Middlesbrough-based engineering company Intelect who awarded him £1,000 to fund the 14 compulsory exams he will sit in the first year of the course. His family and friends also raised £1,000 by completing the Yorkshire Three Peak Challenge.

James Watt added, “Paul is a very talented, driven and investable young man, with a strong work ethic. The perception is that you can only become a pilot if you’re wealthy – however, Paul’s efforts and commitment prove that hard work and drive can make a huge difference.

“Now that Paul is on the degree, he’s in the right environment to attract additional funding and we will certainly support him with his efforts.”