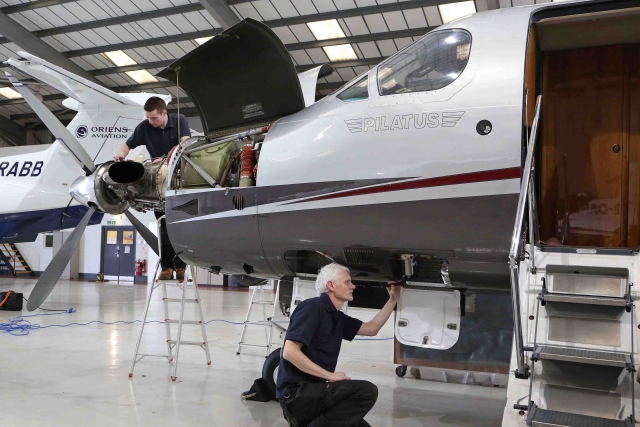 Oriens acquired the 18,000sqft Maintenance, Repair and Overhaul (MRO) facility from Avalon Aero, which has decided to concentrate on its BAE 146 business at Cranfield Airport.

The factory-authorised Pilatus Service Centre will be run by new Director of Engineering Dave Plumpton, who has almost 40 years of airline and VIP aircraft experience.  Steve Westran from Avalon Aero will work alongside him and continue to be responsible for the daily operation of the hangar and maintenance services.

Oriens Aviation brought five new aircraft into service in 2017, including selling its original demonstrator (G-RABB) and securing its first new-build delivery position for 2018.

“Since securing the PC-12 distributorship in March 2015 we are pleased to have played a part in raising product awareness of this ultra-versatile, best-selling, single-engined turboprop, amongst business users and private individuals,” said CEO and owner Edwin Brenninkmeyer. Edwin has personally logged 4,000+ hours flying time in PC-12s, including more than 150 demo flights last year.

The recent change in EASA regulations allowing commercial operations in IFR conditions by single-engine turboprops is expected to open up the market for the PC-12 NG.

“We are well placed to play a facilitating and advisory role for UK based commercial operators, or European PC-12 operators, and assist any owners who may choose to put their aircraft under aircraft management and gain revenue from charter,” said Brenninkmeyer.