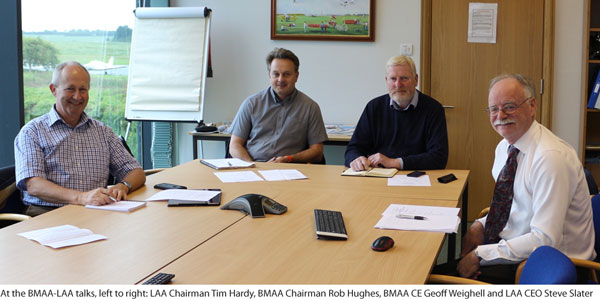 “Or maybe we’ll merge entirely. The focus is on what is best for our members and whether any closer cooperation would be of benefit to our members.”

The talks were initially prompted by the impending opt-out from EASA regulation of 600kg factory built aircraft, and working out how how the associations’ technical teams could work together to maximise the benefit.

The official statement from the two associations:

The Chairmen of the LAA and BMAA have initiated informal discussions to explore where both associations, working together, could harness their respective areas of expertise for the benefit of their members.

The discussions are likely to be wide ranging and will note areas where views are shared, but will also include how the associations’ technical teams could work together to maximise the benefit of the impending opt-out from EASA regulation of 600kg factory built aircraft.

The Chairmen, Rob Hughes and Tim Hardy, have approached this joint initiative with enthusiasm about the possibilities of their associations working closer together and look forward to communicating further developments to the members, staff and the wider aviation stakeholders in due course.