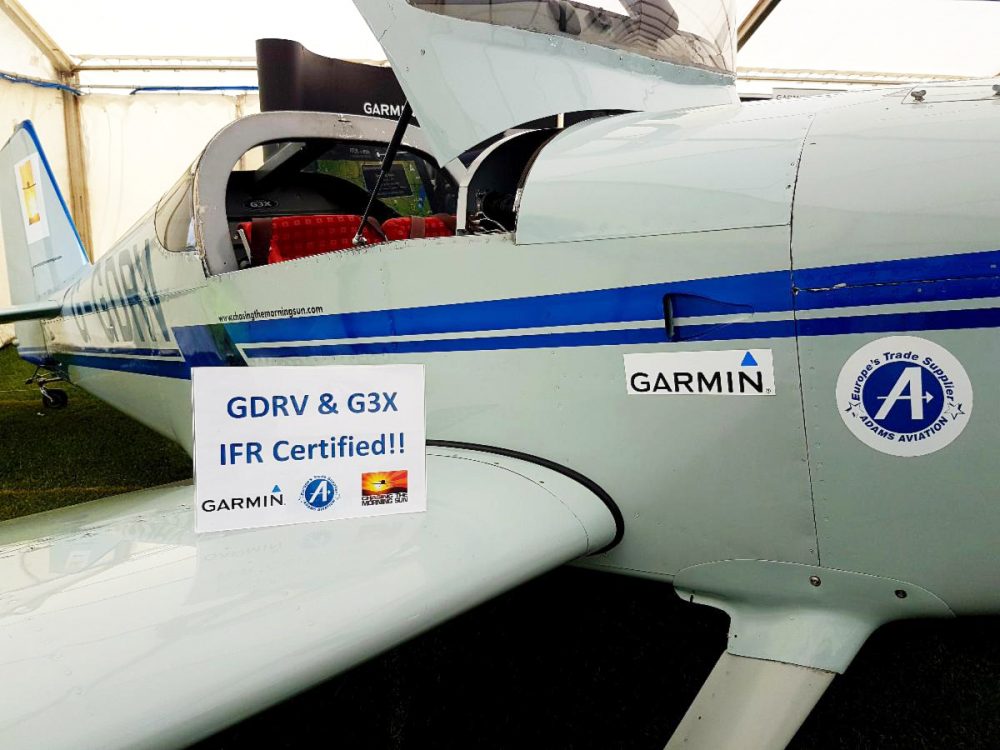 The Van’s RV-6 of round-the-world pilot Manuel Queiroz is the first homebuilt aircraft in the UK to be approved for IFR flight fitted with a Garmin G3X Touch as the primary flight display and a Garmin G5 as back-up.

The LAA has approved the installation despite rules saying two uncertificated devices from different manufacturers should be used to avoid common failure.

The project has taken over three years with the first stage being completed 18 months ago when VFR approval was gained for the use of the G5 Electronic Flight Instrument as an acceptable combination with the Garmin G3X Touch Flight Display.

Ben Smith, Garmin’s UK Sales Manager, said, “Working in conjunction with Manuel and Adams Aviation, the whole team involved has spent a lot of time and effort over the years in consultations, information sharing and training with the LAA for this new technology to reach this point.

“This now sets the standard for the G3X Touch to be approved for use with the G5 Electronic Flight Instrument for both VFR and IFR flight and there is now a specific example for others to follow, thereby making it much simpler for those who wish to emulate this standard.”

Manuel Queiroz is well-known for being the first, and so far the only pilot, to circumnavigate the globe in a British-registered homebuilt aircraft, setting six world speed records in the process.

“The units work intuitively with each other, are fully integrated and it flexible for future upgrades too,” said Manuel.

Manuel has also included an ADS-B transponder, for electronic conspicuity reasons. Traffic information received is displayed on the G3X Touch.

“The LAA technical leaflet (TL 2.28) that specifies rules for Permit IFR requires two uncertified devices to be from different manufacturers but Garmin has shown the designs of the two devices to be sufficiently different, and that they have met the requirements of the FAA and EASA, so LAA Engineering has accepted it is highly unlikely these will suffer ‘common mode’ failures and so can be used together.

“Manuel’s is the second RV-6 that has been approved. This time we were able to use the ‘Example-of-Type’ process for the airframe, a significant simplification from the ‘First-of-Type’ process.

“The avionics integrate very well together making it straight forward to make full use of all the capabilities offered by the equipment, including the G3X autopilot.

“This is a major achievement but is by no means the end of the enhancements that may be possible to make full use of the capabilities of the integrated system.”