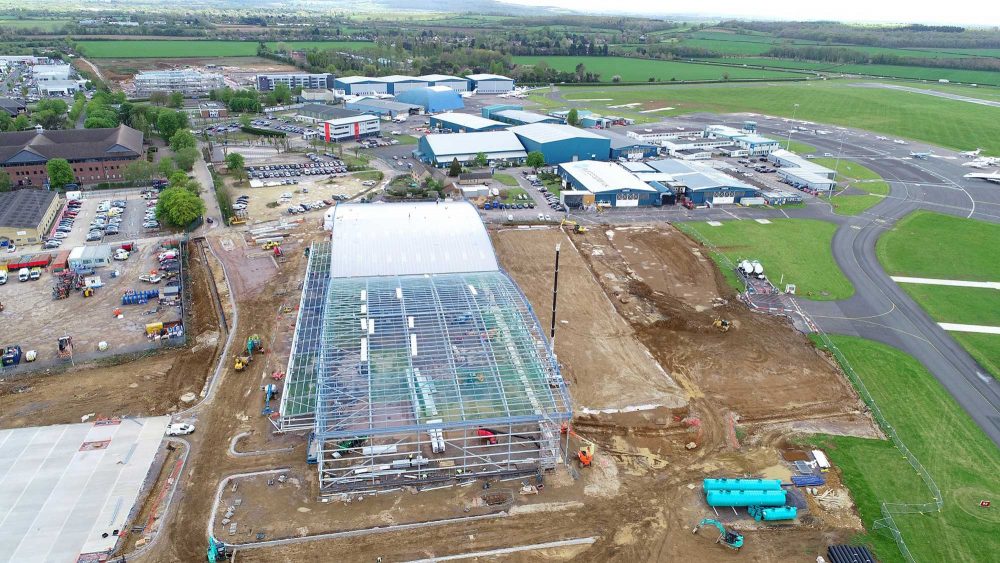 The work, expected to be finished later this year, is aimed mostly at the airport’s growing Business Aviation operators.

At the heart of the work is a 140-metre long hangar with two bays including rear offices, stores and workshops. It’s capable of holding up to six Bombardier Global, Gulfstream or Dassault Falcon Jet aircraft at the same time.

The new hangar will house mostly established tenants who will move out of the older WWII facilities, due to be replaced. They include Airbus Helicopters, Volare Aviation and Jet Maintenance International (JMI).

A large area of parking apron has been created and seven new ICAO/EASA/CAA-compliant helipads to support Airbus Helicopters and the growing number of commercial AOC helicopter businesses at the airport like MyHeli.

A new fuel farm will quadruple capacity of the original facility and provide future static tankage for Sustainable Aviation Fuel (SAF).  Business Aviation is progressively introducing SAF with up to 80% reduction in lifecycle CO2 emissions.

“In a new post-pandemic economic environment, it’s critical that the UK ramps-up its capabilities and capacity to provide growth and further employment, especially in high value, high-skilled and knowledge-based industrial sectors,” said Will Curtis, Managing Director.

“Aerospace and aviation are set to rebound and business aviation is leading the charge, so timing is crucial.

“Now we have put in the infrastructure for growth, we can build further facilities with relative ease and speed and further bolster employment opportunities – adding to the near on 1,000 employees based on site.”

Head of Business Development, James Dillon-Godfray, added, “We have long-established maintenance, repair and overhaul (MRO) businesses that need to expand. These new developments allow us to move people around the airport to facilitate that.

“We are also in dialogue with several new entities about joining us in the next few years, for which this capacity is essential.”

London Oxford Airport has a varied mix of General and Business Aviation users, with around 10,000 passengers a year, and is an important pilot training base.

Last year saw the establishment of a new 100-room hotel at the entrance of the airport at the Oxford Technology Park.