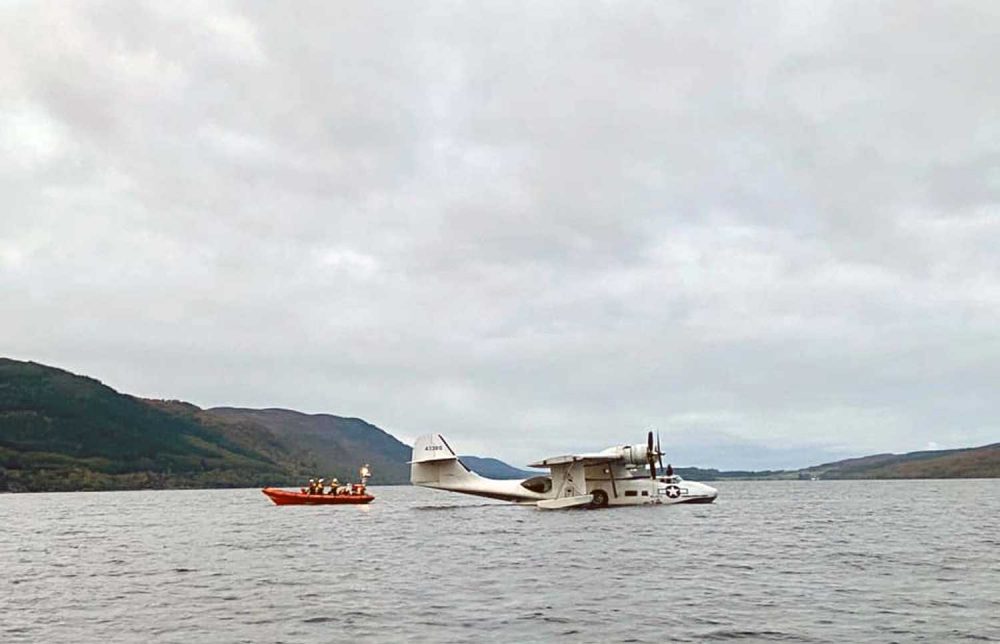 +VIDEO The Royal National Lifeboat crew operating at Loch Ness in Scotland had an unusual ‘shout’ over the weekend – Duxford’s Catalina drifting on the loch, unable to take-off or manoeuvre having suffered an engine failure.

The historic aircraft – one of only 20 airworthy Catalinas in the world – was not in immediate danger but it was heading for the rocky shoreline with the potential of severe damage.

“With daylight fading, the lifeboat was quickly launched, helmed by Neil S and crewed by David, Jack and Dan,” said the lifeboat crew’s social media.

“Their task was to tow the stricken aircraft to safety for the night, and recover its four occupants. This was easier said than done, for a number of reasons!

“With a wingspan of 32 metres, the WWII-era flying boat was too wide to recover to a local harbour or pontoon. Several options were discussed between the pilot, the lifeboat crew, the shore crew at station, and the Coastguard. Eventually, it was decided to secure it to a mooring buoy in Urquhart Bay.

“Towing the Catalina was challenging – there are not many fixing points on a flying boat! The best option was at the rear, underneath the tail, which only just cleared the bow of our lifeboat.

“This was a hazardous manoeuvre and required great skill and concentration from Neil to keep the rear of the lifeboat clear of the wings, as well as keeping crew members Jack and David safe, while they negotiated the tail to secure a line.

“The aircraft was towed slowly, stern first, with Dan managing the line, and keeping a close watch on the casualty. Upon approaching the mooring buoy, the next difficulty presented itself.

“Usually with a vessel under tow, the lifeboat will change from towing astern, to an ‘alongside’ tow, giving the lifeboat more control to precisely manoeuvre the towed vessel onto a mooring. This was clearly not an option! By now, darkness had fallen, and it was becoming increasingly difficult to locate the single mooring buoy in the bay.

“The volunteer crew succeeded in fixing the aircraft to the mooring buoy, whereby the pilot and three passengers could safely disembark. The lifeboat was then able to escort the aircrew across the bay to the harbour, where they met up with their colleagues, and the lifeboat could return to the station.

“A huge well done to everyone involved.”

The Catalina Society which operates the aircraft confirmed the incident, explaining that ‘Miss Pick Up’, as the Catalina is called, had been filming on the loch for a UK TV series.

“Unfortunately, after our last landing on Loch Ness yesterday afternoon, the starboard engine would not start and a failed starter motor was diagnosed,” said a spokesperson for the Society.

“After assessing options, the Catalina was towed by an RNLI boat to a relatively sheltered bay on the Loch where she is now moored.

“Sadly, before the RNLI rescue, another substantial rib-type boat impacted the Catalina’s rear hull and smashed the blister transparency.

“A plan is now in place and our engineer Garry Short will travel to Scotland and replace the faulty starter and patch up the blister sufficient for a short ferry flight to Inverness airport where a further action plan will be put in place prior to a return to our base at Duxford.”

STOP PRESS FLYER columnist Matt Dearden is a member of The Catalina Society and one of the aircraft’s pilots. He’s launched a fundraising campaign to make sure the aircraft is returned to Duxford before winter sets in. Contribute here