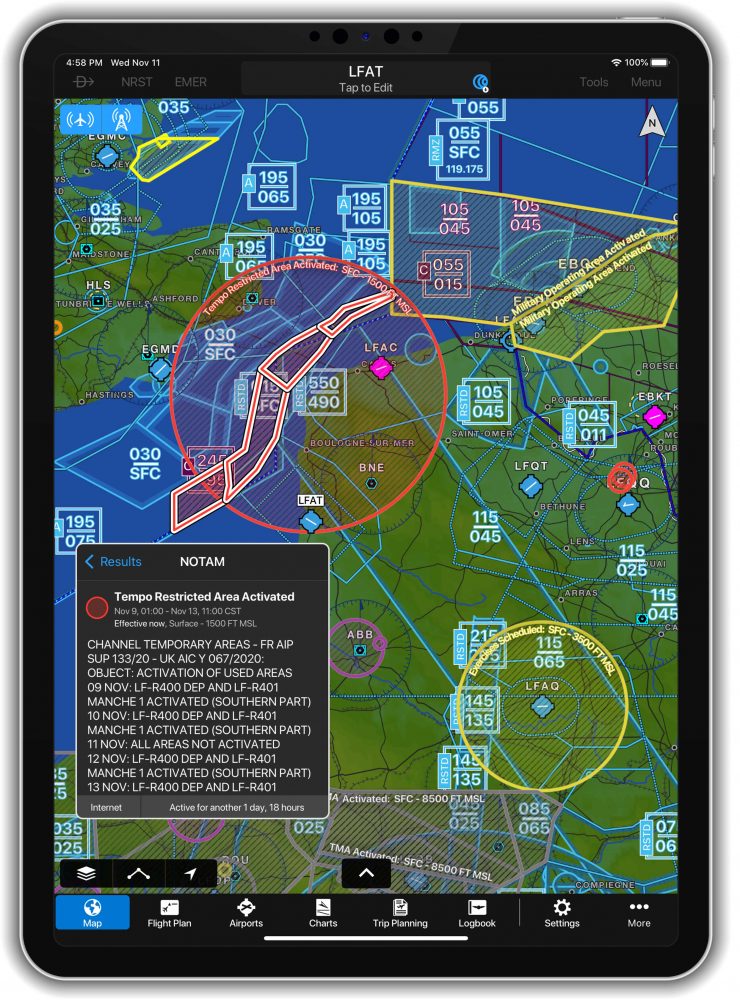 Garmin has added a graphic display for airspace and obstacle Notam on its Pilot app to aid pre-flight planning and in-flight awareness. The Garmin Pilot app works on Apple mobile devices.

The Profile View feature has also been improved giving faster access to important information such as weather, PIREPs and more.

The airspace Notam are overlaid on the map and can be depicted as a circle or other shape with the type and associated altitude.

Notam scheduled to become active in the next 24 hours are displayed in yellow to help alert pilots in advance and aid with flight planning, with a brighter contrast for areas showing upcoming restricted airspace.

Obstacle Notam use pink obstacle figures on the map to differentiate from permanent obstacles and are displayed anytime the Notam or obstacle layer is enabled. Obstacles that have been removed are displayed for reference as a pink ‘X’.

The new quick access bar in the Flight Profile View allows pilots to display critical flight information such as weather, PIREPs, and traffic from compatible Garmin ADS-B traffic sources with a single touch.

There’s also a new Pinch-to-Zoom capability to review parts of the flight by focusing on a particular segment while still being able to reference the basic flight profile above.

The newest release of Garmin Pilot, version 10.3 for Apple mobile devices, is available immediately. For new customers, Garmin Pilot is available in the Apple App Store as a free download for the first 30 days. Thereafter, an annual subscription starts at $79.99.