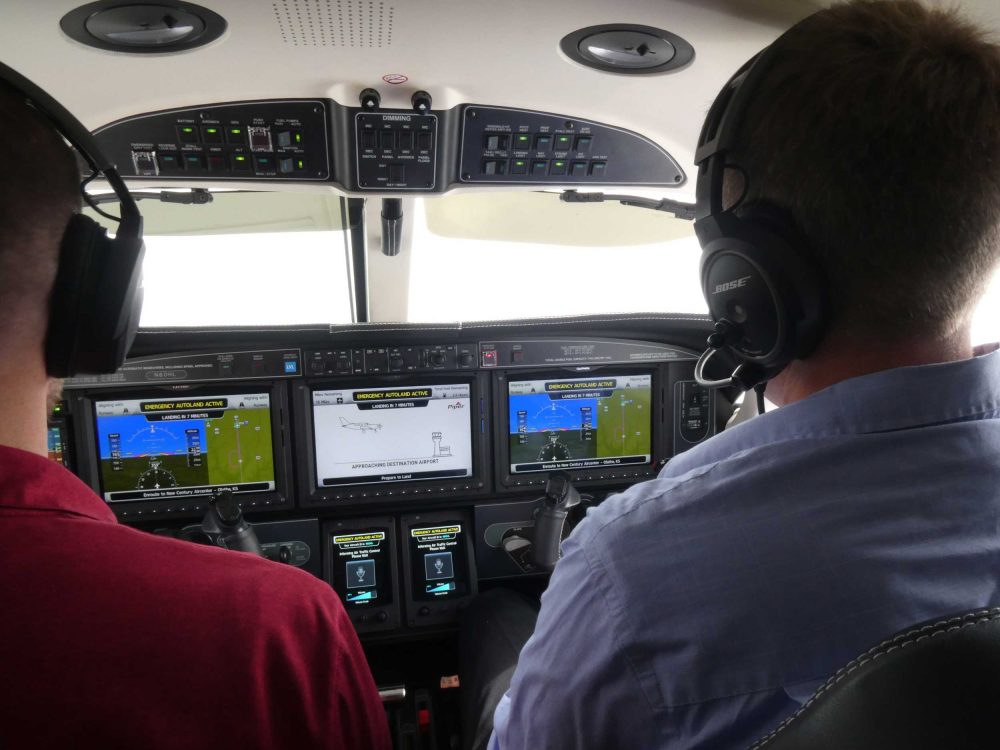 +VIDEO Garmin has announced the first autoland system for General Aviation aircraft. It will be offered initially on aircraft equipped with Garmin’s G3000 flightdeck.

Garmin says that, in the event of an emergency, Autoland will control and land the aircraft without human intervention. The Autoland system determines the most optimal airport and runway, taking into account factors such as weather, terrain, obstacles and aircraft performance statistics.

FLYER’s Joe Fournier had a pre-launch look at Garmin Autoland and even a flight in an aircraft fitted with the system. Here’s Joe’s report:

The thought of “what am I going to do if the pilot dies” probably goes through the mind of nearly every non-pilot passenger who rides in our aeroplanes.

This is probably doubly true in the higher end of General Aviation as the typical pilot who has accumulated the wealth required for a high-end aircraft is probably on the older side of the hill… and perhaps also accumulated a stone or ten of extra weight as well.

The conversation at home probably ends something like, “I see all those bacon sandwiches you eat at the clubhouse. You expect me to sit in the back and hope you don’t have a heart attack?”

Manufacturers, industry groups and flight instructors have all taken a shot at solutions to this problem.

‘Pinch-hitter’ courses aiming to teach a non-pilot to land safely, whole aeroplane parachutes and even initiatives to get spouses fully into flying. But these are at best imperfect solutions, although certainly better than the alternative of doing nothing.

Starting a few years back, whispers of Garmin experimenting with autoland starting circulating. When pressed, the folks at Garmin would politely smile and change the subject. It turns out that those early rumours were more of a science project than certification effort, mostly to judge just how far they had come and how far they had left to go.

After several iterations, the various pieces of the puzzle needed to make a workable system were in place and a formal development and certification effort began, culminating in what we have today, Garmin’s Emergency Autoland.

Garmin’s solution is as simple as it is bold. In the event of pilot incapacitation, just have the aeroplane land itself.

If you’ve ever sat through a fully-coupled GPS approach flown by a good autopilot, you’d know that the foundation for this has existed for some time.

Until now, autoland was the dominion of transport category aircraft and pilots. That sort of autoland is a complex to use, designed to be carefully configured and monitored by a trained crew. It enables operations in conditions that a human simply can’t operate safely in, such as near 0-0 visibility.

Garmin’s autoland is solving a completely different problem and takes a completely different approach. It starts with the idea that the emergency has already occurred and it is designed to save an aircraft and its occupants from what is almost certainly a catastrophic outcome as pilotless aeroplanes tend to be.

Questions surrounding Garmin’s reliance on GPS, a single autopilot and the system’s autonomous decisions about where and when it will land are countered and answered by the aeroplane already being in big trouble.

Garmin’s Autoland is designed to be used by a completely untrained user, with activation being as simple as pushing a single button. However, although it might sound omnipotent, at its heart the system is just a very smart autopilot and can be disengaged in the same manner as any autopilot would.

Once the system is activated, there are four basic problems that it is trying to solve. First, of course, is the physical act of flying the aeroplane.

The core of this is the GFC 700 autopilot, enhanced with the addition of autothrottle, a basic auto brake system and interfaces to aircraft systems like landing gear and flaps.

Next is the logic of airport selection, route creation, energy management, flying the approach and of course the landing and roll out.

Once the aircraft has sorted this out, the system has to communicate with its non-pilot occupants. To accomplish this, the flight displays enter a simplified mode for easy interpretation by a non-pilot.

Using plain language text, icons and voice, the autoland system communicates the landing airport, ETA and any action that might need to be taken such as fastening seat belts or staying clear of the controls.

Finally, the aircraft has to inform the outside world what’s happening. This is done with automated text to speech broadcasts on ATC frequencies and 121.5 about the aircraft’s position and intentions.

When autoland is activated, the system considers a number of factors to select the best airport to land at. First and foremost the airport has to have a GPS approach with some sort of vertical guidance (LPV, LNAV/VNAV or LNAV+V).  En-route weather, runway length and width, airport weather, winds, terrain, aircraft fuel state and air traffic control availability are all considered as the system chooses its destination.

The system will route itself onto final and if necessary enter a holding pattern on the approach to get on the proper vertical profile. Flightpath, power and aircraft configuration are managed as necessary and the aircraft is flown all the way to a stop on the runway.

While the discussion so far has been in the context of manual activation of autoland, the system can be automatically triggered. The reality is there have been a number of accidents where it appears that incapacitation occurred before anyone aboard was aware it was happening.

Carbon monoxide leaks, pressurisation and oxygen system failures have all played prominent roles in these types of accidents. Depending on manual activation would be an incomplete solution.

For some of these cases, existing features such as Emergency Descent Mode, Automatic Level mode or Electronic Stability and Protection already exist. Garmin has incorporated all of these features plus autoland under its new ‘Autonomi’ brand moniker, encompassing all of Garmin autonomous safety technologies.

The end result is EDM or ESP will protect the aircraft in the short term and if the pilot continues to be unresponsive, the autoland system will engage and land the aircraft.

It’s important to emphasise that should an incapacitated pilot regain consciousness and want control of the aircraft, autoland can be cancelled by simply disconnecting the autopilot.

So while the autoland system will take control if no one is flying the aircraft, the pilot always retains control if they are able to take it. And equally important should that pilot lose consciousness or control again, autoland would reactivate.

Earlier this year I had the opportunity to ‘fly’ an autoland-equipped Piper M600. The system was nothing short of amazing, while at the same time just a bit boring. After all, in this context ‘fly’ means push one button and watch it all happen.

After a normal takeoff and established in cruise, the demonstration began. By pressing the guarded autoland button prominently located on the right glare shield, I set autoland into motion.

After a moment, Autonomi selected the nearby New Century Airport in Olathe, Kansas and began routing itself to the final approach course. For the demonstration, the broadcasts to ATC had been suppressed and we manually coordinated our intentions with ATC.

About when you’d expect, out came the gear and flaps automatically, and using the autothrottle the aircraft slowed to approach speed.

Until reaching about 100ft AGL the approach felt like any other approach flown by a GFC 700 autopilot, but from there on things got a little more interesting. At something less than 50ft AGL the autothrottle began a power reduction and a flare was initiated.

The touchdown was on the firmer side of average, slightly right of centreline. Certainly not a ‘greaser’ but what you’d expect out of your average pilot having an average day.

The system gently braked to a stop and we ended the demonstration. Had it been an actual activation, the engine would have been shut down automatically so the occupants could exit safely. Impressive to say the least.

I must admit when I first heard the rumours of autoland, I didn’t find it a very exciting concept. I assumed it would end up being something that further pushed us further away from the art of being a stick and rudder pilot towards being button-pushing technicians. Because my mind was stuck on the sort of autoland that exists in the airline world, I couldn’t see its application in the sort of flying we typically do as useful, beneficial, or good for us as pilots.

But Garmin’s spin on autoland couldn’t be further from what I imagined. By leveraging an already capable autopilot with some new hardware and a lot of clever software it solves a problem that is very real to our non-pilot passengers. The system is presently only available on certain G3000 flightdeck equipped aircraft such as the Piper M600 and Cirrus SF50 Vision jet.

Both Cirrus Aircraft and Piper Aircraft have announced they will be offering Garmin Autoland on their top of the range aircraft. Cirrus calls the system ‘Safe Return” while Piper has named it ‘Halo’. Here are the two manufacturers’ videos on the launch: