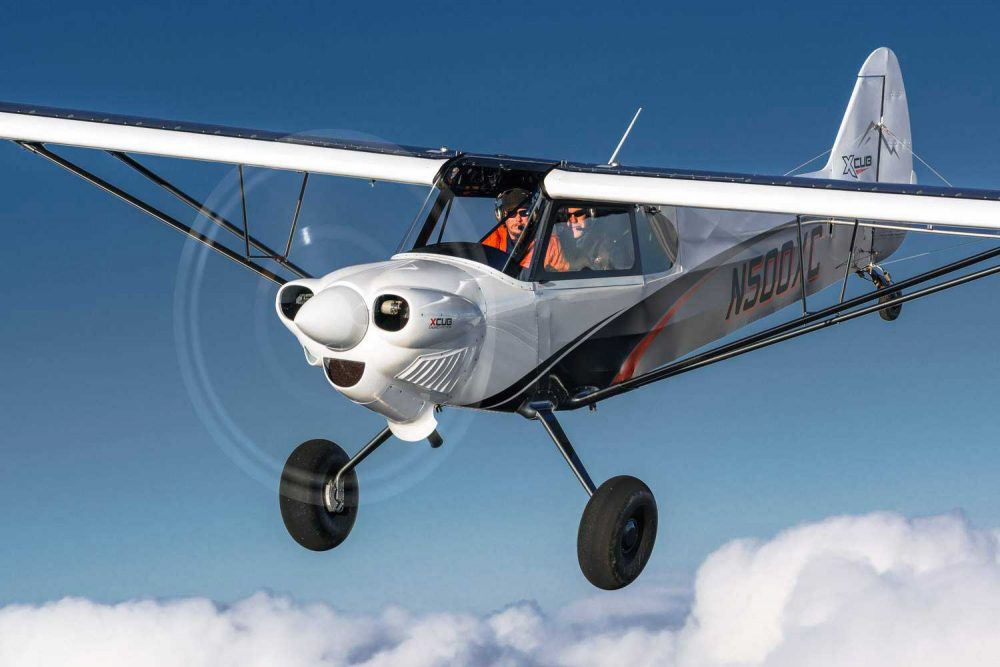 +VIDEO A Cub that can do 145mph? With a modern instrument panel and leather seats. And a payload of 1,084 lb? Factory-built, ready to fly and fully certified? And a price tag of $297,500? It’s the XCub from Cubcrafters and it’s just been certified by the US authority, the FAA.

“Six years ago I imagined a Part 23 certified Carbon Cub,” said Jim Richmond, CubCrafters’ CEO. “Our development team set out to design a Cub with terrific STOL capabilities, like our Carbon Cub LSA, but one that could travel faster and farther, while easily accommodating all of the gear that a pilot and passenger might want to carry for an extended journey.

“Now, after receiving Type Certification from FAA, I’m proud to say that XCub is much, much more than I had even hoped it would be.”

XCub has a cruise speed over 145 miles per hour at 75% power, according to Cubcrafters, and a useful load of up to 1,084 pounds. It is powered by a 180 horsepower Lycoming 0-360 that drives a Hartzell Trailblazer constant-speed composite propeller.

“Early on, when the first new airframe was produced, we discovered that our understanding of the Cub’s aerodynamics was incomplete,” says Richmond. “They fly nicely at 100 miles per hour, but at 140, everything changes!”

The company embarked on an ambitious two-year aerodynamic analysis of the airframe and all flight surfaces. That analysis motivated a fresh perspective on what can be achieved at both the lowest and highest limits of the speed envelope. Airflow over the prototype cowl, fuselage and wings was smoothed considerably. The sleek aluminum spring landing gear adds as much as 14 mph at typical cruise settings. Composite fairings were added to the attach points of the landing gear and struts. All new flight controls and empennage were developed, and the finished aircraft features a distinctive and stylish composite dorsal fin.

“As we flew at higher and higher speeds, we discovered that the dorsal provides welcome directional stability,” said Patrick Horgan, CubCrafters’ Director of Engineering and Product Development. “Cross-country pilots will appreciate the stable response to turbulence as well.” To refine handling, CubCrafters completely re-engineered the ailerons and the way pilots interact with them. Roll response was optimised by modifying the aileron airfoil and cove, and by re-positioning the hinge lines. This resulted in improved aileron response, lower lateral control loads, and natural centering.

Traditional cables and pulleys were replaced with a solid push-rod system, eliminating cable stretch. The ailerons are crisp, quick, and light, complemented by equally pleasing pitch response and rudder authority. The resulting control harmony makes this the most balanced Cub ever, said the company. Extensive use of ultra-lightweight carbon composites, titanium and aluminum keeps the weight low on the new aircraft. A CNC machined chromoly steel frame encloses the occupants. Meeting the latest FAA Part 23, Amendment 62, certification standard, XCub features robust construction and may be flown at up to 2,300 lb gross weight.

Pilot ergonomics received particular focus in XCub, said Cubcrafters. High seat positioning, low side windows, the vast skylight, and a low-profile instrument panel assure a commanding view – a rare attribute in a taildragger. The stick rests comfortably at hand, exactly where the pilot wants it. The handsome panel flows intuitively with engine controls on the left and lighting controls on the right.

XCub is not just functional, but comfortable as well. “Veteran Cub drivers will be pleasantly surprised at their first encounter with the XCub cabin”, said Richmond. Two bottle holders, four USB and two 12V power ports are easily accessed by pilot and passenger. A unique electronics console faces the rear seat and holds personal devices such as telephones or tablets, allowing the passenger to follow navigation with Garmin Pilot, or watch a movie. Thoughtfully located in the aft baggage bulkhead is a hidden locker for a headset.

“XCub is not just a new airplane; it is a new platform upon which we can build different configurations to fulfill different missions,” said company President, Randy Lervold. An example of XCub’s configurability is presented in the landing gear options. “Owners may choose legacy gear to achieve the lightest possible weight, or spring gear that provides better aerodynamics and speed,” Lervold said. Along with their new Flagship model, CubCrafters is also announcing factory-authorised flight training programs in partnership with Tac Aero in Hood River, Oregon. Tac Aero will offer programs ranging from primary through transition training for specific CubCrafters models, including XCub.