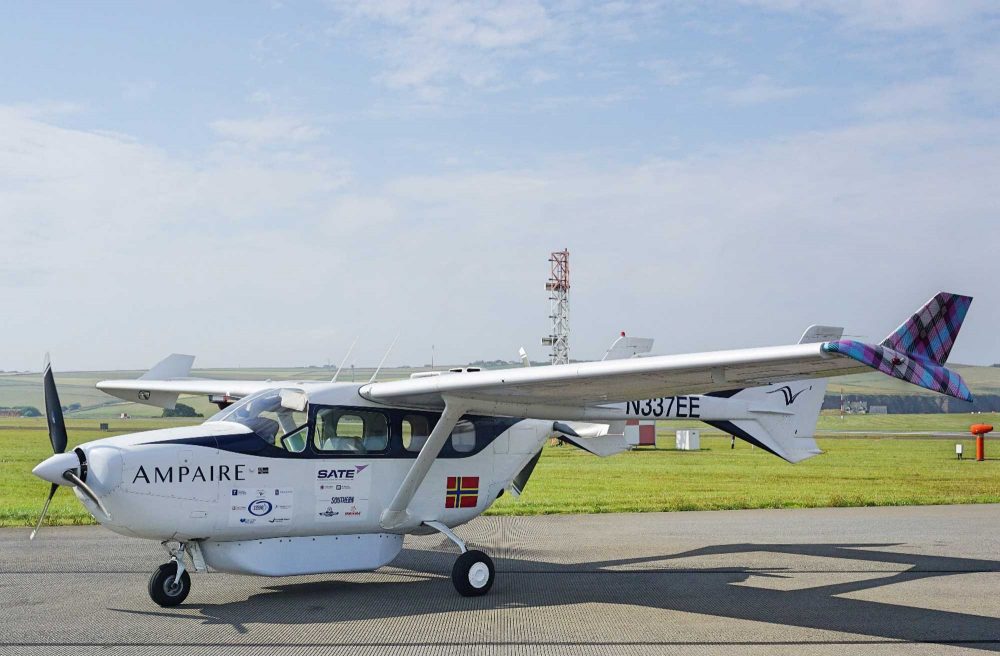 Ampaire has flown its first hybrid electric flights in the UK, crossing the Pentland Firth from Kirkwall Airport on the Orkney Isles to Wick John O’Groats Airport on the Scottish mainland.

It’s the first of a set of demonstration flights in the UK, with Ampaire expected to fly from Exeter Airport in coming weeks.

The trials are part of the Sustainable Aviation Test Environment (SATE) project, which is being led by Highlands and Islands Airports Limited (HIAL).

Ampaire is developing a line of hybrid electric powertrain upgrades that will reduce emissions and operating costs by as much as 25 percent initially, allowing regional airlines to better serve lifeline routes in Scotland and around the world.

Ampaire test pilot Justin Gillen said, “Today’s flight to Wick went without a hitch, flying at 3500 feet and 120 miles per hour.   The Electric EEL is easy to fly and we’ve achieved a total five hours here so far.”

Lorna Jack, chair of HIAL, said, “The SATE project is a very important collaboration for HIAL. Our involvement means we can support innovative projects from our partners to achieve a shared goal, decarbonise our operations and deliver environmentally sustainable aviation.

“Ampaire is leading the way in delivering electric-powered aircraft that could provide a viable alternative power source for the aviation sector. It is very exciting to see this technology being tested for the first time in Scotland and we are proud that Kirkwall airport is the hub for this and future SATE projects.”