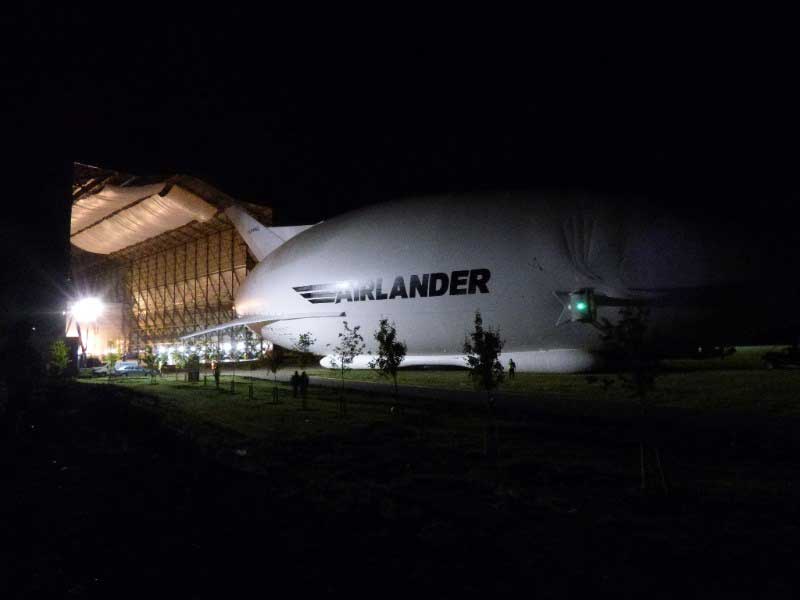 The Airlander 10 hybrid airship is out of its hangar for the first time and preparing for its first flight since its return to the UK and after a complete overhaul. The aircraft has permission from the CAA and EASA for the flight tests.

The team behind the Airlander, Hybrid Air Vehicles, finally pulled the Airlander out of the huge airship hangar at Cardington Airfield, Bedfordshire, at 4am this morning (Saturday).

Technical Director, Mike Durham said, “Last week we successfully completed our final in-hangar all engines, all generators, all systems testing. My thanks to the whole business for getting us here. The entire team is looking forward to the final series of tests outside before taking to the skies for the first time.”

Airlander 10 is said to be the largest aircraft in the world, and exiting the hangar was a delicate operation as there was only a 6m clearance from the fin tip to the sides of the hangar doors. Airlander was then towed to rest at the primary mast site – one of the two that have been specially prepared for her on the airfield.

“It was a very smooth first journey for Airlander and she behaved beautifully. We’re delighted to have reached this significant milestone,” said Durham.

Now Airlander 10 is at its masting site, the aircraft is free to ‘weathervane’ – nose into wind as a result of being attached to the Towable Moving Mast (TMM) and resting on the Castering Ground Cradle (CGC), which supports the fuel tank and has its own set of wheels.

The date of the first flight will be announced after further ground tests.

HAV has asked for public cooperation by remaining outside the airfield boundary at a safe distance, and not to park on double yellow lines or verges of the A600 road running past the airfield.

Airlander gets ready to fly again