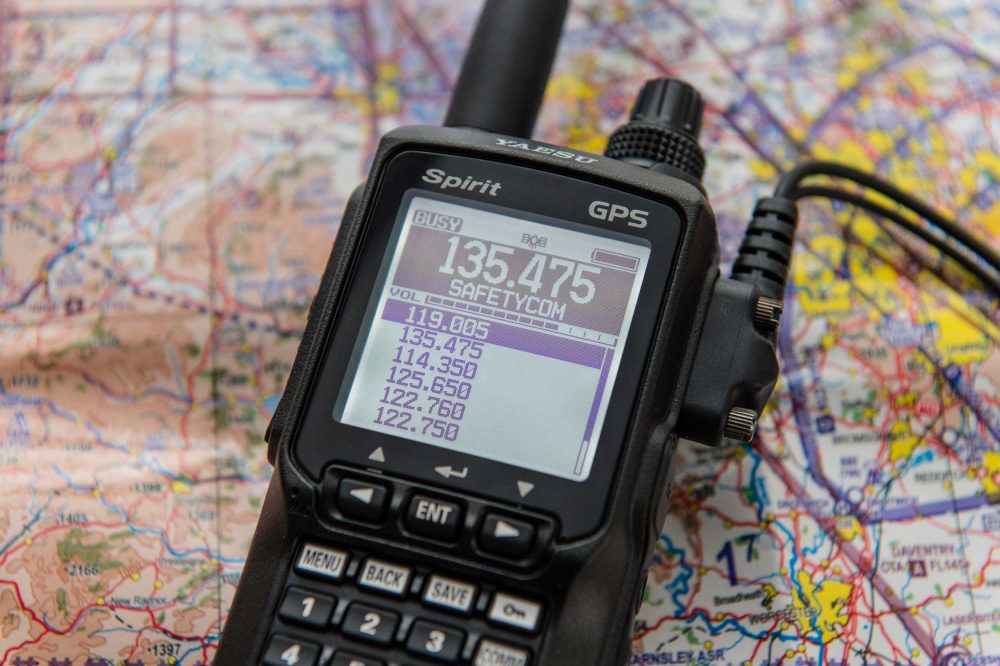 The cheapest way to equip for 8.33kHz
The ILS function could be a life-saver
The audio quality is better than some panel-radios we’ve heard

The 750L is a feature-dense transceiver that’s simple to use (once you’ve read the instructions) and brilliant value.

There are lots of good reasons for buying a handheld transceiver – there’s the obvious case of main radio or electrical system failure and I guess I’ve had about four or five over the years.

A couple involved failure of the radio itself and I’ve had two self-induced meatware issues – I once put my headset jacks in the P2’s plugs, so pressing the PTT and talking was a waste of time, and on another occasion, in an Auster, I completely forgot to turn on the battery that powered the radio.

Then there’s the thundering express train that is the 8.33kHz mandate, the deadline of which has now passed. I know that quite a few people are still waiting for new hardware to ship, while others already have their radios but are waiting for a slot at their favourite avionics workshop.

Happily, and perhaps uniquely in Europe, the UK CAA has issued an exemption, meaning that the 8.33kHz requirement can, in certain circumstances, be met by carrying and using an appropriate handheld. If you’re non-commercial VFR in the UK only, you should be good to go.

There are a couple of radios that fit the bill – the CAA’s exemption actually lists some of the acceptable models – and of late we’ve been taking the Yaesu FTA-750L Spirit flying with us, to see how it copes. Clearly, this transceiver packs an awful lot of features into its small body.

You obviously get 8.33kHz spacing, then there’s the ability to fly an ILS, pick up and navigate via VORs (as if anyone does that outside of the training environment), and if all that isn’t enough there’s built-in GPS too. Blimey…

Obviously, being a bloke, one who’s impatient and of an older generation, I had no use for the supplied operating manual. Out of the box it was fairly clear where the battery went, how the desk charger worked and how the supplied headset adapter could be added or removed swiftly, with the aid of a screwdriver or perhaps even a small coin.

How hard could it be? Well, hard enough for me to not be able to instantly tune 8.33kHz frequencies, Ed the Ed(itor) was on hand, and being far more patient he flicked through the manual and pointed out that the frequency spacing (25kHz or 8.33kHz) had to be selected from within the unit’s settings. That done, 8.33kHz frequencies could be entered at will, as could 25kHz frequencies at the same time – it’s both, rather than either/or.

Following that minor embarrassment, I too flicked through the manual before taking the 750L flying. With the headset adapter in place, I arranged to try a few transmissions, to test its clarity, with the ever-helpful Gloucester Approach. My first go, at about 5nm, resulted in a ‘carrier wave only’, a situation which was resolved by going back into the set-up menu and selecting internal rather than external microphone – I’m used to things like this auto-sensing, well, that’s my excuse.

Now properly set up, Gloucester Approach reported Strength 5, and that’s just with the ‘rubber duck’ aerial, inside the the aircraft’s cabin. Obviously, range is dependent on position and shielding, among other things, but clearly it’s more than good enough, particularly if you’re using the 750L as a backup in case of emergency (or to meet that requirement).

It was time to test the nav features, and tuning to the BCN beacon gave accurate results – but a charged smartphone and a navigation app would be an even better backup.

Again, Gloucester Approach helped out with a procedural ILS, and the ever-brilliant Garmin GFC 700 Autopilot did a fine job with the localiser and glideslope, both being shown perfectly, alongside LOC and GS tags in the 750L’s display. Clearly, you wouldn’t want to make a habit of flying the ILS with the 750L in one hand and the stick and throttle in the other, but if you’re having a really bad day then the Yaesu is a great fallback.

The built-in GPS is okay, but it doesn’t come with an aviation database of any kind, so if you’re a ‘glass half-full’ kind of person you may want to program in some useful waypoints, to help you navigate the amount of poo that would’ve had to hit the fan for the 750L to be needed to save your bacon.

Talking of programming, in addition to the GPS waypoints, you can store and name up to 200 frequencies.

There are, of course, all sorts of other features, like voice-activated microphone (only for use with headsets), vox and sidetone sensitivity adjustment, a stopwatch and countdown timer (complete with audio alarm), and something called Dual Watch, which enables you to set a priority channel that will break through if someone transmits on it while you’re tuned elsewhere.

The bottom line is that the 750L is a feature-dense transceiver that’s simple to use (once you’ve read the instructions) and brilliant value.

Extensions to licences and 8.33 funding

8.33kHz confusion reigns in Germany too