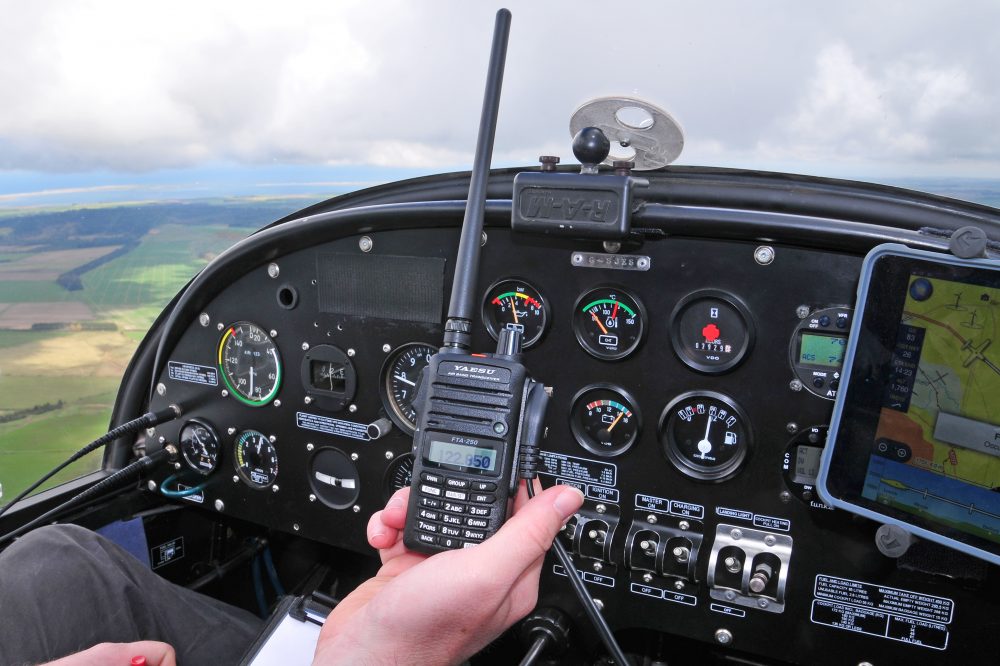 The menus are a bit fiddly

The past eighteen months have been big in the radio market, with dealers working hard to grab a decent portion of the business generated by the 8.33kHz transition.

At the end of 2017, a last-minute contender emerged, in the form of the diminutive Yaesu FTA-250L handheld transceiver. The CAA LA301075 compliant 250L unit builds on the success of the Japanese company’s popular and competitively-priced 450, 550 and 750 handheld transceiver range.

Opening the box, the first thing that strikes you is that the FTA-250L really is a dinky little thing, at a mere 52 x 105 x 30mm (2.1 x 4.1 x 1.2in, in ‘old money’) and only weighing 300g with the aerial, battery and belt clip. The new battery took just over three hours to fully charge in the supplied cradle and it also comes with a cigarette lighter-type charger.

Inevitably, I dived straight in, only to find that random button pressing really wasn’t going to allow me to successfully navigate this feature-rich transceiver. With the operating instructions recovered from the recycling bin, I soon got to grips with the menu hierarchy. The LCD screen is small but backlit and clear. Importantly, the FTA-250L does require some disciplined manual reading if you’re to make the most of it.

At home, I changed the 25kHz default to 8.33kHz channel spacing and amused myself by listening to Newcastle Radar. The FTA-250L’s speaker is very clear and plenty loud at 700mW while its fifteen levels of squelch are accessed via a menu.

The memory will hold some 250 channels, which you can name, but I found that it’s just as easy to punch in the new frequency rather than scroll through the memory. However, there are side buttons that allow you to toggle through the last nine entered frequencies, which I did find useful during the return journey.

My plan to field-test the radio at the annual EuroStar fly-in at Sywell was scuppered by low-pressure murk. But every cloud and all that, and instead we headed north to Glenforsa, in company with nine other EuroStars.

As an airfield handheld, the FTA-250L performed well, with aircraft at around ten miles and 1,500-2,000ft reporting clear transmissions from the 5.0 W PEP transmitter.

Yaesu is confident in its IPX5 standard waterproof protection rating – Google tells me that Level 5 means the FTA-250L will withstand water being sprayed from any angle, just don’t take it swimming. So I had no qualms about using it outside during a passing shower. So far, so good…

Rubber duck
A headset adapter is supplied with the unit and I was keen to test the FTA-250L in the air as a purely stand-alone handheld unit, using the ‘rubber duck’ aerial.

The adapter was quick and simple to fit, by taking two screws out of a rubber side panel and screwing the adapter in. To be honest, I didn’t expect too much and my fears seemed to be confirmed when no-one could hear me. So it was back to the operating manual, which saw me change the mic setting to external and also the sidetone from the ‘off’ default to ‘Level 1’. Hey, presto, wonderfully clear transmission, reception and sidetone via my standard David Clark headset.

I must say that I was really impressed and sat in the RH seat holding the radio in the palm of my hand, chatting away with the rest of the large formation as we made our way through the Scottish mountains.

I dual-watched Scottish Info and again got good reception range, where the mountains allowed line of sight with distant airborne aircraft.

Returning home, I spoke to Eshott at 16 miles/1,200ft and was reported as strength five, loud and clear. I didn’t charge the FTA-250L over the weekend and it was still going strong after eight hours of use – Yaesu claims up to fifteen hours but I suspect that would be low-intensity.

The rubber duck having given very good results, I believe the FTA-250L would work well mounted in a basic LAA type or microlight with an external aerial. With some resellers offering the unit for less than £200, it’s probably the most cost-effective way for a UK aviator to be 8.33kHz-compliant.

I’ve used an Icom handheld for many years, but I must say I’m very impressed with this sturdy, high-quality transceiver, which packs a huge punch in a tiny space. – Paul Kiddell