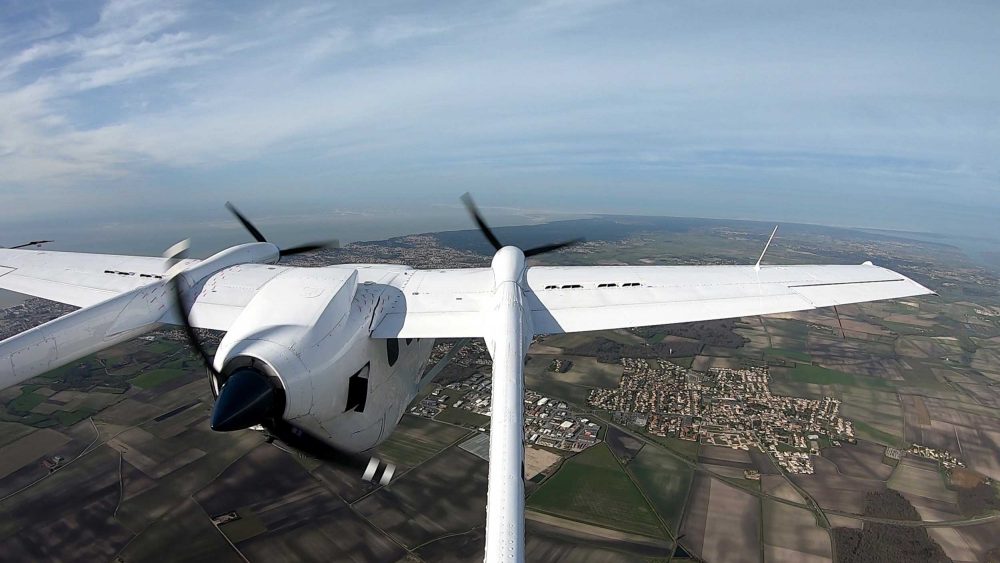 The Cassio is based on the fuselage of a Cessna 337, which has two engines mounted front and aft on the centreline. VoltAero has fitted two electric motors facing forward on the wing, removed the front piston engine and retained the pusher engine at the rear.

The two electric motors are from French aerospace company Safran Electrical & Power. The ENGINeUS™ 45 delivers a continuous power of 45kW and features built-in, dedicated control electronics.  It is part of a family of ENGINeUS motors going up to 500kW.

“I am very pleased with the testing as we accumulate time aloft and open up the aircraft’s flight envelope,” said Jean Botti, VoltAero’s CEO and Chief Technical Officer.

“Flying on the power of Safran’s ENGINeUS motors is truly remarkable, with no vibration and extremely low noise levels,” said Esteyne. “It confirms that our Cassio aircraft will bring an entirely new experience to aviation.”

VoltAero says the flight tests are a major step toward validating the electric and hybrid-electric powertrains for Cassio aircraft. The company is evolving a family of aircraft with four to nine seats, for operation by private owners and air taxi/charter companies for point-to-point regional travel, and in various utility category applications.

“Safran is proud to be powering the Cassio 1 aircraft as VoltAero brings a new dimension to electric aviation,” said Hervé Blanc, vice president & general manager of the Electrical Systems and Motors Division at Safran Electrical & Power.

“We are fully committed to supporting VoltAero throughout the flight test phase and look forward to the company’s future production of Cassio aircraft.”