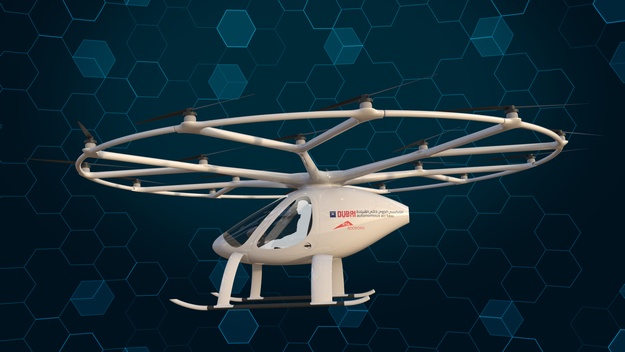 +VIDEO The Volocopter electric multi-rotor helicopter is to enter trials in Dubai with the government’s Road and Transport Authority. The tests will start in late 2017 using the second generation Volocopter, the 2X, as a self-flying air taxi.

“The test will start in the fourth quarter of 2017, and the project has been scheduled to run for five years,” said Alexander Zosel, co-founder of Volocopter.

“We are very grateful and proud that the RTA has selected us as their partner after rigorous testing,” said Zosel.

The Volocopter 2X has 18 rotors, fully redundant power trains and an intelligent autonomous control system to offer maximum reliability. Zosel sees the Dubai tests of the technology under extreme climatic conditions as an important point.

“We now have a fantastic opportunity to work with the RTA on the development and testing of the entire future ecosystem for safe autonomous air transport using Dubai as a first showcase project,” said Zosel.

The Volocopter’s maximum flight time is nearly 30 minutes at a cruise speed of 50km/h, and a maximum airspeed of 100km/h. It measures about two metres in height, and the diameter of the rotor rim, including propellers, is about seven metres.

Dubai plans to handle a quarter of all of its passenger travel using autonomous transportation by 2030.

“The German Volocopter Company was selected thanks to its compliance with the international safety and security standards, and passing the rigorous standards of the German Aviation Authority, which applies the highest safety and security in designing and operating aircrafts,” explained HE Mattar Al Tayer, Director-General and Chairman of the Board of Executive Directors of Roads and Transport Authority (RTA).

“The RTA is working with the Dubai Civil Aviation Authority to develop the legislative and operational guidelines, define specifications and standards applicable to operators in the emirate such that these legislations will be ready before the date set for the commercial and official operation of the autonomous air vehicles.”