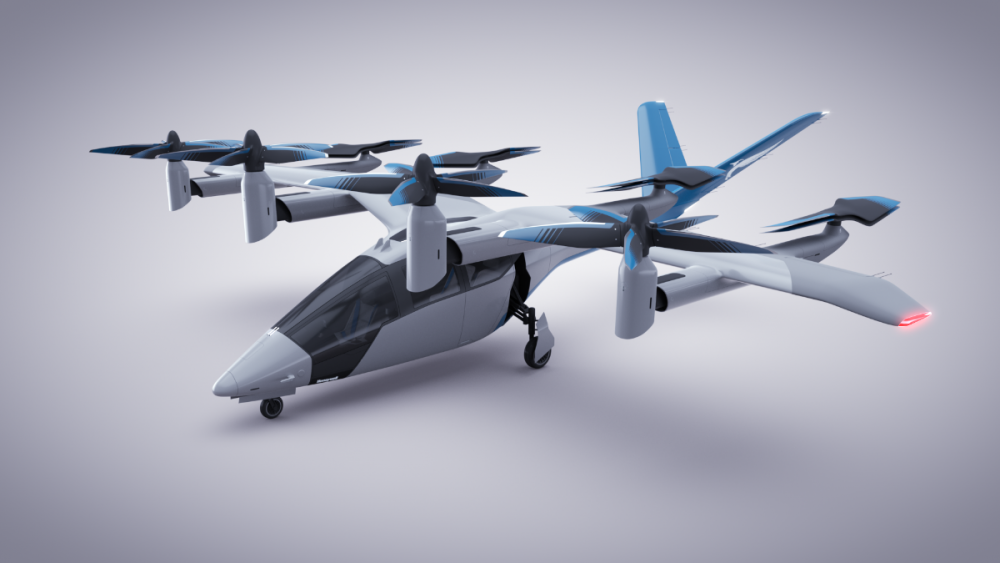 Bristol-based startup Vertical Aerospace has unveiled the design for its electric Vertical Take-off and Landing (eVTOL) aircraft – and it’s to be built in Britain.

The eVTOL is the VA-1X. It’s all-electric with four forward facing electric motors along the wing leading edge which swivel through 90 degrees for take-off and landing, aided by another four electric motor mounted horizontally at the rear of the wing.

Today we unveil Vertical’s fixed-wing eVTOL, VA-1X. It will be taken through certification with EASA in Europe and is on course to start commercial flights in 2024. Build will begin shortly, see here for more https://t.co/YY4fnn4N64 #evtol #uam #aerospace #verticalaerospace pic.twitter.com/Tm0uyQXPEi

“VA-1X has been designed with noise reduction in mind,” says the company release. “Using distributed propulsion and large open rotors, that have significantly lower tip speeds than on a helicopter, VA-1X can achieve noise levels 30 times quieter than an equivalent helicopter, allowing it to blend into inner-city life.

“Inherently, VA-1X will be exceptionally aerodynamically efficient, able to fly with far less energy and power than a helicopter would need.

“With cruise speeds of 150 mph and a range of up to 100 miles, you could travel from London to Brighton in approximately half an hour, compared to two hours driving, or an hour by train.”

Michael Cervenka, CEO of Vertical Aerospace, said, “With the launch of the VA-1X, we’re proud to be taking eVTOL one step closer to mass-market adoption, and supporting the next era of aviation.”