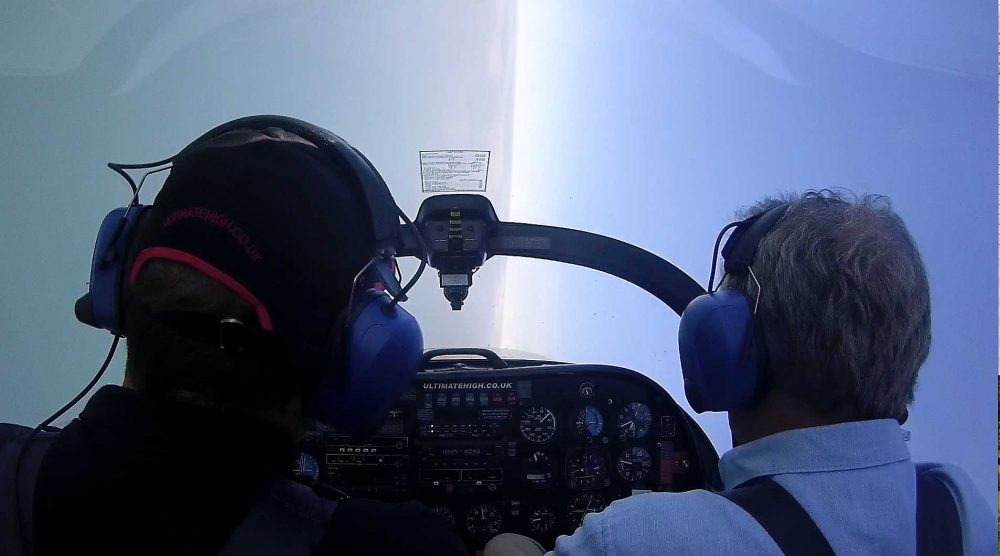 +VIDEO There’s a new emphasis on Upset Recovery Training, known as UPRT, because of various airline incidents where it appears the pilots may have lost or forgotten their handling skills.

It’s not just the airlines. General Aviation accident reports are full of incidents where pilots have demonstrated disorientation when encountering instrument meteorological conditions (IMC) or rusty flying skills. The aviation industry calls it ‘Loss of Control In Flight’ or LOC-I, and it’s the biggest single cause of accidents.

Until recently, Upset Recovery Training for most private pilots was limited to the ‘recovering from unusual attitudes”‘elements of PPL  training.

VIDEO at end and here

You remember: your instructor takes control, steers the aircraft all over the sky in varying attitudes, leaves it pointing up or down, and hands it back to you and says, “You have control”. This is also covered in the Skill Test but that’s possibly the last time you ever experience an unusual attitude.

That’s unless you’ve taken it into your own hands to get some additional training. If you’ve tried aerobatics then the first exercise you’ll do is recovery from a spin. You learn this because it’s entirely possible – some would upgrade that to ‘probable’ – that during an aerobatic manouevre it might go awry and pitch you into a highly unusual attitude leading to a spin.

It’s a bit of a shock, that first spin. It’s typically induced by the instructor by pointing the nose of the aircraft high, pulling back the power and as the aircraft runs out of energy, putting in a bootful of rudder. The aircraft flicks into a spin and the world starts to rotate.

Some instructors will let the spin ‘fully develop’ – a euphemism for keeping it going til one of you goes green in the face – before demonstrating the correct technique for recovering back to straight and level flight. The actual technique does vary from aircraft to aircraft although there are some common points, and can also vary according to the weight & balance.

But this isn’t for everyone. For instance, much as I enjoy the occasional aerobatic sortie, it’s only ever with a highly experienced instructor, the right sort of aerobatic aircraft, and at a height of at least 5,000ft. Higher preferably. Oh, and wearing helmets and a parachute. For a maximum of twenty minutes… after that my stomach has had enough.

Most GA pilots just want to fly from A to B, or have a general bimble around, without the drama, much like airline and most commercial pilots. Just the same, it’s good to be prepared and have an idea what to do should That Worst Day ever come around.

It’s with that in mind that Goodwood-based Ultimate High has developed a UPRT course for General Aviation. Ultimate High is well known for its max adrenalin tailchasing sorties and aerobatic routines including the ‘Utter Nutter’, mostly aimed at non-pilots looking for an extraordinary thrill. But it also has a serious side and that’s having played a major role in developing the latest regs for teaching UPRT for airline pilots.

The work that’s gone into those regs has filtered down to Ultimate High’s course for GA – and decisively changed the emphasis. Gone are the extreme manouevres threatening the stability of your breakfast. Nowadays, it’s about recognising the early signs that you’re about to depart from controlled flight and doing the right thing to avoid it.

The first thing you’ll notice is that Ultimate High’s training aircraft is the Slingsby T67 with side-by-side seating. Next, helmets are not worn and neither are military-style flying suits. This is all about normal, everyday flying.

I flew with Mark Greenfield, ‘Greeners’, who founded and runs the business. He starts with a ground briefing based on a Powerpoint presentation.

“First and foremost this is a confidence builder,” said Mark. “We want you to understand the mantra of Avoid – Recognise – Recover. To do that we’re going to expose you to a variety of attitudes and deviations from 1+g.

“We’ll implement and practice a simplified stall and upset recovery technique and develop a resilience to startle and surprise. We’ll build layers of protection against flight upsets and develop confidence and trust having successfully recovered from a variety of stalls and upsets in a ‘real’ environment.”

The full course is about three hours of groundschool going through the various reasons for an upset, plus a thorough briefing before going out for two flights. Two, because most pilots will become mentally maxed out during the flight and there comes a point with a rest on the ground is beneficial.

The groundschool is comprehensive, covers much more than the PPL, has elements of what can be learned from the airline pilot cockpit such as Pilot Monitoring and Crew Resource Management.

So, if you’re a pilot but on this flight a passenger in the front seat, you should be monitoring what the pilot is doing, how the aircraft is responding and noticing things that the Pilot Flying might just be too busy to take in. It’s a bit like being an extra pair of eyes looking out, which we all do, but also looking in, particularly at times of high workload.

Mark believes UPRT should be considered as an integrated component of pilot training, not as a standalone ‘bolt-on’. A considerable amount of time is spent of how to avoid flight upsets, broken down into three causes:

Crucial to everything is understanding Angle of Attack, not just in a climb but in all attitudes of flight, and a considerable part of the groundschool is spent on this. It’s what lies behind the AF447 accident (see below) and many others.

There are plenty of studies out there which break down upsets and give detailed responses to each. Mark thinks the chances of a pilot being able to recall all that detail in a moment of crisis are minimal, so he has boiled it down to a simple process:

That U-P-R-T for short. Should be easy enough to remember, right. Ok, let’s find out, let’s go flying…

What happened on flight AF447?
Air France AF447 went down in the Atlantic in June 2009 while on a flight from Rio de Janiero, Brazil to Paris, killing all 228 on board.

The aircraft, an Airbus A330, stalled after the aircraft’s pitot tubes became blocked with ice crystals, creating false airspeed data and causing the autopilot to disconnect. The pilots appear not to have recognised the stall, and continued to pull back on the sidestick in an attempt to get the aircraft to climb.

The final report by the French accident investigators (BEA) identified the incorrect actions as one of the causes of the crash. “The crew’s failure to diagnose the stall situation and consequently a lack of inputs that would have made it possible to recover from it,” said the report.

One of the BEA’s recommendations was that, “EASA review the content of check and training programmes and make mandatory, in particular, the setting up of specific and regular exercises dedicated to manual aircraft handling of approach to stall and stall recovery, including at high altitude.”

And that is what’s lead to UPRT becoming mandatory for airline pilots… and a good idea for the rest of us.

Flight training to restart from 4 July