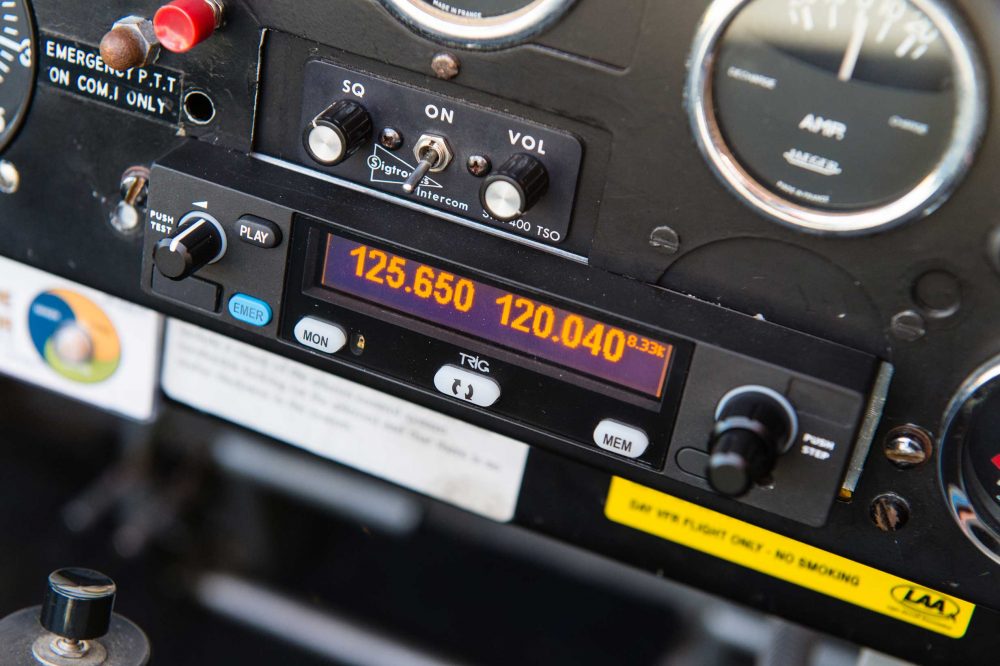 Uses a connector requiring an expensive crimping tool (a soldered version is available)
The BNC connector in the tray includes a tiny circlip that ‘pings’ all over the place (Trig, there must be a better way!)

Easy to install, and feature-rich unit

About a year ago I finally resigned myself to the fact that the radio in my Jodel was going to have to be replaced by a shiny new 8.33KHz capable successor. To be honest, the prospect didn’t fill me with much joy, but since it had to happen I needed a plan. My existing radio was a BendixKing KY97A which is a rectangular rack-mounted unit. Circular-style radios were out as I didn’t want to change the panel layout. The obvious replacement would have been a new BendixKing.

Unfortunately, the KY196B, which appears to be their only 8.33kHz offering requires 24 volts, not available in my little aircraft (not to mention being very expensive).

Looking at transceivers from other manufacturers another factor became apparent. The cross section of my  Bendix was only 1.35 in deep. A survey of my options revealed that almost all of them were too deep to fit into the slot vacated by the KY96, except for the Trig TY96.

Because my Jodel is on an LAA Permit to Fly, I could tackle the install myself. Getting started, I was pleased to find that provided I was prepared to retain my Sigtronics intercom, I could simply remove the connector used for the BendixKing and replace it with a D-type connector suitable for the Trig, while retaining the rest of the existing installation unchanged.

The only real issue was deciding which wire went where! Fortunately I was able to obtain the information I needed from the installation manual for the Bendix and the Trig installation manual. In fact the manual provided examples which, although not exactly corresponding to my situation, were close enough to reassure me that I was on the right track. There were disadvantages in taking this approach because the TY96 has a built-in intercom which, for example, enables the use of stereo reception if desired. However, I had always been very happy with the Sigtronics, so for me this wasn’t an important consideration.

So far as the actual fitting of the radio was concerned, removing the old tray and fitting the new one was fiddly but nothing more. The BendixKing tray is slightly longer than the Trig so the mounting supports needed adjustment and a few simple brackets had to be manufactured, but nothing beyond my basic engineering skills.

Switching the TY96 on, I was rewarded with no smoke and a bright display shining back at me! A ground radio check resulted in strength 5 both ways and, again to my considerable relief, I was untroubled by either interference from the engine or breakthrough from the transponder. After the installation had been signed off by my inspector, I carried out the flight test using Bristol Radar and everything checked out OK.

In recent weeks and with a good flourish of autumnal weather, I’ve managed a few hours with the TY96. Each time I’ve requested a radio check, so far it’s always been reported as strength 5. While the display is plain to look at, it’s very clear to see in all light conditions. I particularly like the ability to monitor the standby frequency, a facility which I find I am making more and more use of, which was not available with my old radio.

There is also a playback button which repeats the last transmission received. Originally I was intrigued by this but in fact I haven’t made much use of it. It’s fine for short messages, but if you forget a squawk code and it was at the end of a longer transmission, you’ll leave the controller hanging while the whole message plays again. For that reason, I still prefer ‘say again’. I am sure that some pilots will enjoy this option however.

There’s also a one-touch Emergency Button, that automatically sets 121.5MHz, along with a default mic and volume level.

One excellent feature is the ability to upload a database from a USB memory stick. Up to 200 frequencies can be entered using the radio to dial in six-letter airfield identifiers together with frequencies and type of service. This can then be downloaded to the memory stick. Or better still, you can input the data onto the USB stick with a .CSV file using something like Excel and then uploading to the radio. I have very quickly reached the point where I am hardly ever manually dialling in frequencies any more. You can also integrate the TY96 with a GPS (SL40 protocol) to automatically display frequencies as they are required along the flight route.

There is a configuration mode which allows you to set various parameters such as volumes and squelch sensitivities. There is also an option to turn off the 8.33kHz stations which would speed up tuning. However I just can’t bring myself to do this because I suspect that I may never need to switch them back on again. Having spent the money on an 8.33kHz radio, it’s a  thought I find too depressing to even contemplate!

Extensions to licences and 8.33 funding