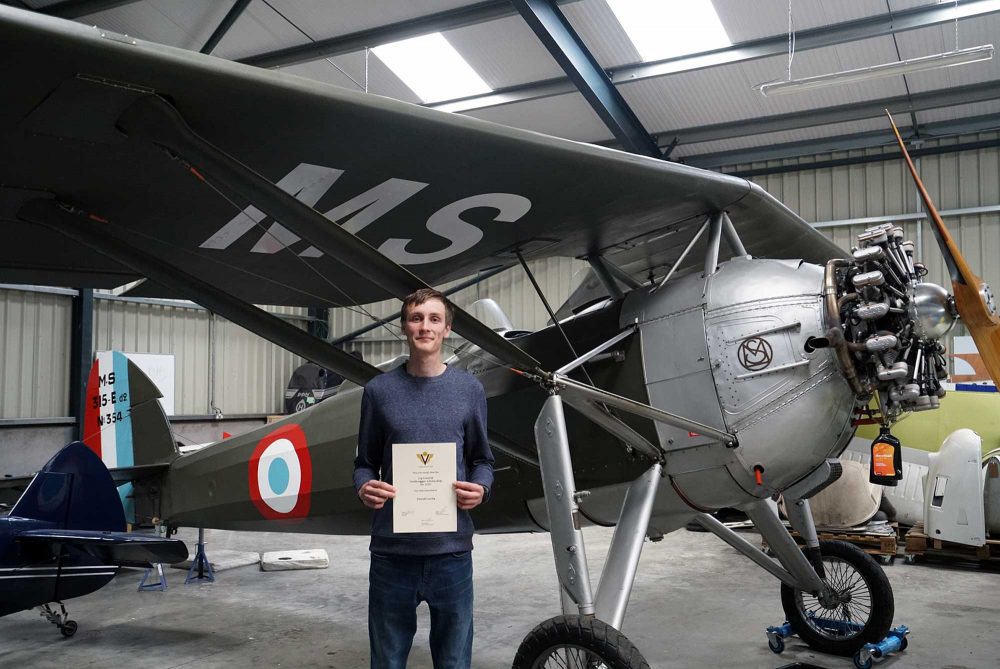 Not only is 24-year-old David flying the club Cessna 150 at Eshott Airfield but he’s assisting in the airfield’s engineering hangar working on a rare Morane-Saulnier 315, Chipmunk and Auster AOP6 aircraft.

AND he’s bought a non-flying Evans VP1 Volksplane without an engine from Old Warden to restore back to airworthiness. The man’s deserves the Taildragger Scholarship!

The award is named in memory of the late Tiger Moth pilot and flying instructor Liz Inwood, and funded by donations from the Vintage Aircraft Club, Light Aircraft Association and the Inwood estate.

It is aimed at young pilots who wish to convert from typical flying club nosewheel aircraft to older tailwheel types, potentially opening the door to flying a wider range of vintage and classic types.

David will be awarded five hours flying to assist in learning classic taildragger handling, which now forms part of the now-required differences training for older types.

“Despite the challenges posed by Covid, the Vintage Aircraft Club has continued to grow with more than 300 members involved with classic and vintage aircraft‚” said chairman Anne Hughes.

“This year’s Scholarship attracted a very high quality of entries, obviously keen to develop the skills to operate the older type of conventional undercarriage aircraft, or taildraggers, as they are more commonly known. David stood out with both his hands-on approach and clear enthusiasm.”

David added, “Being involved with unique projects at Eshott sparked the desire to restore my own aircraft. As a result I am currently rebuilding an Evans VP1 Volksplane, which I purchased non-flying and without an engine from Old Warden.

“The project is progressing well and I am looking to begin recovering the wings in the coming weeks. The scholarship will then equip me with the skills necessary to fly the aeroplane on completion of the rebuild.”