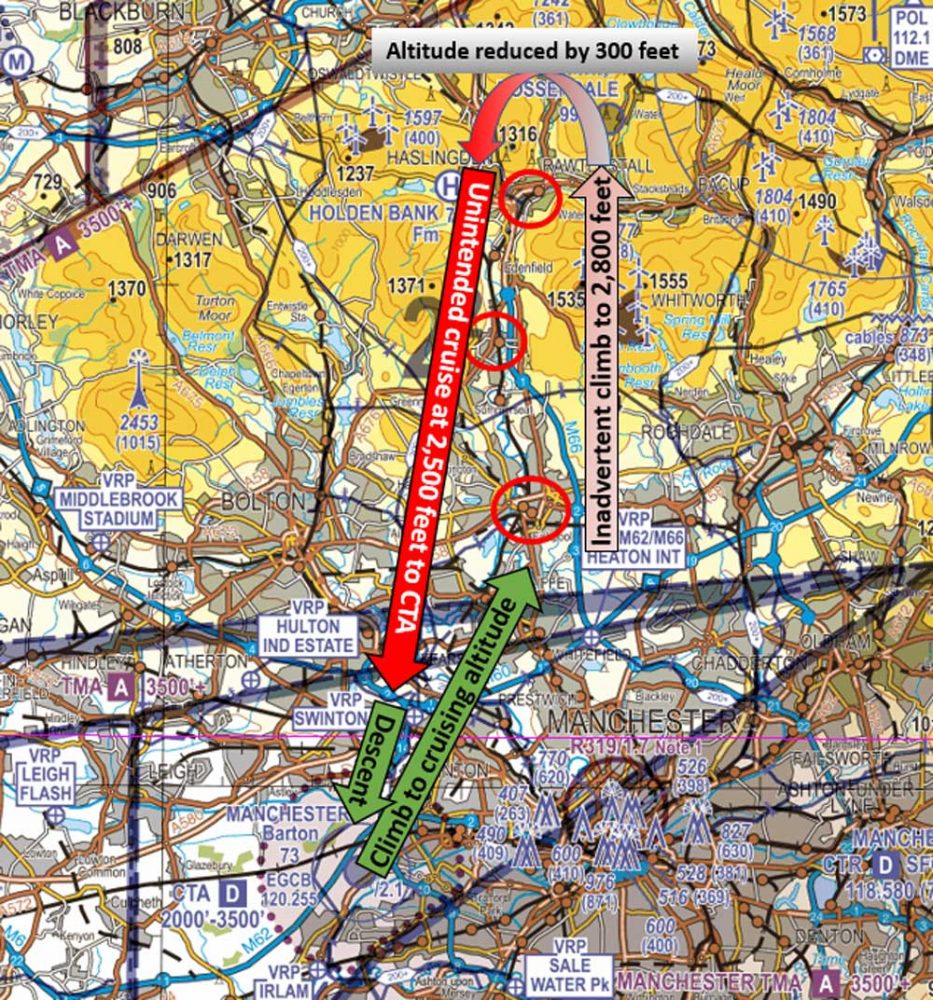 Looking forward to your first flight when lockdown starts to lift? Of course, but the tale of a microlight pilot based at Manchester Barton, making his first flight for months and who infringed the Class D Manchester CTA shows how a small mistake can spoil a good day.

The account of how the infringement unfolded and was resolved with the help of Barton’s ADS-B trial is the latest to be published on the Airspace Safety website. Below is an abridged version.

The Manchester radar controller was alerted to an aircraft squawking 7365 a few miles to the northeast of Barton aerodrome. The aircraft was indicating an altitude of 2,400ft. The base of the Manchester CTA is 2,000ft.

Mode S allowed the aircraft to be identified so the controller was able to contact the Barton Flight Information Service Officer (FISO). After a second call to Barton the aircraft descended.

The aircraft was inside controlled airspace for 3 minutes and 36 seconds before leaving the CTA. No other traffic was affected by the infringement.

The Barton FISO explained that the unit is part of an ADS-B (Automatic Dependent Surveillance–Broadcast) trial. This allows a FISO to offer generic traffic information (TI) to pilots operating within the unit’s designated operational coverage (DOC).

So how did it happen?

The pilot was carrying out a VFR sightseeing flight from Barton to Rawtenstall via Bury and Ramsbottom. On the day of the flight, met conditions were good. Visibility was in excess of 10km with some cloud detected at around 4,000 feet and a light and variable surface wind.

The pilot usually flew with a fellow pilot to supplement each other’s navigation, lookout and communications. On this occasion they [the pilot] were flying solo as the flying partner was unavailable.

The pilot was flying the EV97 for the first time in some months. The pilot was using a 1:250,000 VFR chart and a basic version of a VFR moving map application on their mobile phone. This was secured in a mount on the right-hand side of the instrument panel due to the location of the 12V socket and position of the mount.

The pilot explained that mounting a moving map is limited to the right-hand side as nothing can be fixed to the canopy. This meant that altitude information was very difficult to see from the left-hand seat.

The aircraft was not equipped with either strobes or a beacon and, due to its bare aluminium colour, the pilot was aware that it was harder to see air-to-air than white microlights.

The pilot remained on the Barton frequency throughout the flight and was in receipt of a Basic Service from Barton Information.

On the outbound leg, the FISO issued a warning of a much faster aircraft heading in a reciprocal direction. The microlight pilot’s focus turned to lookout, scanning all around in an unsuccessful attempt to catch sight of the aircraft.

Although trimmed for level flight, the microlight had started a gradual climb from Bury to reach an altitude of 2,700ft at Rawtenstall. Due to their focus on scanning, the pilot had not realised that the aircraft had climbed approximately 1,000ft above their intended cruising altitude.

On turning back towards Barton, and not realising they had climbed so much, a quick glance at the altimeter told the pilot that the aircraft was at *,800ft. Having intended to fly at around 1,700ft, the pilot mistakenly took this reading to be 1,800ft. It was really 2,800ft. The pilot started a gradually descent of 300ft to what they thought was 1,500ft, but was actually 2,500ft. This altitude was maintained the rest of the way back to the Barton overhead.

Overhead Barton, the FISO asked the pilot to check their altitude at which point they realised that the needle on the altimeter was pointing towards “2” not “1”. The pilot apologised whilst commencing a steep descent into the Barton circuit.

After the event the pilot analysed the occurrence, and noted a number of factors that led to them not noticing the higher altitude:

Had the pilot elected to obtain an air traffic service from the local LARS unit at Warton on 129.530MHz, the chain of events may have been broken.

On initial contact the pilot may have noticed the error when passing their details to the controller or, when they told Warton Radar that they were at 1,800ft, Warton Radar would have noted an error.

The pilot became task saturated. While trying to visually acquire the aircraft for which they received information they failed to note an inadvertent altitude change.

The pilot cannot be criticised for being risk aware and concerned of the developing situation. However, the use of an electronic conspicuity device on a larger display and/or the provision of an air traffic service are effective mitigations of mid-air collision.

Having operated the EV97 for some time some skill fade may also have been a contributory factor.

The pilot is commended for carrying out such a detailed post-flight analysis of the occurrence, their approach to the factors surrounding the occurrence and for following Just Culture principles.

In addition they immediately engaged the services of a flight instructor to obtain remedial refresher training to ensure that issues could be addressed and rectified.

September landing fees now live – save up to £68