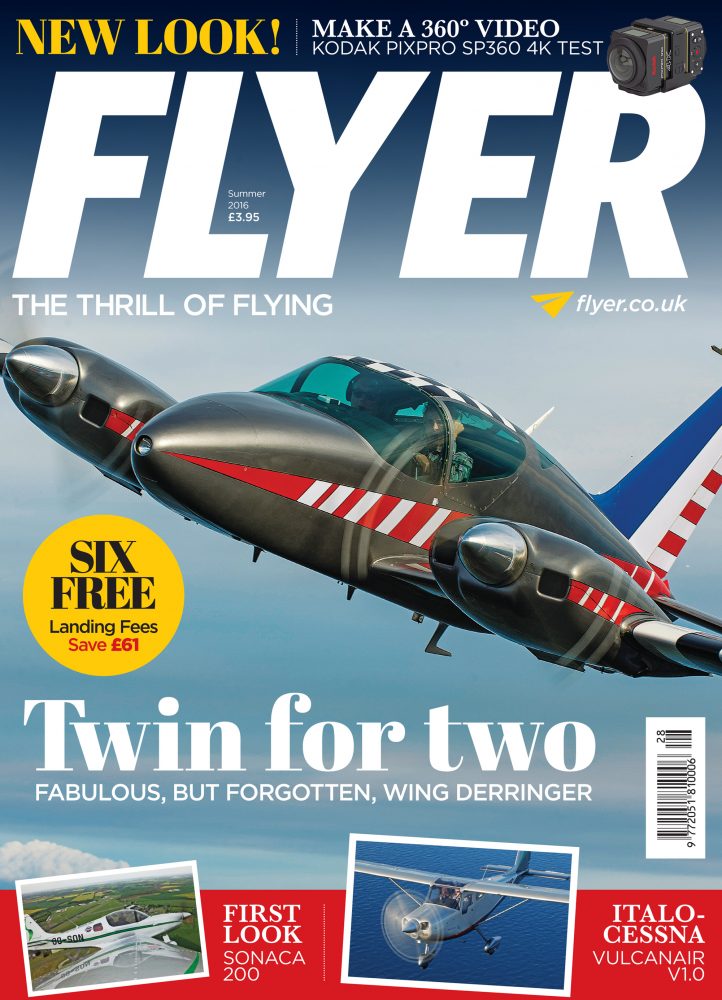 The latest edition of FLYER is out now with the spectacular Wing Derringer two-seat twin as the cover story and main flight test. Who’d build a two-seat twin? Someone with a real need for speed.

Also, this issue, we fly the new four-seater from Vulcanair, aimed squarely at the flight training market. Is it good enough to encourage schools to switch from aircraft like the Cessna 172 (which it closely resembles) or Tecnam’s PTwentyTen?

We also have quick flight in the new two-seater being planned by new European manufacturer Sonaca. OK, so it’s really a Sling 2 from South Africa but we talked to the engineers behind the Belgian project and find out how they’re tweaking it to make it stronger for flight schools.

The Flying Adventure this issue takes us all the way from the UK to Brazil, in the Long-EZ kitplane built and flown by Patrick and Linda Elliott. Brazil? Looks absolutely spectacular!

In Top Gear, we test the Kodak PixPro SP360 camera which produces a 360-degree video… you know, the ones you can scroll around and see different views.

Is it time to buy a pre-owned aircraft? We take a look at how the used aircraft market is shaping up at the moment. Yes, there are some bargains on eBay and elsewhere but know what you’re buying is the best advice we came across.

Then, of course, there are six free landing vouchers in the magazine, redeemable at selected airfields around the UK. Plus, news, the most entertaining and insightful columnists, That Worst Day and our packed classified ad section. If you’re not already a subscriber, what are you waiting for? Take advantage of our latest subscription offer:
3 issues for £3 here