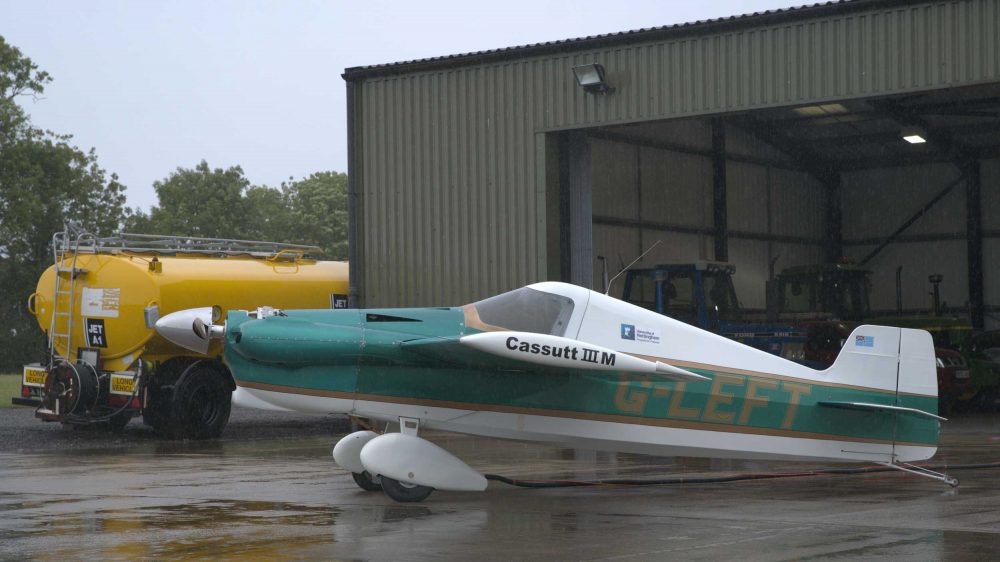 A British entry for the Air Race E (for Electric) racing series due to start next year has successfully completed ground tests.

The University of Nottingham team has developed, built and installed its own all-electric power train into a Cassutt IIIM airframe.

The project has been funded by the University’s Propulsion Futures Beacon of Excellence to investigate alternatives to the use of fossil fuels in global transportation systems.

The Cassutt III single-seat racer, which normally runs on an avgas engine, has been adapted to fit the integrated electric motor and other supporting power electronic systems such as cooling systems, pilot interface and controls.

Additional supporting structures have also been developed to house the batteries, which provide the motor with enough energy for the race mission.

Project lead Professor Michael Galea, an expert in electric machines and drives, explained the challenges involved, “Electric flight is one of the fastest developing technological areas and is seen as the third-generation of aviation.

“The rigours of air motorsport, with its demand for speed, performance and power management, has provided us with the perfect conditions to develop and promote cleaner, faster and more technologically advanced electric motor drives.

“Our drive has been fully lab tested to its rated speed and power, and a custom-control system has been developed to start the motor and control the speed from within the cockpit.

“A significant amount of time has been spent on getting the motor operating and communicating with the motor management system, a process which involved understanding, programming, connecting, and tuning all control systems.

“Our main design challenge has been to retrofit the electrical systems into the plane in place of the existing aircraft engine.

“The batteries take up a large volume in the nose of the plane and there is limited space to fit the battery housing, control circuitry and main power cables within.

“This must be achieved whilst maintaining a similar weight distribution and centre of gravity to the original plane.

“The challenge of fitting everything together inside the existing engine bay and achieving a similar weight distribution was overcome using 3D CAD models of the airframe and electrical systems to assess the best fit and stress analysis of the supporting airframe structure to check it would support the motor.”

Jeff Zaltman, CEO of Air Race E, added, “It is fantastic to see the truly amazing work being carried out by the team at the University of Nottingham as our collaboration continues to advance aviation technology.

“We are all incredibly excited about this project and to see the successful ground tests completed was a big milestone in our push to develop alternative transportation systems. I would like to congratulate everybody involved, and I can’t wait to see what else we can achieve together.”

The electric aircraft has been tested in-situ at an East Midlands aerospace engineering partner facility and it will be used as a static demonstrator at aerospace events, with the potential to be flight tested in the future.