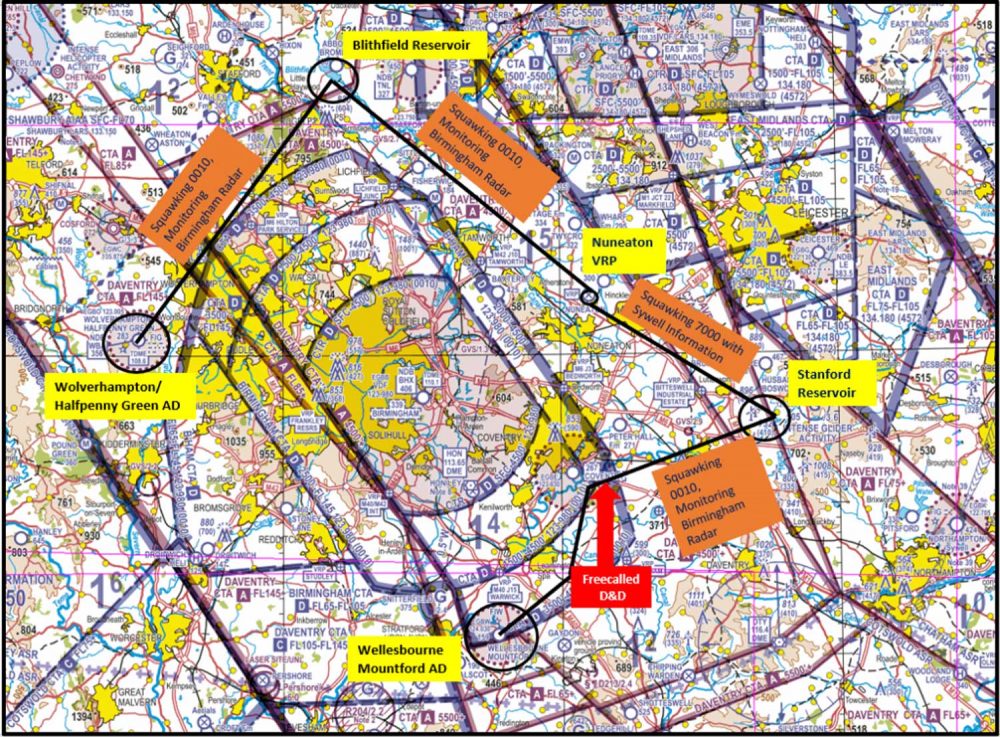 A student pilot on a solo PPL Qualifying Cross-Country flight infringed Birmingham’s Class D airspace despite having a ‘neat and comprehensive pilot’s log’ planned and reviewed with his instructor.

The account of the incident is the latest on the Airspace Safety Initiative (ASI) website. It took place last October on a flight from Halfpenny Green to Wellesbourne Mountford.

The route had been planned on a VFR 1:500,000 chart and a neat and comprehensive Pilot Log (PLOG) was produced using the methods taught on the navigation module of the PPL course.

Prior to departure, the student pilot and instructor reviewed the plan and weather conditions. The reported conditions on that day seemed to be reasonable and the flight was authorised. They discussed using the Birmingham Frequency Monitoring Code of 0010 to allow for easier identification when flying close to Birmingham’s controlled airspace.

After departure, the pilot noted visibility was good but the wind was much stronger than expected. This resulted in some challenges to maintain headings and the vertical instability of the air meant it was difficult maintaining altitude.

Therefore, a large portion of time was spent on maintaining the heading and altitude leading to a significant increase in workload in flying the aircraft. It also resulted in calculated timings not being as accurate.

During the leg between Blithfield Reservoir and Pitsford Water, the pilot became uncertain of location and circled above Nuneaton VRP several times to establish a positive location fix.

Continuing on with the route, the pilot flew over a body of water (Stanford Reservoir) which he mistook for Pitsford Water.

When the pilot turned onto the heading for Wellesbourne Mountford it was made too early and that put him on track towards controlled airspace.

The pilot realised he was flying in an area that did not correlate with the route plan and being unable to contact Birmingham, the pilot changed heading to south and called Distress and Diversion (D&D) on 121.500MHz.

D&D provided the pilot with a position fix and the pilot was able to navigate to Wellesbourne. On landing at Wellesbourne, the pilot immediately telephoned the instructor at Halfpenny Green and explained the enroute problems.

The ASI said the pilot had carried out good planning, building in prominent turning points and waypoints enroute. The route was to be flown 1,000ft above MSA which provided ample vertical separation from controlled airspace.

“In accordance with the Take 2 guidance (remaining 2nm laterally clear and/or 200ft vertically clear of controlled airspace) the planned route demonstrated text-book Threat and Error Management in this aspect,” added the ASI.

Crucially, the student pilot was not flying with a moving map. The use of a moving map had neither been taught in training nor encouraged.

The ASI points out that the CAA actively encourages all pilots to incorporate the use of moving maps in both pre-flight planning and in-flight. The Spring 2020 edition of TrainingCom states that it is important that instructors teach their students the use of GPS/GNSS aircraft systems when fitted to their aeroplane.

“The use of Moving Map displays should also be taught to enhance the student’s situational awareness once they have the basic Dead Reckoning (DR) navigation techniques,” continues the ASI.

“If the student uses these systems during solo-flying, this is permissible but they need to remember that they need to have the skills to later pass the licensing skills test.

“Therefore, it is the skills test that will be the time when the students DR Navigation techniques will be tested.

“Not only would a VFR Moving  Map have provided the pilot with this enhanced situational awareness as they approached what they incorrectly thought was their turning  point at Pitsford Water, but with a  properly configured display, a visual and aural airspace warning would have been given alerting the pilot of their proximity to controlled airspace.

“In this occurrence, the pilot is to be commended for their handling of a stressful situation where an infringement was resolved in a timely manner.

“In addition, despite limited experience in the aviation community, the pilot carried out a detailed post-flight analysis including the submission of a detailed and honest report.”