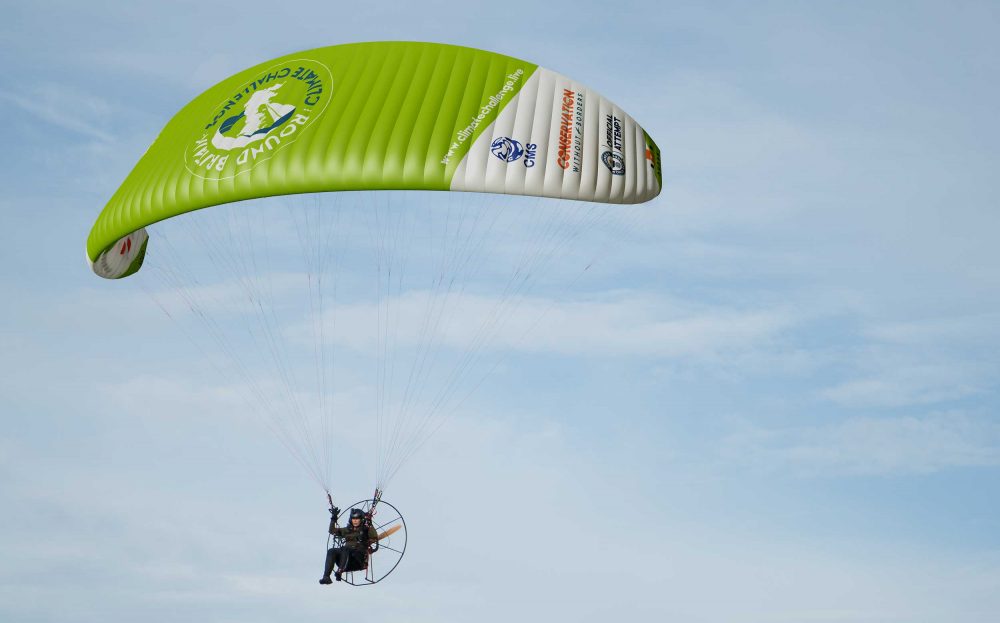 A circumnavigation of the UK mainland is underway by climate campaigner Sacha Dench flying an electric paramotor.

If Sacha, a UN ambassador on migratory species and founder of Conservation Without Borders, completes the trip it will be the first by electric paramotor, setting a new Guinness World Record.

The official launch of the 3,000+ mile trip was from Glasgow Science Centre on 18 June. Sacha will be travelling anti-clockwise around Britain, returning to Glasgow in around six weeks.

Her aim is to ‘inspire and excite the nation to get involved in tackling the climate crisis’ in the run up to the COP26 conference in Glasgow in November.

‘Human Swan’ Sacha Dench, known for global expeditions with migratory species, turned her focus to climate change for this expedition after losing her family home in the Australian bushfires.

“This is the first time an electric paramotor will ever have been used in a long journey – and it’s going to be an exciting challenge,” said Sacha.

“I want to capture the imaginations of the young and old, rural and urban, and focus on answers to the climate crisis – not problems – and encourage everyone, to get involved.

“As well as investigating how climate change is affecting different regions of the country, we will be showing – in a visually stunning and exciting way – what is happing to help cut carbon and preserve and restore our environment. We’ll be finding the likely and unlikely heroes and discovering where and what works.”

With rain, wind, and rocket launches working against us can you blame @sachadench for looking so happy this morning? #Adventure #Paramotor #FlyingFast #LiftOff #ClimateChange #ClimateCrisis #ClimateAction pic.twitter.com/DzDFmouvCJ