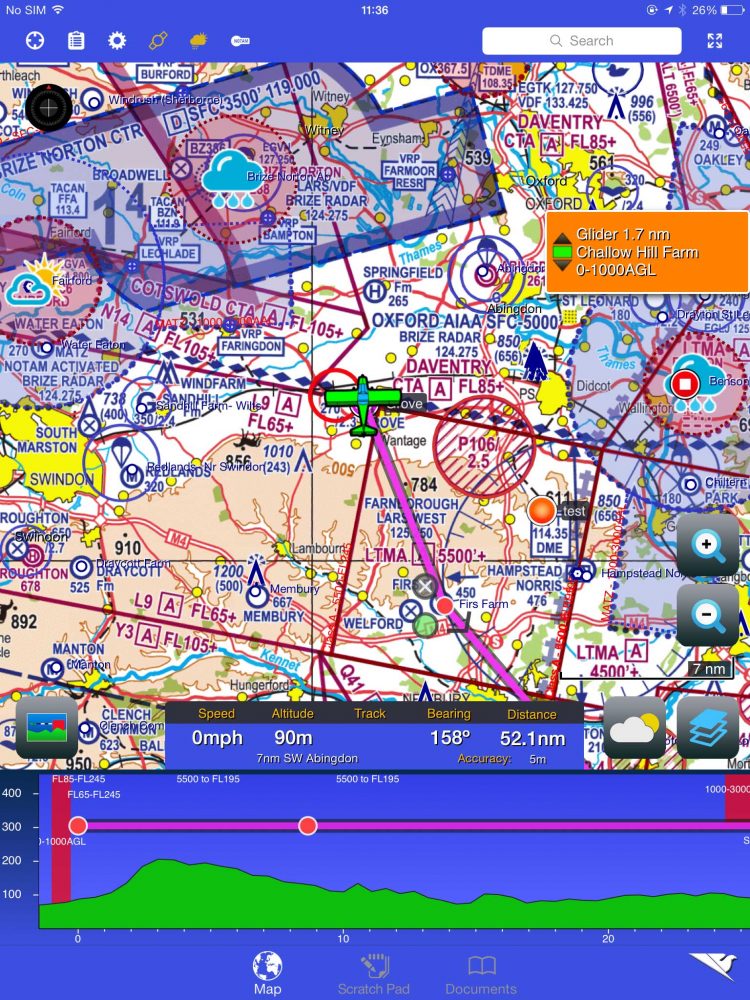 The latest update of RunwayHD is now available and includes a wide package of performance improvements – so what’s new?

RunwayHD has developed over the past year-and-a-half to include a range of assets from a simple airspace avoidance tool to a full planning solution. Importantly, it retains one of its key selling points, the fact that it offers electronic versions of the CAA maps, making it very simple to get used to the layout. That said, one of the main improvements this time around is to the non-CAA base maps at the lowest subscription level. Extra detail and a general refresh of the appearance of these straightforward vector maps make them much more usable than earlier versions.

Flight planning is by long-tap-and-hold on the desired waypoints or by searching and manually adding them. Most basic functions, meanwhile, can be figured out without recourse to the tutorial videos.

The range of charts, which can be managed and purchased through the app itself, is a big plus and the complex but flexible subscription options allow you to pick a selection of charts which suits you. The system has intelligent zooming, which has a pretty sensible go at picking the right map for the zoom level when you’ve more than one installed. You can even go right down to Ordnance Survey maps with all the detail you’d expect, while keeping the airspace overlay. These have proved popular with the emergency services, but for the GA pilot are handy for all those occasions a passenger wonders what that interesting looking earthwork or castle or stately home is!

Similarly, the online search function allows you to put in more or less any landmark or location, and the software will go and scour the web for co-ordinates. Great for, “Can we go and look at…?” A full postcode database also works offline. A few small strips are still missing from the waypoints database, including a few odd examples that do appear on the CAA charts.

A new and likely to be extremely popular feature is the inclusion of Google maps imagery (at any rate, when you’re online) and terrain overlays is invaluable when planning to visit an unfamiliar airfield. The sliding around and zooming of the maps, overlays and track data does sometimes look a bit odd if you’ve multiple items switched on, since they render at slightly different speeds, with Google maps being the sluggard. But it does all catch up with itself promptly when you let go!

Vector airfield and taxiway diagrams are now standard and fully integrated with all subscriptions, and appear at appropriate zoom levels, with the option to automatically zoom once at taxying speed. They don’t contain as much detail as, for example, the georeferenced Pooleys in terms of taxiway labelling, but give a good, clear overview. Other overlays also can be added, including fuel prices and even documents you add yourself, such as fly-in instructions or noise abatement rules. This documents space can also be used for things like briefings and photographs, or scanned-in checklists.

A new, optional feature, with the potential to reduce time spent gazing at the device are the ‘HAT boxes’, which float next to your trackline and contain key information about the leg: Heading, Altitude, Time… as well as distance and a fuel estimate. These can be altered in size and opacity and I was instantly tempted to make them as big as possible for easy quick reference.

As well as the new features, there have been a number of tweaks and general performance improvements. The map scrolling speed and scratchpad are both smoother and the in-flight data blocks have a few additional information options to toggle through. Multiple aircraft profiles are now supported and integrated with flight-plan filing via RocketRoute.

Weather and notam info remains easy to use and detailed with overlays of 15-minute rainfall radar and winds aloft as well as airfield TAF and Metar. A new feature for the notam brief is the ability to permanently hide notam that aren’t going to ever affect you, cutting down on clutter.

Overall, it’s a well-thought-out upgrade with genuinely useful additions and the basic subscription is extremely good value for money. There’s a trial version available, so you can try before you buy. – Leia Fee

Become a treehugger with SkyDemon