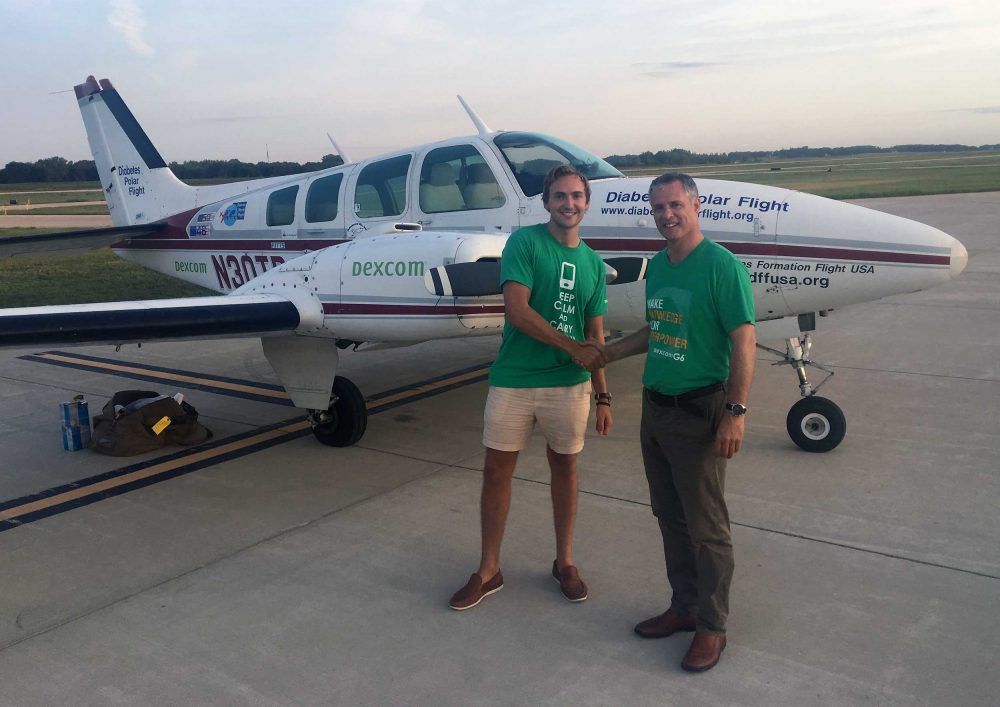 Two pilots with type 1 diabetes, Douglas Cairns and Torborn Dahl, have smashed the world record to visit as many USA states as possible in 24 hours, extending the number from 23 to 29 states.

Cairns, 55, from Fort William in Scotland, and Dahl, 24, from Norway, departed Sanford (Maine) at 0749 Eastern Daylight Time on 27 July in a twin-engine Beech Baron.

They zig-zagged their way down the US east coast as far as South Carolina, then westwards to Arkansas before heading north to Ohio and across Lake Michigan to finish at Albert Lea (Minnesota), just after 0600 Central Daylight Time, USA on 28 July.

Storms over the mountains of the Virginias and South Carolina resulted in detours and forced the pilots to expedite their departure from Pennsylvania as a storm moved in towards the airfield.  This was followed by eight hours of night flying from Alabama to Iowa, with a full moon shining over the entire night-time route.

Total airborne time was 15.6 hours, with the remaining time spent taxying and stepping out of the twin-engine aircraft at each airfield for photos. The pilots refuelled at three stops.

At present, only eight countries around the world enable pilots with insulin-treated diabetes to fly.

Cairns and Dahl, both grounded military pilots due to type 1 diabetes – Cairns from the RAF and Dahl from Norwegian Air Force – believe that more countries need to update their regulations to allow pilots with insulin-treated diabetes to fly, which is why the 24 hour record flight was made.

“We want to show everybody what can be done,” Dahl said. “We hope the fact that we can accomplish this task – with diabetes being the least of our concerns – will light a spark and a hope with other people, as well as convincing regulatory units that it is time for a change.”

“We want to show people what we can do when it comes to piloting with diabetes,” Cairns said. “Diabetes need not limit the scope of peoples’ dreams and ambitions.”

Details of the journey can be found on Cairns’ and Dahl’s Facebook page.