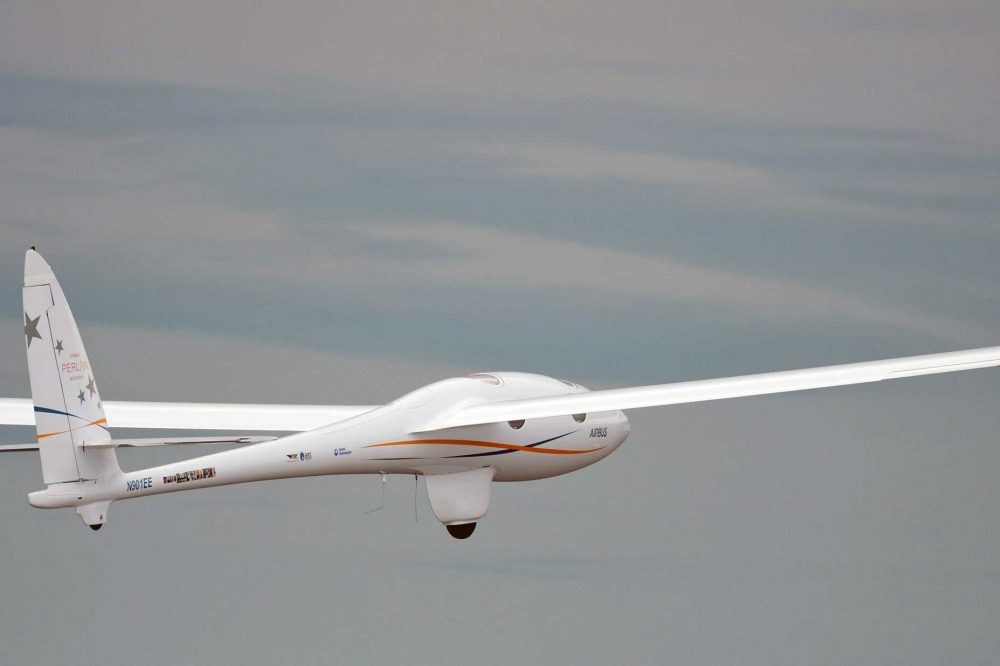 54,000 feet in a glider! A new record! That’s what the Airbus-supported Perlan glider team of volunteers currently based in Argentina achieved at the weekend. And a team effort it was, with persistent, imaginative flying from the two pilots on board and key information being fed to them by the ground crew.

Fromt the way the team tells it, it seemed an unlikely outcome when they launched with a mediocre forecast for gliding conditions… but they persevered.

“We pushed the Perlan 2 out of hangar into -4º C air with our Clouddancer covers on due to the cold,” said the team’s blog.

“The sun was barely up and the sky did not show much sign of promise of wave. Michael was standing by for any needed help with radio translations. Stewart, Lars, Tim, Daniel, Loris, Linda, Tago and Jackie got Jim and Morgan belted in, and test pressurization on the ramp.

“Jim and Morgan launched behind Cholo in the the towplane at just after 9am. The surface winds were barely from the east. We prefer brisk winds from the west; were we really launching a wave mission?

“Cholo towed them to a hotspot near Cero Buenos Aires. Perlan 2 climbed slowly through 18,000 feet and connected with mid-level wave. All systems were in the green on the life support systems display so they kept on flying.

“At 28,000 feet they had enough altitude to penetrate upwind through sink to the stronger lift of the primary wave off the Andes. That cost 7,000 feet of altitude, but it was an investment towards the forecast stronger lift.”

“CapComm with Ed, Tim, Al, Lars and Loris scoured the weather forecasts to find a stairstep path that would enable them to climb higher. We kept looking at the sky wondering where were the wave clouds?

“Jim and Morgan slowly climbed to 33,000 feet. That altitude was used to go south towards the border where they were in contact with Chilean air traffic control. They had to stay above 38,000 feet for 40 minutes due to jet traffic headed to Antartica.

“They performed a flutter vibration test at 35,000 feet and 40,000 feet. Each time there were no anomolies so Perlan 2 was cleared for another 5,000 feet. Then it was time to turn downwind to see if they could find the now stronger secondary wave. As they slowly climbed they knew they had punched through the tropopause when it stopped getting colder and lift again increased. Coldest temp was -68º C or -90º F.

“The battery was working hard keeping critcal items like the oxygen regulator and 20 toes warm. The Virtual Cockpit shows the moving map and several telemetry items like battery, oxygen, and air remaining.

“As Jim climbed through 42,200 feet Einar sent a message of congratulations which we relayed to Jim on the radio. That had been Jim’s previous highest point back in 1986. (Can you believe Einar remembered? What a gentleman.) They performed another flutter vibration test at 45,000 feet.

“As they clawed their way above 47,000 feet, Jim said he finally realized they might actually top the old record of 50,722 feet. Due to new rules the target GPS altitude was 51,214 feet. But with the balloon data Jim knew he would need almost 2,000 more feet due to the difference in pressure altitude compared to GPS altitude.

“The excitement was building as the record altitude became nearer. Morgan took some photos out the window to the east and of the rear instrument panel. Jim keyed the radio with a countdown: “10 meters, 6 meters, 2 meters, SCORE!”

“They topped out at 54,000 feet on the cockpit instruments and Morgan flew while Jim took some photos from the top. The front left eyeball is completely frosted over and the right side has frost crystals on upper half. The view out the side window shows the laminar flow to the west and a ragged foehn gap.

“The maximum GPS altitude was 52,172 feet which was about 1,000 feet above the necessary altitude for a new record. Flight #38 was the longest (6.6 hours), coldest, and highest that Perlan 2 has flown.”