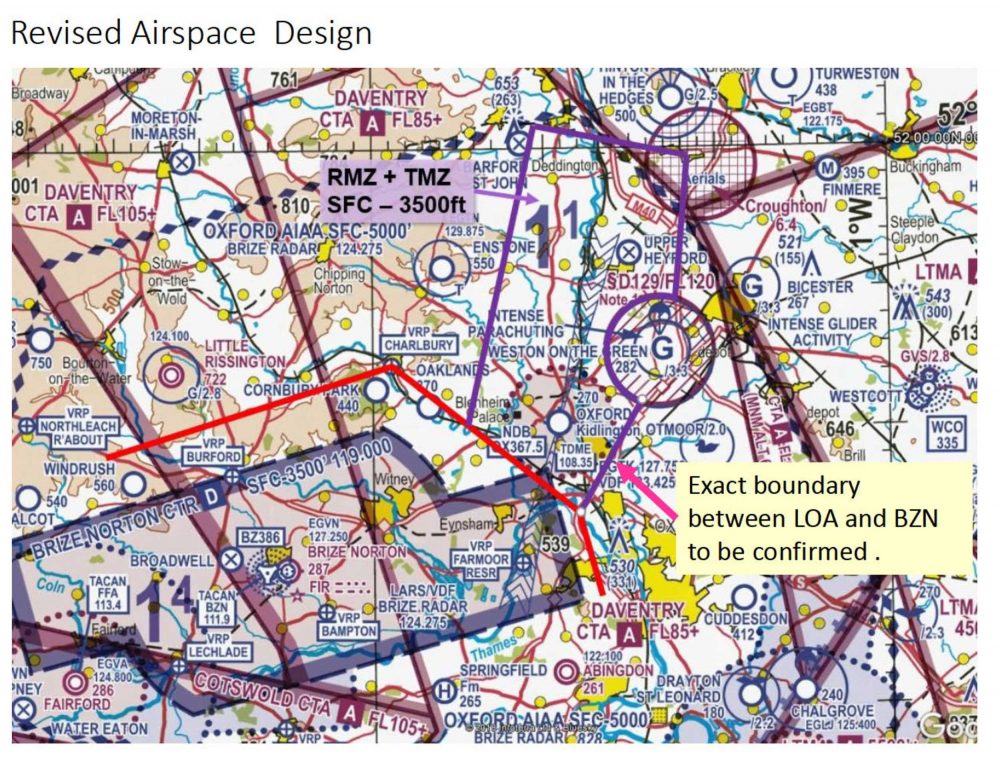 London Oxford Airport has revised its airspace proposal following a public consultation and has cut its ambition from a Class D airspace to a simpler design based on the model in place at Hawarden.

The revised proposal has a Radio and/or Transponder Mandatory Zone to 3,500ft. London Oxford Airport (LOA) gave a presentation on the revised airspace proposal, prior to it being submitted to the CAA, for interested parties including AOPA.

AOPA’s report said LOA had listened to feedback given at the consultation stage where 98% of responses were negative, and that they hoped the revised proposal addressed the majority of objections raised.

For flights within the RMZ/TMZ pilots must comply with ONE of the following:

(b) Display the Oxford Frequency Monitoring Code (with mode C, if available), whilst monitoring Oxford Radar prior to entering and within the RMZ.

(c) Non-radio aircraft should contact Oxford ATC prior to commencing any planned flights that will enter or cross the RMZ for authority to enter the RMZ.

(d) Conduct flight in accordance with valid Letter of Agreement with Oxford ATC if operating from a site within the RMZ.

LOA was asked to re-consider the northern boundary of the RMZ/TMZ as this is likely to cause increased traffic around Hinton in the Hedges and Turweston with pilots avoiding the RMZ/TMZ.

Kerry Wood of Osprey Consulting Services which helped compile the proposal, said, “Whilst we accept that some of the General Aviation community will still have reservations about certain aspects of our proposal, we hope that there is an appreciation that we take your concerns seriously and have sought to mitigate as many as possible with our modifications.

“We all appreciated the healthy discussion concerning our design modifications following the consultation feedback and will reflect on some of the feedback received during the afternoon.”

AOPA’s full report of the presentation is here