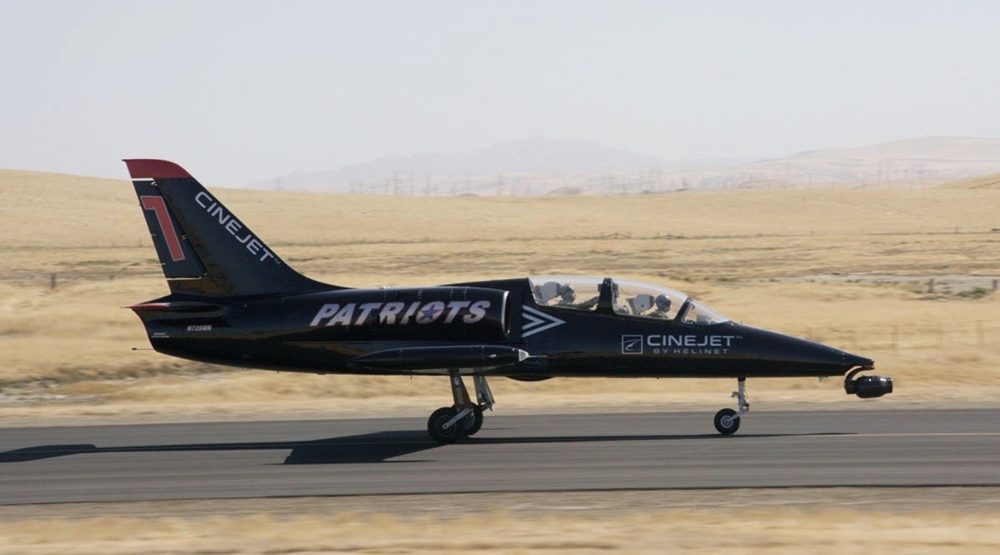 Amidst all the high-end private jets and glamour of the annual National Business Aircraft Association (NBAA) show in Las Vegas this week was the launch of spectacular CineJet for air-to-air video shooting.

CineJet is based on an Aero L-39 Albatros training jet, fitted with a state-of-the-art six-axis gyro-stabilised Shotover F1 camera system suspended from the nose of the aircraft. It can shoot air-to-air photography at speeds over 350kt and in manoevres up to 3G.

The cameraship has been developed by Helinet Aviation, specialists in aerial photography for the movie industry, working with the Patriots Jet Team.

“We’re raising the bar in terms of what productions can capture from aerial cinematography,” said Helinet CEO Kathryn Purwin.

The aircraft will be flown by Helinet’s VP of Aerial Film Production, Kevin LaRosa II and Patriots Jet Team Founder, Randy Howell. For over 16 years Kevin has served the film industry’s top productions as a stunt pilot and aerial coordinator, and is a member of SAG and the Motion Picture Pilots Association.

Randy has accumulated more than 23,000 hours of flight time and has over 30 years of flying experience with United Airlines. He has been an advanced instructor in aerobatics, formation, UPRT as well as a Check Airman and Simulator Instructor in a multitude of aircraft.