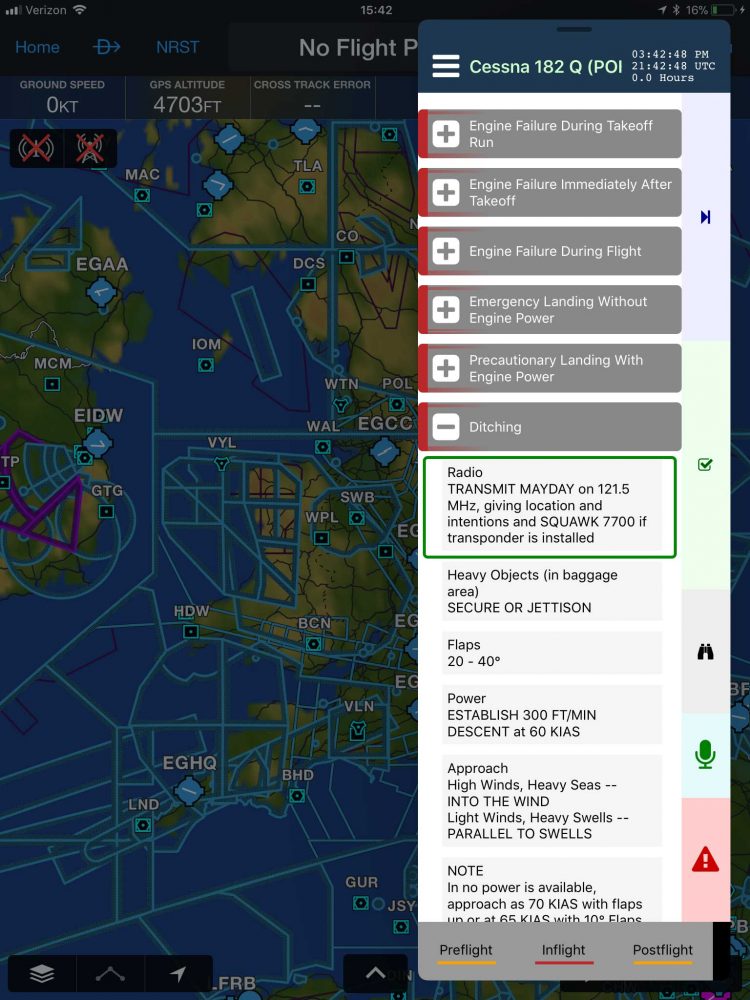 Short of hiring a real-life co-pilot, this app is about as close as you’ll come to having one, only in tablet form.

There’s little doubt that the consistent use of checklists makes our flying safer, but in single-pilot cockpits, many still struggle with them.

First, a bit of checklist philosophy. Some believe in a checklist which contains enough detailed information to use it as a how-to-fly document, while others use the same old, simple mnemonics.

Often, it seems that longer checklists are written by a legal team and aimed at someone who’s never been trained on the aircraft. That type of checklist is okay if used by a patient person, but often the pilot loses interest on item #43 and starts drifting off into a state of rote-reading, and murmuring ‘check’.

Worse still are the electronic checklists available on many modern aeroplanes, where the pilot is forced to use an EFIS as glorified paper. Again, the checklist is usually too long or pointlessly detailed, along the lines of ‘Breath, inhale. Hold, exhale. Note: failure to exhale may result in death.’

Consequently, once again, the pilot loses interest and ends up clicking through the items with little thought. The next time you’ve the opportunity to watch another pilot use a checklist, written or electronic, see if they’re really paying attention to the items or just going through the motions.

Anyway, enough philosophy, back to MiraCheck’s app. The way airlines avoid the problem outlined above is that it’s one crew member’s role to read the checklist and listen for the appropriate response from their colleague.

Also, airlines generally have simple checklists which start with the assumption that the pilot does actually know how to operate and fly the machine, and so just needs to ensure the essential bits are all sorted before each phase of flight. This means that the P1 uses very little of their mental capacity on the checklist, when simply listening to a question, looking at the system and answering with the system state.

You might have guessed that I’ve strong feelings about checklists, and you’d be right. They’re born from a frustration with checklists which take my focus away from operating the aircraft. 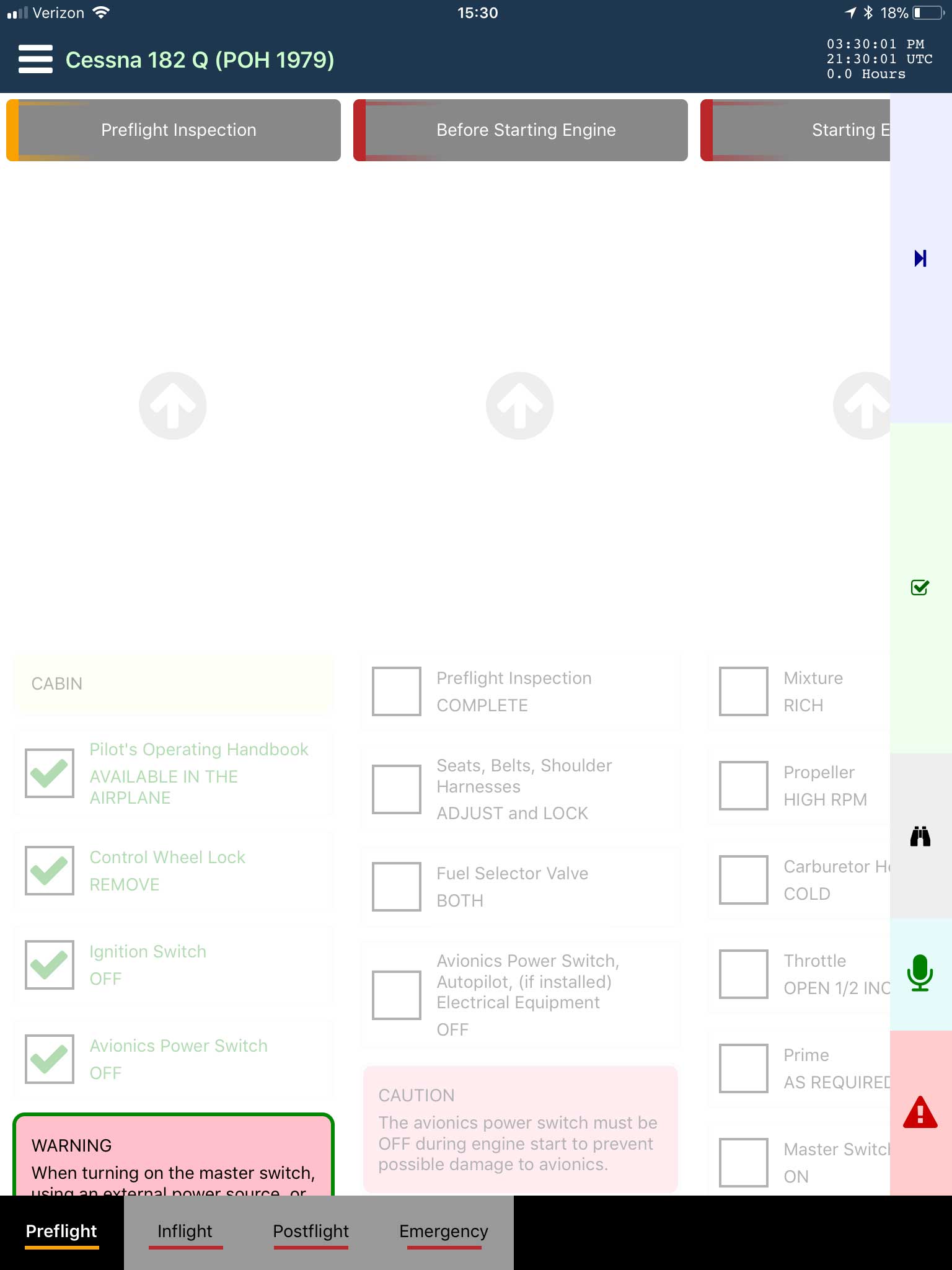 Talking and listening
What we need is an electronic co-pilot which will talk and listen to us, and MiraCheck CoPilot ticks those boxes. It’s a tablet app which, at its most basic level, allows checklists to be created, in a familiar phase of flight format, and then managed. From there, the pilot can check or skip items by clicking on the screen, which is pretty standard stuff for checklist apps.

However, if the tablet is connected to the pilot’s headsets, this app takes it a step further by offering the option to have it read the checklist items out and then listen for a ‘check’ or ‘skip’ command. An advanced sub-feature even allows the pilot to forego the ‘check’ and reply with a defined state.

For instance, on the Before Landing Checklist, on the Landing-Gear item you might set the app to listen for “Down, 3 Green”, the idea being that, just as with a real co-pilot, the principle is to generate a considered response after checking the state of the system, not simply rattle off ‘check’ twenty times  in a row. Your thirty-year-old headsets aren’t going to work with that option – you’ll need something more modern, with a Bluetooth or wired audio interface to your tablet. 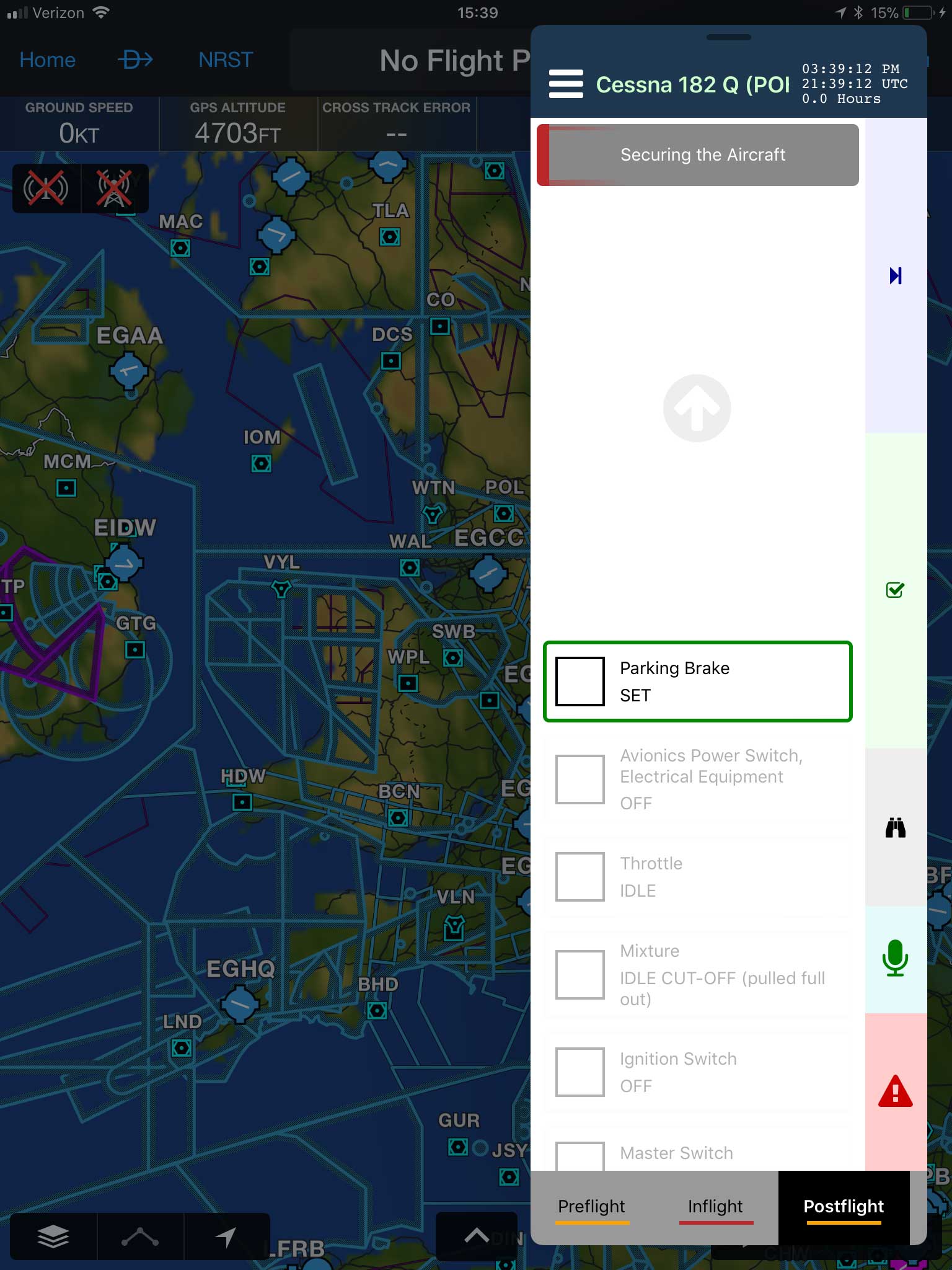 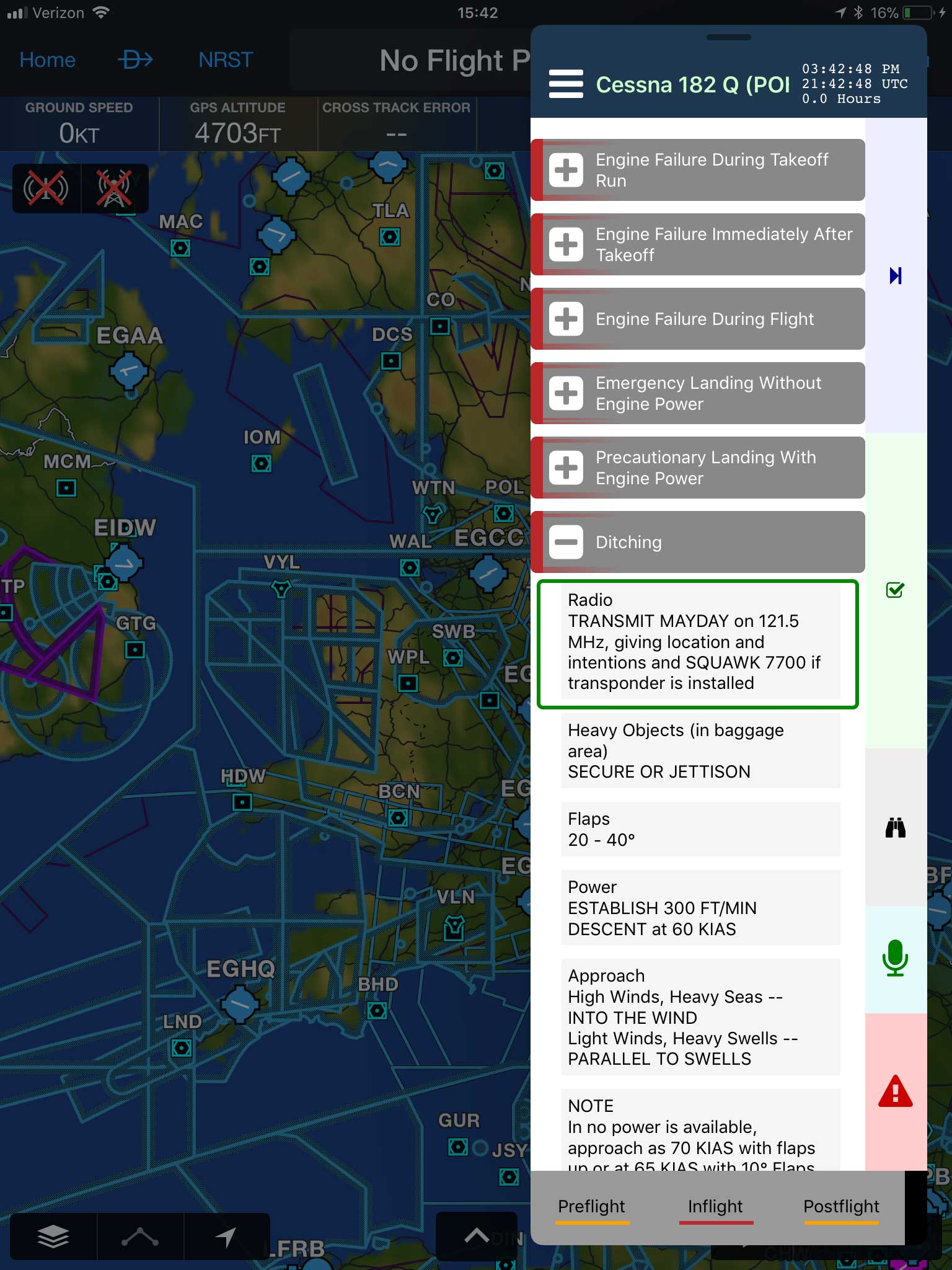 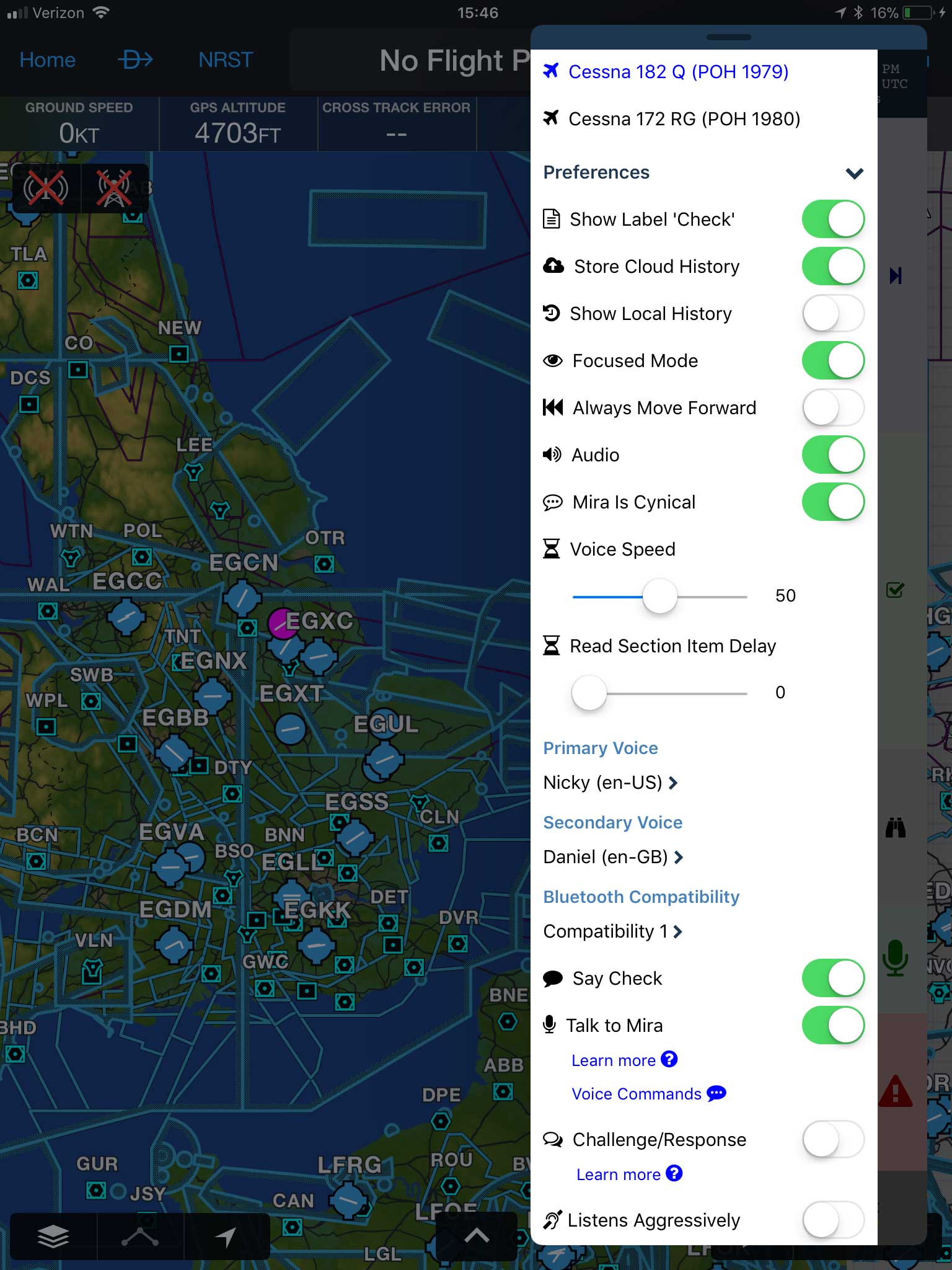 Today, most iOS devices support multi-tasking, which allows CoPilot to run concurrently with other apps. When it comes time to run a checklist, you simply swipe CoPilot into the foreground, and it can run as small window on top of your primary app.

The newest version of CoPilot also sports a scratch pad, allowing clearances and notes to be jotted down with a finger, although personally my already semi-legible handwriting becomes completely incomprehensible working this way. Additionally, notes or photos can be added as a response to an item, such as fuel state or Hobbs time.

Instead of having to manage checklists on a tablet, a CoPilot web portal allow you to create and edit content using a PC, and then cloud-sync it back to your mobile device. There’s a library of crowd-sourced and commercially-produced checklists to choose from, and of course you can enter your own from scratch.

Short of hiring a real-life co-pilot, this app is about as close as you’ll come to having one, only in tablet form. However, getting started isn’t effortless – it takes some commitment to learn the software, set up the checklists for your aircraft and sort the various links between tablet and headsets.

The basic software and functionality is free, but the subscription that allows you to unlock the features which set CoPilot apart from nearly every other checklist app costs $4.99 per month – yearly and lifetime plans are available. – Joe Fournier