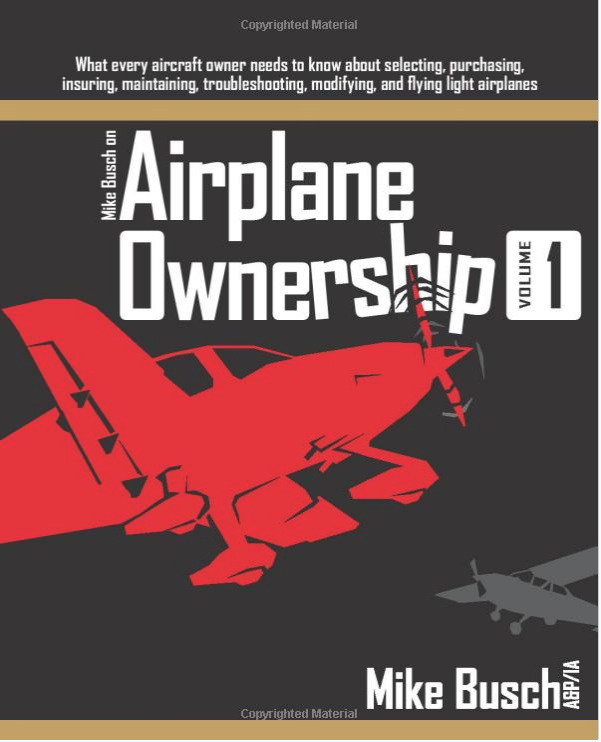 I remember hearing about a question asked by a hugely keen but non-aeroplane-owning pilot. Said pilot asked how much it would cost to get into aeroplane ownership, to which the reply was along the lines of ‘everything you’ve got’.

Clearly, or at least hopefully, it’s an apocryphal tale, and while not literally true (at least most of the time), I can well remember the early days of my aeroplane owner apprenticeship, which were characterised by frequent bouts of frustration, delay and wallet emptying. Even with the application of rose-tinted flying goggles, had I not learned some thorough lessons – and perhaps more importantly listened to some good advice, I very much doubt that I would still be in the aeroplane-owning game.

Mike Busch is an A&P (Airframe and Powerplant) mechanic with an IA (Inspection Authorisation) and has owned, for as long as most people can remember, a Cessna 310. Over the years he’s probably written thousands of articles in US magazines on the business of maintaining an aircraft. A few years ago he started a company called Savvy Maintenance that advises owners and can act as a knowledgeable liaison service between owner and maintenance companies. His books Mike Busch on Engines and Maintenance, and Manifesto: A Revolutionary Approach to General Aviation Maintenance are very well respected, and they’ve now been joined by volume one of a two-parter, Mike Busch on Airplane Ownership.

This book’s a thumper of a volume with more than 400 pages and 49 chapters (wouldn’t you have somehow got to 50?), and it’s packed full of information about, well yes, owning an aeroplane.

The book leads you through the process of selecting the right aeroplane for you, including a section on why a twin-engine piston aircraft is probably not the right answer: ‘It is not far from the truth to say that the principal role of a light twin’s second engine is to overcome its own drag and to carry its own weight and the weight of the additional fuel it requires… sigh!’

How to get a pre-buy inspection done follows, then insurance and owner responsibilities before getting into the meat of the book, which unsurprisingly is largely about managing the maintenance of your aircraft, choosing your mechanic/engineer (get this bit wrong and you’ll be poor, disenchanted and miserable – get it right and you’ll just be poor).

Dealing with maintenance issues away from home and practical advice on creating your own ‘survival toolkit’ (that’s aeroplane survival, not the fish hook, fire lighting and storing water in condoms kind of thing).

The book’s style is friendly and approachable, there are hundreds of real life examples (lots of name changes and much use of the word ‘sigh’) that experienced owners will be able to relate to, and that new owners will hopefully be able to avoid, at least in part.

Unfortunately, for European readers who own or aspire to own an EASA registered aircraft, Mike’s an FAA A&P and IA, so quite a lot of the legal details will only really apply to N reg aircraft. Even though EASA and FAA maintenance regimes are slowly coming together, the systems are nowhere near close enough for much of the information to be practical.

That said, aeroplanes don’t know which registration letter is painted on the side. Buyers, wherever they’re from, will have the same human failings (…this old aircraft on eBay looks like a real bargain). And apprentice aircraft owners will encounter many of the same challenges along the way (except the EASA regs will be more difficult to understand).

Would my own experience have been different had I read this book 25 years before it was written or published? Undoubtedly. Buy the book, it’s a great investment.