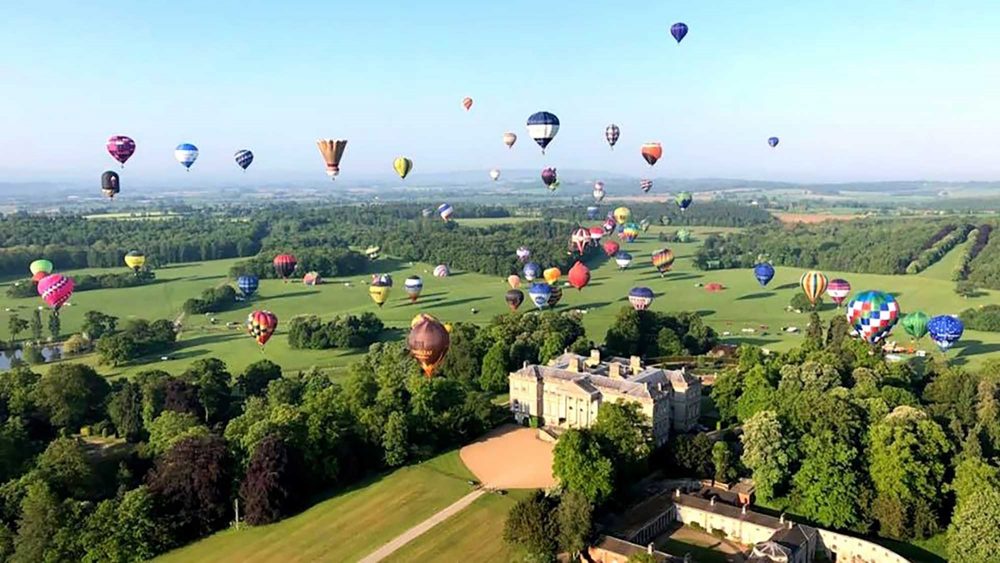 The Midlands Air Festival will return next year to its original location of Ragley Hall in Warwickshire on 4 – 6 June 2021.

After a year of postponed events across the country due to the Covid-19 pandemic, the organisers of the annual event continue to move forward with their plans for the 2021 festival with Covid-secure procedures in place, should they be required.

The ticketed event will feature the largest display of special shape character hot air balloons in Europe, with over 40 of these amazing giants registered to attend. In addition, organisers have already secured the mighty B-17 bomber to headline the exhilarating programme of air displays.

Mark Lockwood, spokesperson for the Midlands Air Festival, commented: “The global Covid-19 pandemic has devastated the events and entertainment industry over the last eight months and we are delighted to be able to announce the return of the Midlands Air Festival next year to give families, aviation enthusiasts, and balloon lovers alike, a positive, aspirational and visually spectacular event to look forward to in 2021.

The stunning Ragley Hall estate offers thousands of acres to enable us to host an amazing air festival for locals, national and international visitors alike, whilst still allowing ample space for sufficient social distancing and a relaxing experience. Over the coming months we will be finalising our spectacular air display programme and we look forward to sharing that with everyone in the very near future.”

Demand to open ticket sales has been growing, with many people wishing to give tickets as Christmas presents, so organisers are releasing a special offer for ticket buyers who purchase before Christmas. Every ticket holder will benefit from reduced ticket prices and a free premium parking ticket will be included with their purchase, allowing visitors to park closer to the showground.

With over 100 hot air balloons in attendance and such an extraordinary number of special shape balloons, the twice-daily hot air balloon mass ascents at dawn and dusk will provide an unrivalled spectacle. Some of the special shape balloons include The Orient Express making its debut appearance at the festival all the way from The Netherlands, thanks to the Team for Old Balloons; The Head, a massive flying piece of art designed by Swedish artist, Peter Hellbom; Hyla the Frog, a character-balloon based on a tree frog and the Guinea Pig, a new addition also making its debut appearance across the Midlands skies. Further details of the balloons in attendance will be announced over the coming weeks.

During the afternoon of Saturday 5 and Sunday 6 June, the flying display programme will keep visitors’ eyes to the skies. The audience will be treated to WW2 Warbirds, WW1 air displays, fast jets, helicopters, gyroplanes, high energy aerobatic displays, aerial ballet and flying circus acts as well as parachute and formation display teams, all contained within beautiful surroundings of the Ragley Estate.

The first air display item to be announced is the B17 ‘Sally B’, a large American four engine bomber, which will be flying on both Saturday 5 June and Sunday 6 June. The B17 formed the backbone of the allies daylight bombing operations over Germany during WW2. With 4 Wright Cyclone 18200 radial engines, ‘Sally B’ is sure to be a crowd pleaser as it roars through the skies.  Sally B, is a film star in her own right, appearing in numerous TV series and she played a starring role in the David Puttnam WW2 blockbuster, Memphis Belle.

The Midlands Air Festival will also be bringing back its spectacular signature Friday evening Nightfire show, with a pre-show evening air display, then when darkness falls an air display of aircraft fitted with pyrotechnics, fireworks and lighting systems to their wings, followed by a beautiful balloon nightglow where the burners of the balloons light up the envelopes in a choreographed dance of fire all set to music.  The finale of show will be a massive firework display to close a truly unforgettable evening.

The 2021 Festival will also have two new features, the first being some of the largest radio controlled aircraft in the world and set piece battles from these amazing models. We will also have a number of large character kites set to fill the sky. The event will feature a programme of ground entertainment, as well as a whole of host of activities, stalls and food markets to suit the whole family.

Since the inaugural event in 2018, the Midlands Air Festival has proved to be hugely popular with both locals and visitors to the area, creating a truly special day out.

Tickets are now available from the Midlands Air Festival website. Tickets for this event must be purchased in advance and are limited to specific numbers per day so those wishing to attend are advised to book soon to avoid disappointment and make the most of the current special offer.

Flying Legends moves to Sywell for 2021