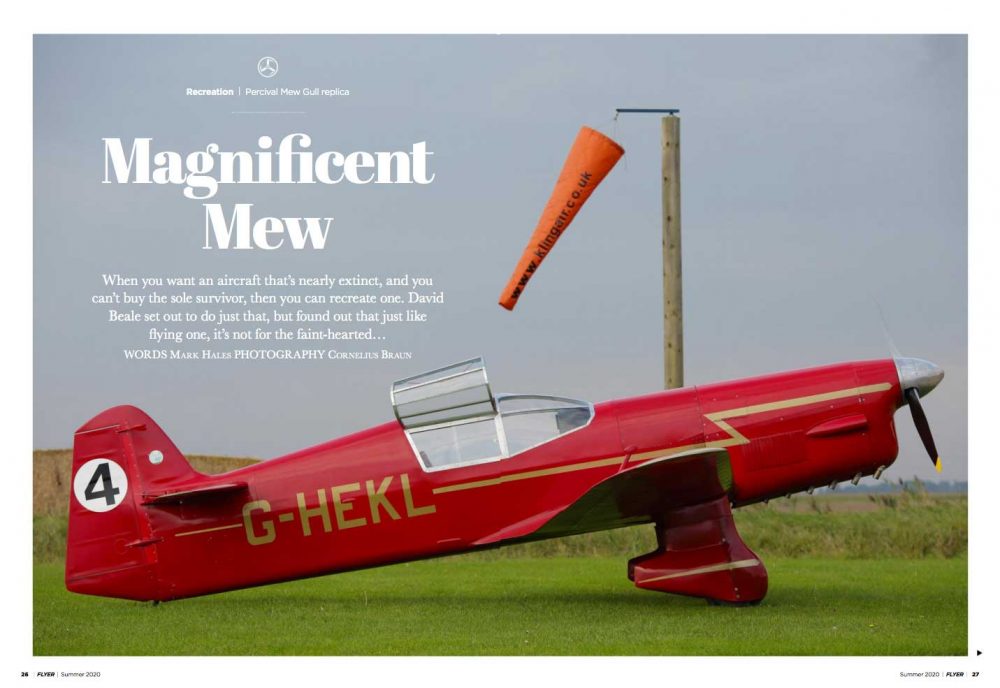 Air racing was a big thing in the 1930s and the Percival Mew Gull was a purpose-built racing aircraft for one person. We’re not talking laps around pylons here but proper, long-distance races. The 1938 King’s Cup race, for instance, was over 1,000 miles.

That race was won by Alex Henshaw, not only a hugely talented pilot but he also knew how to get the most out of his aircraft, a modified Mew Gull. Henshaw became one of the most successful and celebrated racers of the day.

In 1939, just months before WWII broke out, Henshaw set a record flying from London to Cape Town and back – in 39 hours 25 minutes, averaging 209mph.

Very few Mew Gulls were made and even fewer are still in one piece so for pilot David Beale, who really really wanted one, the only answer was to build it himself. Without plans. Some of the aircraft has just been ‘reverse-engineered’, a tough task even for an engineer like David.

In the Summer issue of FLYER,  David Beale tells Mark Hales how building the aircraft was a real challenge… and, so it turns out, is flying it.

‘Turn Back Or Land Ahead?’ For most of us, there’s no question about what to do in the event of an Engine Failure After Take-Off (EFATO). Land ahead, that’s what we’re taught. But David Joyce decided to investigate further…

82 peaks in the Alps would be a good flying adventure in a modern aircraft but in an under-powered classic Piper Cub? Yes, as it turns out.

Garmin’s GI 275 is a round all-purpose electronic instrument that can fit in a standard panel hole. In this month’s Top Gear we look at the installation and how well it works.

All this and much more in the Summer 2020 edition of FLYER.

You can read the digital FLYER full screen for free here

Don’t forget! If you’d like to take advantage of our free landing vouchers – six in every issue – then you’ll need to join The FLYER Club here