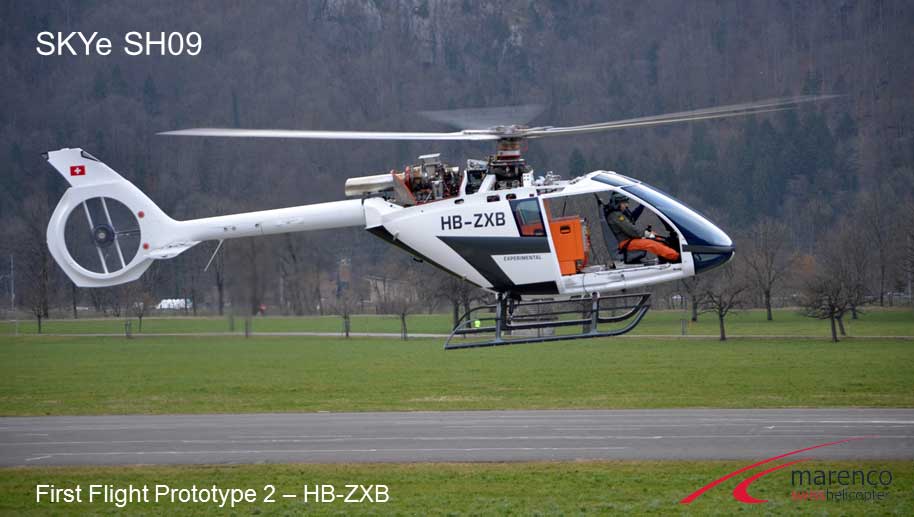 It takes a lot of ambition and money to compete in a technically competitive arena such as helicopter manufacturing but that’s exactly what Marenco Swisshelicopter is doing with its SKYe SH09 helicopter. It has just made the first flight of its second prototype, P2.

Marenco said, “The first flight of P2 was performed with Richard Trueman, Chief Test Pilot, at the controls and Peter Wittwer as Flight Test Engineer. The key event was witnessed and celebrated by the whole team on the Mollis airport facilities of Marenco Swisshelicopter in Switzerland.

“A rewarding moment for the teams, under the lead of CEO Martin Stucki, that have placed intensive efforts since the first flight of Prototype One and the flight test phase performed in 2015.”

Test pilot Richard said, “This first flight of the second prototype of the SKYe SH09 was a total success. All the test objectives were easily achieved and the aircraft performed extremely well. The crisp handling qualities combined with the ergonomic and intuitive cockpit features made the SKYe SH09 a pleasure to operate.”

Marenco is particularly keen to point out the low noise level of the helicopter, which it says is the result of the blades planform, the low tip speed, as well as the shrouded tail rotor, which it calls ‘Maestro’.

The first phase of test flights for P2 is now underway, said the company. Initial trials will be hover flights at low speeds and low altitudes before moving on to hover flights outside the ground effect at moderate speeds. This will be followed by trials confirming systems behaviour and avionics accuracy, flying limited auto-rotations and initial performance and stability trials.

Finally, testing will move on to handling, load survey and exploring the helicopter’s full Height Velocity curves, to confirm the safe combinations of altitude and airspeed during auto-rotational landings.

Marenco is exhibiting at this week’s Heli-Expo which opens tomorrow, Tuesday 1 March, in Kentucky, USA.