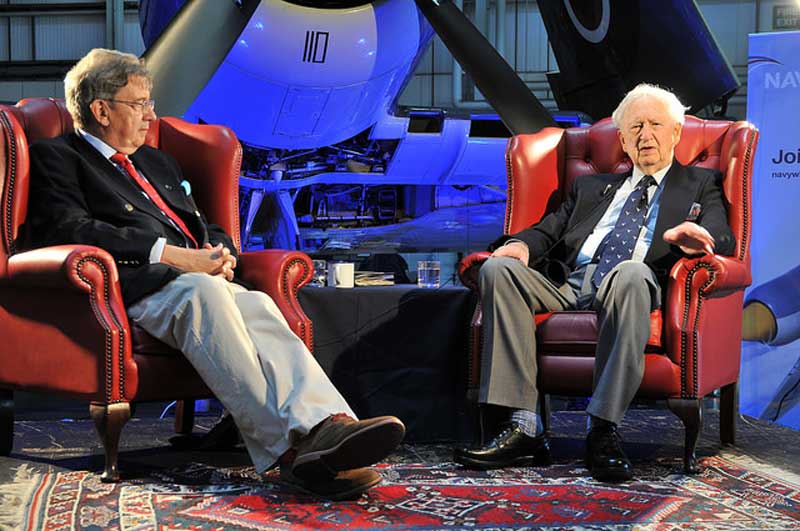 A Korean War veteran and former Hawker Sea Fury pilot will be the special guest at the Museum of Army Flying’s latest talk on Thursday, 25 January.

Brian (Schmoo) Ellis will be joining broadcaster and journalist Paul Beaver on stage to talk about his story of daring, professionalism and a dog fight against the odds. Photo above shows Paul, left, with Schmoo last September.

For it, Paul interviewed veterans of aircraft carrier aviation from the 1930s to the 1970s, amongst them, many from the Korean War.

Paul says that he discovered that the accepted view of a famous engagement between British naval propeller-driven fighters and Russian jets over Pyongyang in North Korea was wrong. He spoke to all the participants and realised that the youngest member of the flight of four, Brian (Schmoo) Ellis, may well have been the victor.

Paul said: “When I discovered that Schmoo Ellis was still alive and very much in fine form, I went to see him in March last year. He had a distinguished career in the Fleet Air Arm and the Civil Aviation Authority.

“I discovered that Schmoo was prepared to talk about his time in Korea. It is such a good story that I feel it should be shared with a new generation as Korea is back in the news.

“I am delighted that the Museum of Army Flying has given me the opportunity.”

Tickets for the talk, which starts at 7pm, cost £10 and include a welcome glass of wine or soft drink on arrival. There is also a curry supper available from the Apache Café from 6pm for £7.50.

For more information, and to purchase tickets, visit www.armyflying.com/events or call 01264 784421.