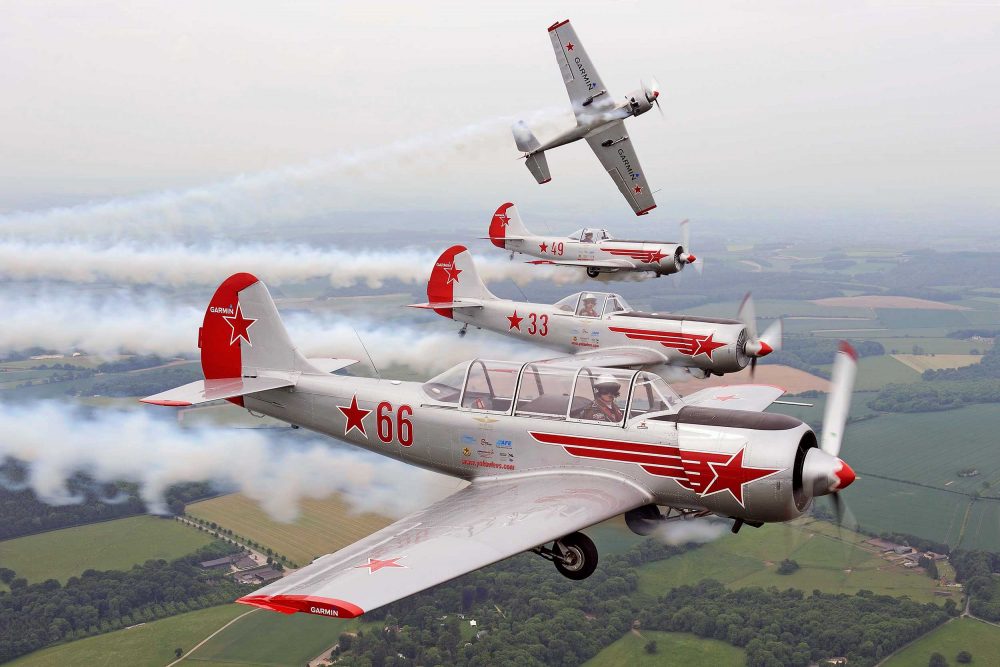 Air display teams are being offered a scheme to offset the carbon emissions of their aircraft, covering both the avgas burnt and the smoke oil used during the display.

The CO2 offset scheme has been launched by Airborne Services, based at Henstridge Airfield, which also operates The Yakovlevs display team.

Jez Hopkinson rusn the company and is the display team leader. Jez explaioned the scheme.

“We supply smoke oil to a number of the major UK teams and we have now concluded a deal with our smoke oil supplier that affords us the opportunity to supply this smoke oil already CO2 offset.

“Further, our scheme also includes (at no extra cost) offset for the avgas that our customers will be burning whilst using the smoke oil, making their air displays fully CO2 offset.”

One well-known team already running the scheme is The Blades which has  a carbon footprint of approximately 103.5kg per aircraft per display, based on 20 litres of smoke oil and 25 litres of avgas.

A purchase of 1,000 litres of smoke oil is sufficient for 50 singleton air displays for The Blades (or 12.5 four-ship displays) and represents an offset of 5.175 metric tonnes of CO2.

“The current cost of CO2 offset schemes varies considerably, starting from as little as £3.00 per tonne. We have chosen a median value of £10.00 per tonne and so in the case of The Blades they are effectively offsetting 6 tonnes whilst creating 5.175 tonnes of CO2.

“The CO2 offset fund is kept in escrow until the end of the year when it is used to purchase carbon credits. The carbon credits purchased will be from ‘Gold Standard’ or UN-endorsed ‘Clean Development Mechanism’ environmental projects.

“Ultimately we have ambitions to expand to more quantifiable CO2 projects such as the emergent Direct Air Carbon Capture industry (which we believe provides the only real-world, quantifiable CO2 offset figures, as tree planting, while certainly environmentally sound, has a less quantifiable nature to it), as well as UK GA-specific environmental R&D projects.

“We are currently in discussion with the Department for Transport about expanding this initiative to the wider UK GA fleet.”