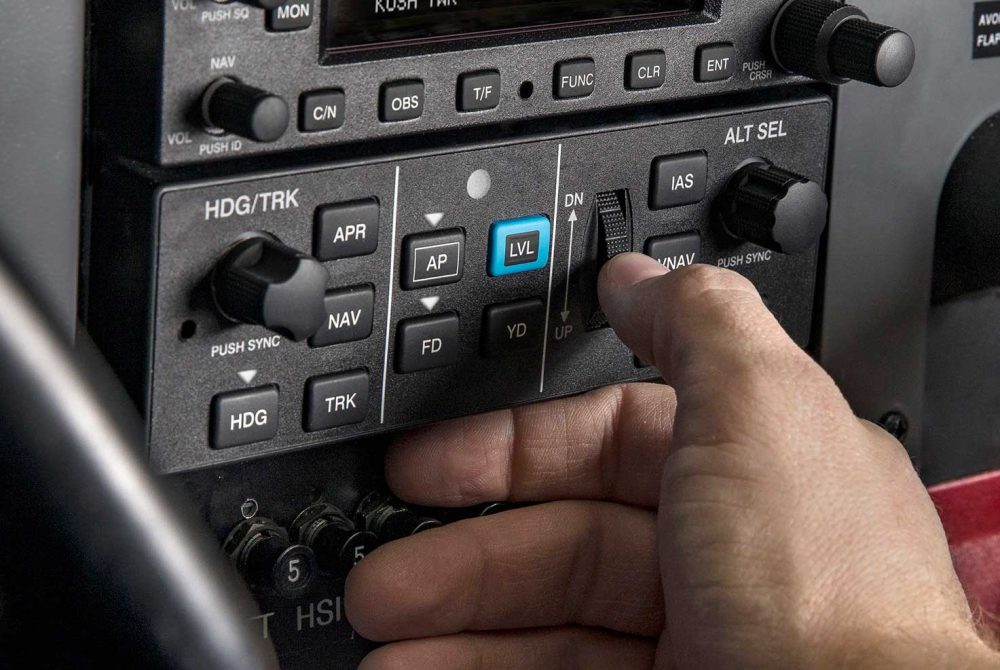 If you want an autopilot, and if the GFC 500 is approved for your aircraft, you can currently do no better.

A few years ago I was stupid enough to go to one of those business networking breakfasts. Over stale croissants, and between pitches from executive life coaches and photocopier salesmen, a ‘success consultant’ delivered a series of clichés to her captive audience.

When she said, “The only thing constant in life is change,” I remember thinking that she’d clearly not spent her career in the world of certified General Aviation autopilots where, seemingly for decades, nothing really happened.

S-TEC with its huge number of long-held approvals was the only real game in town, and any competition faced certification requirements that mimicked the utility of a heavy duty condom – keeping pilots safe from nasty rashes, while efficiently preventing the spawning of new generations.

Although we didn’t know it at the time, in June 2004 things slowly started to change with the introduction of Garmin’s G1000 integrated avionics.

Initial installs were coupled (I use that term loosely) with Bendix King’s KAP140, but two years later Garmin announced the GFC 700, a digital autopilot that was fully integrated, and its performance outshone anything that GA had previously seen.

Sadly there were no retrofit options, so the only way you could get your hands on one was to buy a new aircraft, meaning that S-TEC’s product line was (still) pretty much your only choice.

In early 2013 Garmin launched its G3X autopilot into the experimental/homebuilt market. It could be bought and fitted for pennies (albeit special, more expensive, aviation pennies), where it provided owners with a great modern autopilot. It also delivered an outstanding example of the ‘get less, pay more’ phenomenon that we certified owners enjoy – or should that be endure?

That all changed at Oshkosh in 2017 when Garmin announced the launch of the GFC 500, a digital autopilot for the retrofit certified market based on the G3X autopilot. The certified version costs more than the non-certified, but in the world of certified autopilots, we’re still talking aviation pennies.

FAA certification was granted in January 2018 with an STC for the Cessna 182Q (and F182Q), and EASA certification was announced at AERO this year, along with STCs for another nine models with more in the pipeline (Garmin keeps an updated page here: bit.ly/gfcstclist).

In its simplest form the autopilot has four components, a G5 Electronic Flight Instrument and a GMC 507 control head which together provide the brains, and a couple of servos to provide the brawn.

This bare-bones system will work fine as a very basic autopilot, but to get the most from your investment you’ll want to add a bit more, and I would personally suggest at least a GNS430 or 530, but preferably a GTN750 or 650 as you’ll then be able to take advantage of its vertical navigation (VNAV) capability.

This review is based on FLYER’s C182, which has just had the GFC 500 installed. During the planning, I figured that as we were into a major opening up of the aircraft, it made sense to spec anything we might want in the future right from the start (others call that mission creep).

So this particular install has two G5s (one acts as an AI/Electronic Flight Instrument and the other, an HSI). In addition to the pitch and roll servos I added electric trim (another servo). The autopilot is interfaced with a GTN750, enabling vertical navigation, and a go-around button means that it is capable of flying not only coupled approaches, but coupled missed approaches, too.

The system itself has the capacity for a yaw damper. That’s not currently approved on the Cessnas, but maybe one day…

So far, I’ve flown about a dozen hours since completion, so while I’m definitely still learning, I’m starting to get a good idea of the system’s capabilities. I’ll break the features into three areas, the first two will hopefully have nothing to do with day-to-day flying, and are all about safety.

The first is straightforward. In the middle of the autopilot controller is a big blue button marked LVL, if you lose control of the aeroplane, or become disorientated, just press this button (it’s always active) and it’ll return you to straight and level.

I’ve spent some time experimenting with unusual attitude recovery, and so far the return to level flight has been swift and accurate on every occasion. I hope never to need it, but if I do it’ll hopefully buy me some time and mental capacity.

The second safety feature is less obvious. Garmin call it ESP (Electronic Stability and Protection) and unless you make a point of turning it off, it is always on, silently monitoring speed and bank angle.

The idea is that if you exceed 45° of bank that the autopilot’s servos will kick in and nudge you back towards something less steep, the steeper the turn the more effort they’ll put in.

If you approach Vne they’ll nudge the nose upwards and if you get too slow they’ll lower the nose to keep you from slowing up too much.

Naysayers hold fire, I’ll get to your objections in a sentence or two. First an important caveat. Underspeed protection is switched off below 200ft, and to do that it needs to know where you are, so the underspeed protection is only available if you have the GFC 500 working in conjunction with a GTN, or a WAAS GNS, either of which must have a terrain database installed.

Right, for those of you thinking ‘but I don’t want some invisible nanny looking over my shoulder and nudging me when I know what I’m doing’, firstly, in normal flight you’re not even aware that it’s there and doing its thing.

Secondly we ALL get distracted and overloaded, and I suggest we should be happy with someone or something giving us a timely nudge if required and thirdly, if you want to fly steep turns, accelerate beyond Vne or practice some 1g stalling you can easily switch ESP off via the G5’s controls.

So how about the autopilot bits of the, er, autopilot? Frankly it’s brilliant. Physically its components are different to the GFC 700, but its capabilities are exactly the same. At its simplest you can get airborne, switch it on and guide yourself around the sky by adjusting heading or ground track. Similarly pressing the ALT button captures whatever altitude you happen to be at, but there’s so much more, particularly when paired with a GTN.

Using NAV rather than heading or track will follow a route as loaded into your GPS, complete with turn anticipation. Basic vertical navigation is easy, all you do is select your desired altitude and then decide whether to engage Indicated Airspeed (IAS) or vertical speed (VS) mode, selecting your desired airspeed or rate of climb/descent with a control wheel.

If you have a GTN, you can also set altitude restrictions along the way, and the autopilot will do the rest. You can create and automatically fly en route or published holds, and of course you can fly coupled approaches and then coupled missed approaches if needed.

The extensive capabilities come at a cost, and to fully exploit them you’ll need to invest in a GTN and some serious training. It’s not that the GFC isn’t intuitive, it’s just when it and the GTN get together they’re capable of some pretty complicated moves, and I’m finding that the more I read the manual and watch videos the more intuitive it becomes!

I wish I could tell you exactly how much a new autopilot will cost, but every install is different. You’ll have to talk to several avionics shops to get an individual quote, but compared to the S-TEC the GFC does a lot more for a lot less.

To conclude, if you want an autopilot, and if the GFC 500 is approved for your aircraft, you can currently do no better.