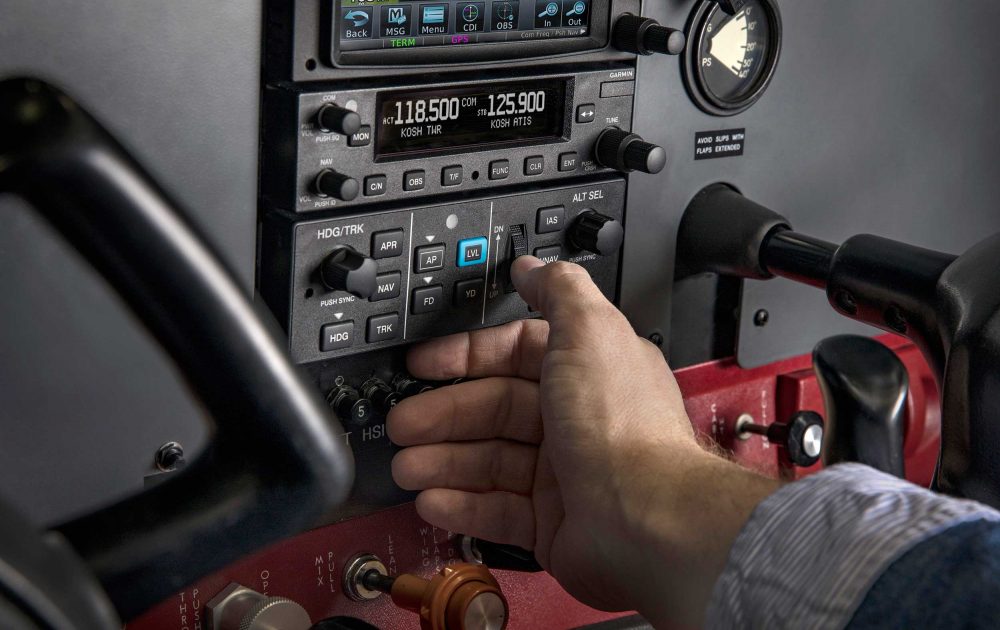 On a value basis, the GFC 500 looks like a winner.

Garmin has announced FAA certification of its GFC 500 autopilot for most Cessna 172 and 182 models, including the Reims-built F172 and F182.

This is significant on many levels, not the least of which is that it marks further progress in the approval of previously non-TSO’d equipment for certified aircraft.

The GFC 500 autopilot and the G5 attitude indicator, which was EASA-approved in 2017, are both non-TSO’d products which Garmin are introducing to the certified market. On the basis that serious safety improvements are being left on the table by the certification process not being more flexible, a path to get the G5 and GFC 500 into our aircraft is now being allowed by the relevant authorities.

In its minimum configuration, the GFC 500 system consists of the Garmin G5 electronic attitude indicator, a mode controller, and servos to actuate the elevators and ailerons. The G5 instrument supplies the sensor data for the autopilot, provides for autopilot mode annunciation, as well as the display of the targets or bugs set by the pilot.

The majority of pilot interaction is through the GMC 507 mode control panel, which is sized to be mounted in a radio stack and provides dedicated heading, altitude and pitch knobs plus buttons for selecting various vertical and lateral modes. The mode controller also has independent attitude sensors to cross-check the sensor data supplied by the G5 so that the autopilot isn’t being driven by a single source.

Even with the GFC 500’s minimum set-up, the result is an impressively functional autopilot/flight director, with pitch hold, vertical speed, indicated airspeed and altitude preselect, and hold for the vertical functions, and roll-hold, ground-track in the lateral modes. A dedicated button engages ‘Level mode’, which offers a single button press to a wings-level, zero vertical speed mode. That can be helpful when the situation is getting out of control and you just want to recover to level flight, to sort out what your next move is.

When the autopilot isn’t flying, the G500’s Enhanced Stability Protection (ESP) features are active and they offer increasingly firm control inputs to nudge the aircraft back toward normal flight, if roll, pitch or airspeed limits are exceeded – this feature can be disabled by the pilot, if it’s desired or is necessary. Additionally, coupled go-arounds are also part of the autopilot’s basic function – transitioning into a wings-level climb while respecting minimum speeds.

With such optional components as a magnetometer, Garmin GPS or second G5 in HSI mode, the autopilot gains heading and navigation, and approach modes.

Electric pitch trim is also an option, which allows the autopilot to trim off control pressures as needed. That can be a useful feature in an autopilot which is capable enough to be engaged through various phases of flight, airspeeds and configurations. As part of the electric trim, the pilot also gains an electric trimmer switch, relieving the massive effort involved in reaching all that way down to the trimmer wheel.

Even in its most basic configuration, the features of the GFC 500 autopilot eclipse those of what were previously considered to the industry’s best offerings. Add in all the options and you have a fully functional autopilot to rival the level of equipment which you might find on a sophisticated turboprop.

Unlike its bigger brother, the GFC 600, which can interface with a wide variety of legacy flight instruments and navigation gear, the GFC 500 requires the G5 flight instrument and either a GTN or GNS GPS/NAV/COM to get the most out of it. The installed cost for the system is highly variable and, as with most complex avionics jobs, labour costs will make up a large part of the total bill.

The list price for the GFC is just shy of $7,000, and if there isn’t already a G5 installed, you’ll need at least one of those, at around $2,200. However, that price point is very competitive when compared to traditional autopilot systems, which offer much less in the way of functionality and performance.

Garmin has said the PA-28 series is due to be approved in 2018, and there are rumours that the 35 series Bonanzas are on the way as well. On a value basis, the GFC 500 looks like a winner. Lets hope it’s EASA approved, before too long. – Joe Fournier