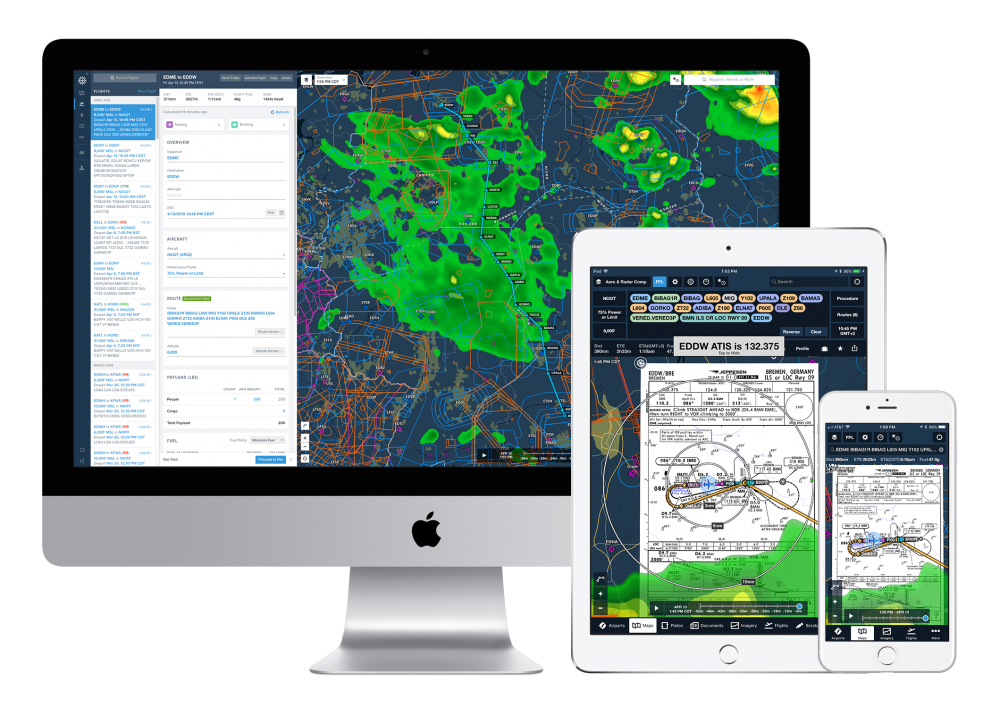 How lucky are we? It isn’t too long ago that planning and self-briefing for a local flight took three-and-a-half weeks, but thanks to some brilliant apps, we can now do it quickly and thoroughly, in minutes, then use the very same apps to navigate during the flight.

So it isn’t surprising that the vast majority of pilots have exchanged their tablets of stone for, well, tablets loaded with one or other of the apps available.

In the UK, the GA market has been dominated by SkyDemon for some time, but this June saw the leading US app, ForeFlight, launched in Europe, as the iOS-only ForeFlight Mobile, which works on both iPads and iPhones. It’s pitched as an app for both VFR and IFR flyers and there are three levels of annual subscription.The Basic Plus package costs £95.99 per year, the Pro Plus £191.99 and Performance Plus £287.99.

Many of the advantages of the top-level subscription really come into their own with jet operations or corporate aviation, so I’d suggest that most GA pilots would choose Basic Plus or Pro Plus.

ForeFlight’s ‘Hazard Advisor’ isn’t a feature of the Basic Plus subscription, so you don’t get terrain or obstacle warnings. Therefore, I imagine most pilots would choose Pro Plus, which also adds the option to look at flights in profile view, georeferenced charts, synthetic vision (with the right external device) and some more sophisticated weather tools, including icing maps.

The best way to test a planning and navigation app is to go flying, and the FLYER Forum Raduno trip to Elba provided a great opportunity, so I loaded the beta version provided by ForeFlight and started planning.

Even if you choose to ignore the excellent downloadable manual or avoid watching any of the slick online instructional videos, you’ll find it easy to get started as the basics are pretty intuitive. You either type your route into the flight-plan box, or edit it graphically on-screen via the usual ‘rubber-banding’ features. Once you’ve done that, you ‘send’ your flight to the briefing and filing pages, where you can retrieve a weather and notam briefing.

On the day of departure, the weather throughout Northern France was ‘PANTS BECMG GLORIOUS’, but if I waited until the forecast clearance time, I’d be late for my (controller shortage-enforced) arrival slot into Calvi. This situation gave me the chance to check out ForeFlight’s IFR planning abilities and I have to say that they were impressive.

Within a couple of minutes, it had found and filed a Eurocontrol-approved routing, provided me with a thorough briefing and sent email confirmations to my phone. Had I been flying an aeroplane equipped with Garmin’s FlightStream (the in-cockpit wi-fi network) I would’ve been able to use the Connext feature to upload the flight-plan and myriad waypoints straight into the aircraft’s GPS. And if you have a  Jeppesen subscription you can link that to your ForeFlight account and get your georeferenced plates right in the app too, although that’s only available at the Pro Plus or Performance Plus subscription levels.

Quick and intuitive
For IFR flight, I found it quick and intuitive – combined with your choice of plates (Jeppesen or national AIP) it’s an app that almost does it all. While it files flight-plans, there’s no facility to create or file GARs, so you’d have to go elsewhere for that.

With the weather over the whole of France and the UK CAVOK for my return flight, it was definitely going to be VFR! The first issue, and I do have some sympathy with the app’s developers here, is that each European country has its airspace quirks, which makes things difficult.

In practice, this means that, in the UK for example, it’s impossible to tell the difference between a CTR, a MATZ and an ATZ just by looking at the screen. That isn’t the end of the world as you can touch the area to get more details, or figure it out with a bit of local knowledge and familiarity with the usual shapes, but when it comes to notam it’s a different story.

The last leg of my return flight took me from Montpellier to Henstridge. It being France on a weekend, I’d planned to fly a straight line between the two. Without notam shown graphically on the chart, the only way to brief is to look at those generated for the flight in the app’s briefing pack, where there’s a huge amount to read (over 300 pages).

I wondered if this might be atypical, so I planned a shorter, imaginary VFR flight, from Gloucester to Goodwood. That generated 156 pages of notam, which included some temporary Class D which wasn’t shown on screen but would’ve taken ages to plot from
the various coordinates, straight lines and radii given. I must admit that I reverted to SkyDemon to plan that leg, and to file my flight-plan and GAR.

As with most apps, ForeFlight offers a free, one-month trial, so you can sign up and have a look for yourself, without having to shell out for a year’s subscription up-front.
In conclusion, competition is good and having another big player in the market will ensure that the fast pace of app development continues. And the company which needs to keep that push going, in Europe at least, is ForeFlight.

I think it’s a great platform for IFR flight but I can’t recommend this launch version for European VFR flyers. The airspace confusion is frustrating, but the biggest problem is the lack of graphical notam, an issue exacerbated by the lack of notam filtering in the briefing pages.

It makes self-briefing difficult and missing something important all too easy, and that’s no way to fly in our complex skies. However, ForeFlight has a large team and I imagine these shortcomings will be addressed in due course.

[This review was first published in FLYER August 2018]