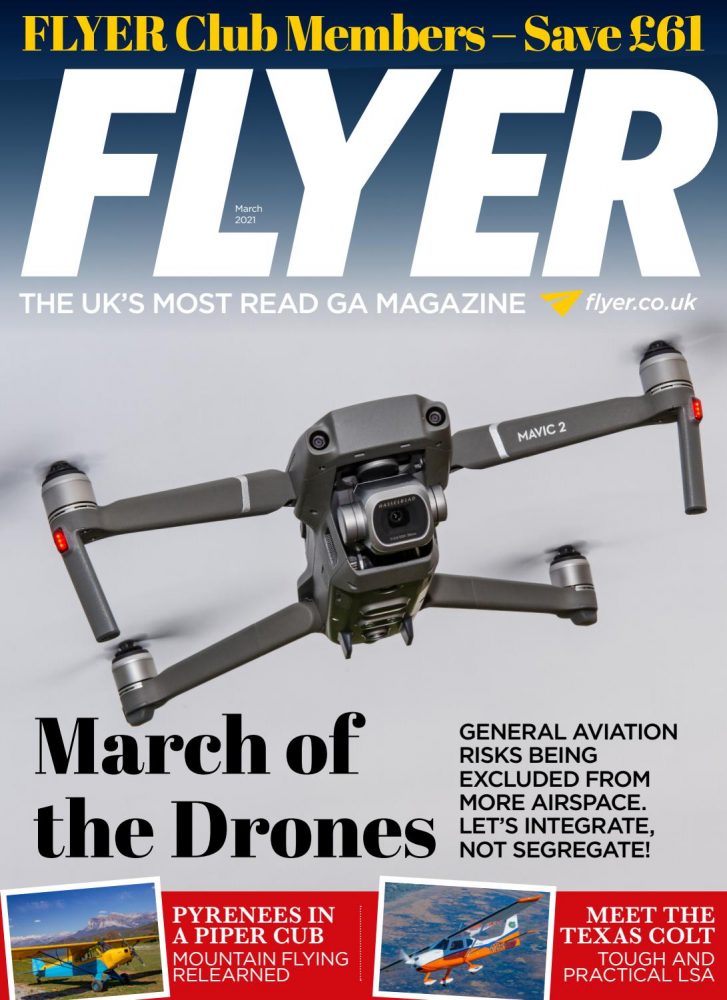 COVER STORY Why is a drone on the front cover of the UK’s favourite flying magazine? Because they’re after our airspace. In just a few weeks, airspace change proposals have arrived for three different drone projects requiring Temporary Danger Areas – which we’ll be excluded from when activated. Oban-Mull-Coll is one, the others are at Land’s End and Goodwood. We take a look at this invasive species…

Texas Colt, no, not a pony but a new all-metal Light Sport Aircraft that feels and flies like a much bigger aeroplane. Ian Seager flies it.

In Top Gear, Ed Hicks reviews a tyre pressure monitor which connects by Bluetooth to a phone app, making it much easier to keep a check on your landing gear’s tyres.

Kanchana Gamage started The Aviatrix Project to encourage women and girls to go flying, changing lives. Her role model is Amelia Earhart who broke the mould of what women were expected to do back in the 1930s… and Kanchana’s Fantasy Hangar has some pretty interesting aircraft too.

Professional pilot Yak Tuna flies a Britten-Norman Islander on charter flights around the islands of west Scotland. As well as needing top rate flying skills to cope with the terrain an climate, he also needs leadership and people skills. Read about him and his job in I Get Paid For This.

Safety Editor Steve Ayres takes a look at passengers and how they can transform a flight, often for the better but sometimes into journeys of terror.

And in Flying Adventure, Garrett Fisher thought he was an accomplished mountain flyer… until he went to the Pyrenees that is. He encounters a whole new frontier of flying calling them a ‘cheese grater of rock’ – and then there are the winds…

Luscombe 8 back into production as an LSA

Airspace of the Future consortium to integrate drones