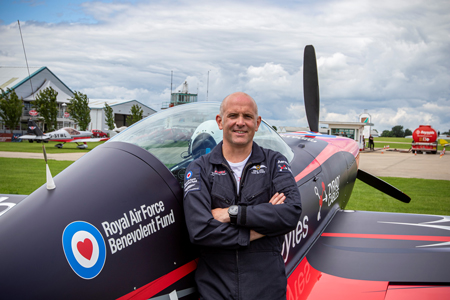 This Friday 16th April is an exclusive FLYER Club member’s only session with some really great content.

Firstly, we’ll be hearing from Ian and Ed about shooting air-to-air photography and seeing examples of their work with Ian at the controls of flight test aircraft and Ed somewhere in front, or behind, leaning out of a window with his DSLR!

Then we will be speaking to former RAF Red Arrow and now ‘Blade 3‘, Mike Ling, to hear more about his transition from fast jets to the general aviation world and the training he undertook to get there.

We will broadcast a new and never-before-seen video talking about the Spitfire Squadron at Enstone, produced by Reddison Productions – the team behind the FLYER Live broadcasts.

We’ll also be speaking to Sam Worthington-Leese about his journey to soloing a Spitfire and the process he took to make it happen, inspired by Battle of Britain veteran Geoffrey Wellum.

As ever, look out for the link in your inboxes on Friday!

Not a member? Join here!