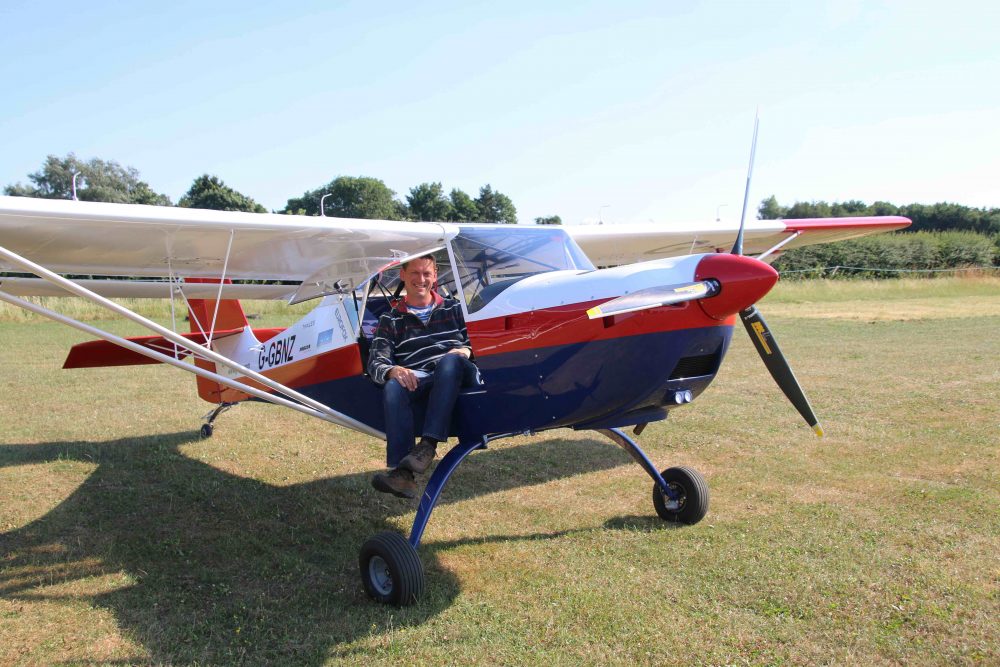 Inspired by early aviation pioneers, this RAF Wing Commander is celebrating the RAF 100 by flying his homebuilt aircraft from the UK to New Zealand

How did you get into aviation?
My father has always been a keen pilot, so at five weeks old I was already flying in a carrycot in the back of an old Cessna C150 with my parents. Apparently, I cried during taxying, but stopped when we took off and slept through the entire flight.
However, the main event happened when I was seven, at RAF Chivenor in North Devon. I was standing at the end of the runway when fifty Hawks came in to land. This was when I knew that, one day, I really, really wanted to fly. From then on, everything I did was with the aim of becoming an RAF pilot.

How did your flight training go?
I did my basic gliding training with the Air Training Corps aged sixteen. At seventeen, I was awarded a thirty-hour RAF Flying Scholarship at Land’s End Aero Club. My gliding experience helped with the airmanship and I found learning to fly a powered aircraft very enjoyable. I so desperately wanted to become an RAF pilot that I put lots of pressure on myself, but I soon realised that hard work and concentration produced results.
My instructor, Rod Bellamy, was a fantastic person – he filled me with confidence and insisted on high standards at all times, which was good preparation for my RAF career. We even did some aerobatics in a C150 Aerobat, which really opened up the 3D aspect of flying.

Did you expect your first solo?
I did, as it was on the flying programme. I was exhilarated, but not nervous or scared as I was well-prepared. I only appreciated I was alone when airborne, when I saw the empty seat, and I noticed that the aircraft performed way better. During my solo, I looked for any excuse I could find to prolong the flight. Then, at short final, there was someone walking on the public footpath across the grass runway, which allowed me to go for another circuit. Afterwards, I was very keen to get in the air again and flew for a total of 6.5 hours that day.
More memorable was my first solo cross-country flight as it allowed me to leave the circuit and tour the local area, talking to different ATCs along the way. I flew past Penzance and across Bodmin Moor before returning to Land’s End – a fantastic way of exploring the South West.
Another unforgettable moment on the course was a very foolish one. I climbed through a hole in the clouds, which then closed below me. I flew fifty miles south, out to sea, before I could finally find another
gap in the clouds and turn around. Luckily, I didn’t miss Land’s End on my way back – it was an utterly stupid thing to do.

How did you get the idea for the RAF 100 GBNZ project?
Aged fourteen, I read about the adventures of such early aviation pioneers as Bert Hinkler and Amy Johnson. From then on, it was my dream to fly a light aircraft to Australasia, so
I used RAF 100 as an opportunity to do so. A light aircraft such as the EuroFOX really allows you to take in the scenery, meet people and get involved in each country. I’ve flown a Tornado from Malaysia to the UK, but that isn’t the same. Along the way, we’ll visit locations with RAF history, including the final resting places of HMS Prince of Wales and HMS Repulse, off Malaysia.
A main objective of the RAF 100 is encouraging young people to study STEM [Science, Technology, Engineering and Mathematics] subjects, by visiting schools and promoting opportunities in engineering and aviation. Three of the team’s five pilots are women and it’s been great to see the effect they’ve had on the female students in the schools we’ve already visited.

What are you most looking forward to during the trip?
The spectacular scenery and weather challenges from Thailand to Christmas Island. It’ll be monsoon season, which means large thunderstorms and lots of rain. I’m also very much looking forward to meeting members of various Air Forces and commemorating our shared heritage. Flying bonds people and sharing the same unusual perspective on the world creates camaraderie.
A good example of this was the NATO Tactical Leadership Programme in 2005, which featured 42 aircraft and pilots from many countries. Flying my Tornado over Bremerhaven, looking down on the WWII U-boat pens, I thought about how things had changed, especially as our fighter escort was from the German Air Force. Back in the bar, one of the Germans had tears in his eyes as he talked about Europe’s change for the better.
It was a wonderful moment which illustrated the spirit of international friendship.

What do you love most about flying?
Walking out to the aircraft on a rainy day, climbing out through the wet clouds and then bursting into the sunlight above.