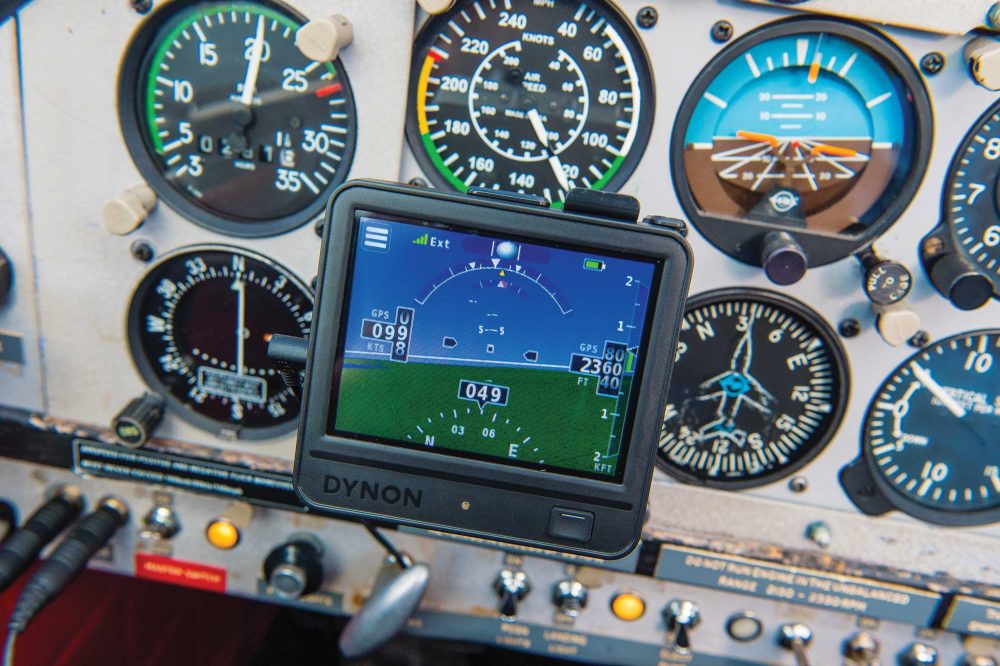 Hard to believe, but in January 2020, Dynon Avionics will have been making innovative equipment for homebuilt aircraft for 20 years.

Starting with a pitot probe that also measured Angle of Attack, the US company’s first EFIS (Electronic Flight Information System), the D10A, hit the market in 2003. A popular unit, they’ve found space in the panels of thousands of aircraft – one has even flown to space, onboard the Rutan-conceived SpaceShipOne.

For me though, one of the smartest EFIS offerings in the Dynon product catalogue has also been its simplest. The D1 Pocket Panel was launched in 2012 as something any PPL could temporarily fit to the panel of their certified aircraft without an approval. A D2 model followed in 2013, and then in mid-2018, the D3 was announced. It’s this unit we’ve been testing.

Identically sized to previous units (3.5in x 3.25in x 1in), there’s a slightly smoother case design and, aside from the power button, the D3 is now fully touchscreen controlled. After a quick charge via the new USB-C connector (adaptors are supplied, as well a car-charger and GPS antenna), and a check the firmware was up to date, the D3 was ready to fly.

The D3 comes with two portable mounting options, a ram suction cup mount, plus a 3-1/8in portable ‘pinch’ mount that allows the D3 to mount in an empty existing instrument panel hole without any fasteners.

Powering on, if you’re familiar with the D2, you’ll soon notice that the new screen is about twice twice as bright (if you use this at night, it has auto-dimming) and much higher-resolution. Touch the menu icon on the upper left corner of the screen to access most controls and settings. Swipe left and right on the main display to choose between various displays. It’s as simple as using a tablet.

Set the D3 up to the match the pitch and roll picture you see outside your aircraft (parking on a flat surface will help). In the set-up menu, up to 6˚ of roll and 30˚ of pitch adjustment can be used to get the sight picture perfectly aligned. There is no yaw adjustment though, so the D3 must be parallel with the lateral axis (wingtip to wingtip) of the aircraft. So no pointing it left or right to get it to face you (that won’t seem so natural anyway). Adjustments are easy to make and save.

When the D3 has a GPS fix, a display will appear showing GPS signal strength. After waiting a couple of minutes, we opted to plug in the external aerial, and that gave instant rock-solid reception. Throughout testing, that stayed the same.

Swipe the screen and you’ll find a g-meter display, which can be user-configured, and easily reset. Dynon notes that the D3 has no lag in manoeuvres up to 150˚ per second, and aerobatics don’t cause any permanent harm to the D3’s attitude sensing ability.

Performance-wise, it’s rock-steady and no fuss, just like the D2. Synthetic Vision is a nice addition, and if you fly around mountains, then the D3 will display them as they, and any other terrain that appears. The IMC pilot that I shared the D3’s testing with said, while he liked the Syn-Vis mode, he preferred the standard basic display because it gave him everything he needed. Switching between the two was simple.

Dynon quote battery life at 5.5 hours at full brightness and 7+ hours without synthetic vision at 60 per cent screen brightness. We found in testing that these are conservative figures.

When I tested the D2 in December 2013, I said, “The name Pocket Panel is almost too dismissive of how serious this unit is.” Five years later the D3 just adds a level of polish to that.

As a completely self-contained attitude system that can be taken in an aircraft as a backup for the installed instrumentation, particularly if there’s only one vacuum pump fitted, then for under a grand, this must be one of the best safety-related purchases that a pilot can make.