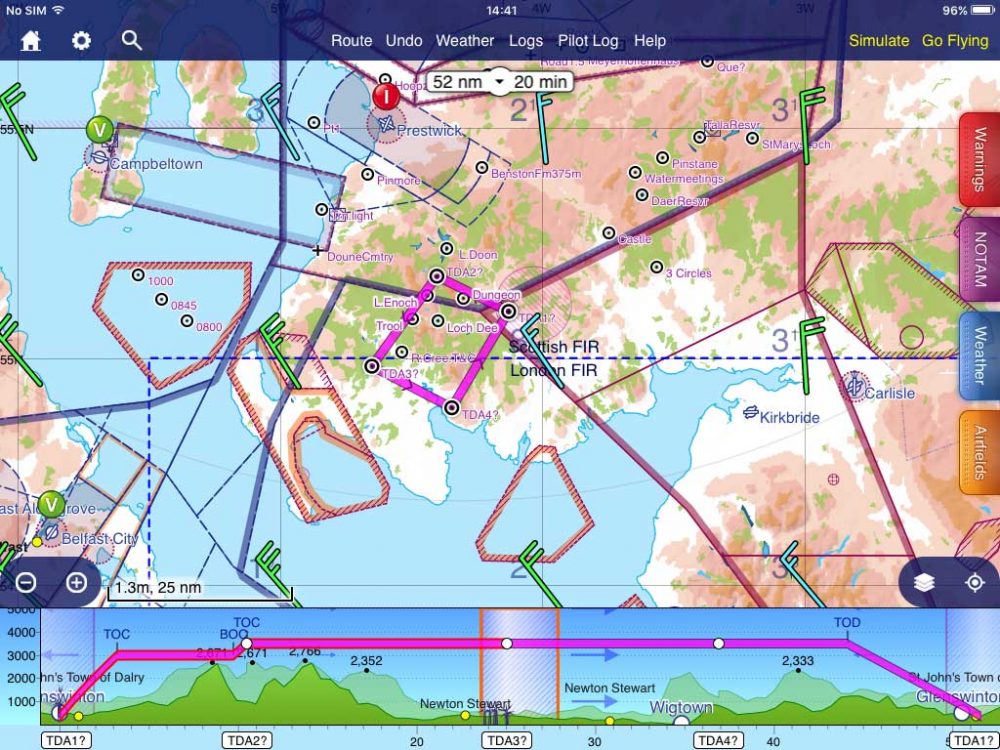 A huge area of airspace 25nm south of Prestwick, Scotland will be blocked off if a new Temporary Danger Area (TDA) for drone operations goes ahead.

The TDA is 160 square miles, from the surface to 3,700ft around Newton Stewart, Dumfries. It is surrounded by the D402, D403 and D405 existing Danger Areas and is thus often used by transitting VFR traffic looking for a low-level north-south route. The period of operation is September-October this year.

An unnamed mineral exploration company has rights to areas north and east of Newton Stewart and wants to make a magnetic geophysical survey of their mineral concession area.

The ACP was originally submitted last year but ‘paused’, presumably because of lockdown restrictions, and recently ‘unpaused’ and is now in a six-week consultation period. It’s unclear exactly when that started so it’s suggested that anyone wnating to comment do so immediately. The ACP reference is ACP-202-049 Newton Stewart link

Hamish Mitchell, who operates Scotia Seaplanes in and out of lochs in the area, said, “I think this is the kind of drone operation that has been going on for many years (unlike all the new kids on the block), and in the past it may well have elicited little comment, but the whole TDA thing has now got out of control and I don’t think it is acceptable now to just constantly let it slide.

“We should be refusing TDAs and substituting with some kind of temporary TMZs (to the minimum size required and for the minimum period necessary) as the next best option. Whilst it still excludes non-EC equipped aircraft, it is better than a TDA which excludes everyone.

“It also puts more onus on the drone companies to fit EC Detect and Avoid (DAA). Drone companies should be required to ensure ADS-B Out is transmitting before launching, and supplement ground based ADSB/ATOM/OGN relays so that coverage of the drone position is freely available on FR24, PilotAware, FLARM etc.

“This would provide feedback that their drone is visible. Anyone with PilotAware, FR24, Skyecho2 etc can then see where the specific drone is at any given time.”

The drone operator, UAVE, says it has been contracted by its client to plan and conduct the aeromagnetic survey using its Prion Mk3 Unmanned Aerial Vehicle (UAV).