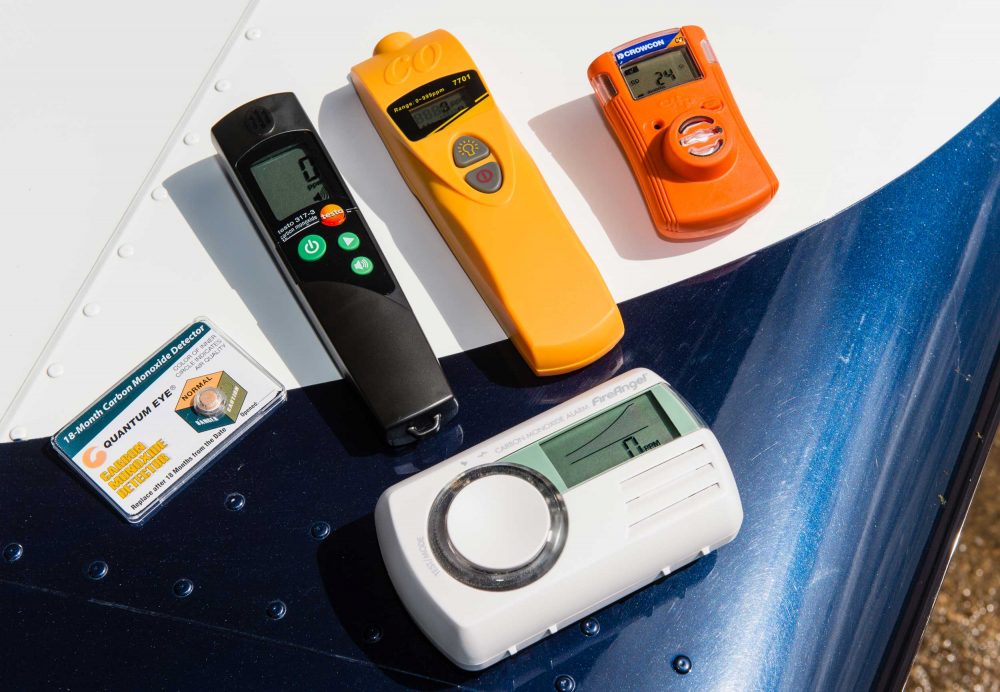 Right, it’s time for a quick flashback to the human performance section of your PPL exams. Remember learning about how firewall-forward exhaust leaks can enter the cockpit?

The problem gas in question is carbon monoxide (CO), a dangerous, poisonous gas that has no odour or taste and cannot be seen.

Like oxygen, it enters the body through the lungs as you breathe. CO competes with oxygen by binding to the haemoglobin, the main vehicle for oxygen transportation, within red blood cells. Compounding the problem is that haemoglobin has an affinity 210 times greater for CO than that for oxygen, plus its effects are cumulative. A day flying multiple legs, even stopping for fresh air, is no safeguard against CO poisoning if an exhaust leak is present.

With CO making up 5-10% of piston aircraft engine exhaust gas, if leaking exhaust gas enters the cabin – especially through the cabin heat, then it’s bad news for the body.

The health effects of CO depend on the concentration and length of exposure, as well as each individual’s health condition. CO concentration is measured in parts per million (ppm) – and 35ppm is considered the maximum continuous exposure for an adult in any 8 hour period.

Most people won’t experience any symptoms from prolonged exposure to CO levels of approximately 1 to 70ppm but some heart patients might experience an increase in chest pain. As CO levels increase and remain above 70ppm, symptoms become more noticeable and can include headache, fatigue and nausea.

At sustained CO concentrations of 200ppm, dizziness will  occur, 400ppm is life threatening after three hours, while at 800ppm, you’ll be unconscious within three hours, and likely dead soon after.

The most common method of detecting CO in the cockpit is the familiar stick-on plastic card with a chemically-sensitive dot that darkens in colour from orange to black, typically fixed to the corner of an instrument panel, or cockpit sidewall. How often have you looked at one, and wondered to yourself if the spot looks darker than it should?

Having seen a few aircraft with domestic digital CO detecting units fastened with velcro into the footwell area, I was curious to try digital measurement of CO in the cockpit, so went looking on Google for detectors. I decided to try four units, the FireAngel CO-9D, a domestic detector for home, plus the Testo 317, the Omnitron CO, and the Crowcon Clip.

Taking them flying in FLYER’s Cessna 182, the ambient cabin air during cruise measured around 2ppm, while pulling on the cabin heat saw an increase to 8-10ppm. Clearly no leaks – good news!

On the ground, we tried the units in free airstream at 1,200rpm, 3ft behind the exhaust outlet. The Crowcon and Testo measured steadily around 230-250ppm, the FireAngel 262ppm while the Omnitron seemed a little more variable from 150-200ppm.

It’s worth noting that while we were doing the exterior exhaust test, while the rest of the units were located on the passenger seat in the cabin with the door ajar, it was evident the CO level increased as slipstream pushed exhaust into the cabin. Readings of 35-40ppm were noted.

The Testo and Omnitron allowed for easy user level setting, whereas that wasn’t possible on the Crowcon without a docking station, which could be an issue as the low and high warning level alarms were set at 30ppm.

The FireAngel has no option for user settings, but has a sensible set of preprogrammed level and time settings that would work in a cockpit environment. The Crowcon has a fixed battery life of two years, and it can’t be replaced. The same goes for the FireAngel, but its battery lasts for seven years. The Testo and Omnitron used replaceable AAA batteries.

The units with the loudest alarms were the Crowcon and FireAngel. The Crowcon also had three very visible warning lights and a vibrate function to add to its alerting capability.

All in all, each of the the units demonstrated that they were effective ways to detect CO. In my opinion, the FireAngel represents the best value for money, if you can find a home for a unit of its size (120 x 70 x 40mm), while the Testo was the most versatile measuring device and had a slim form factor.

I kept a fresh CO detector card on hand throughout the testing, it didn’t indicate a change at any time. I suspect the prolonged exposure it needs to change colour made me think that the day I depend on one of those to tell me there’s an exhaust leak, I hope I’m not too fatigued to recognise the colour change… 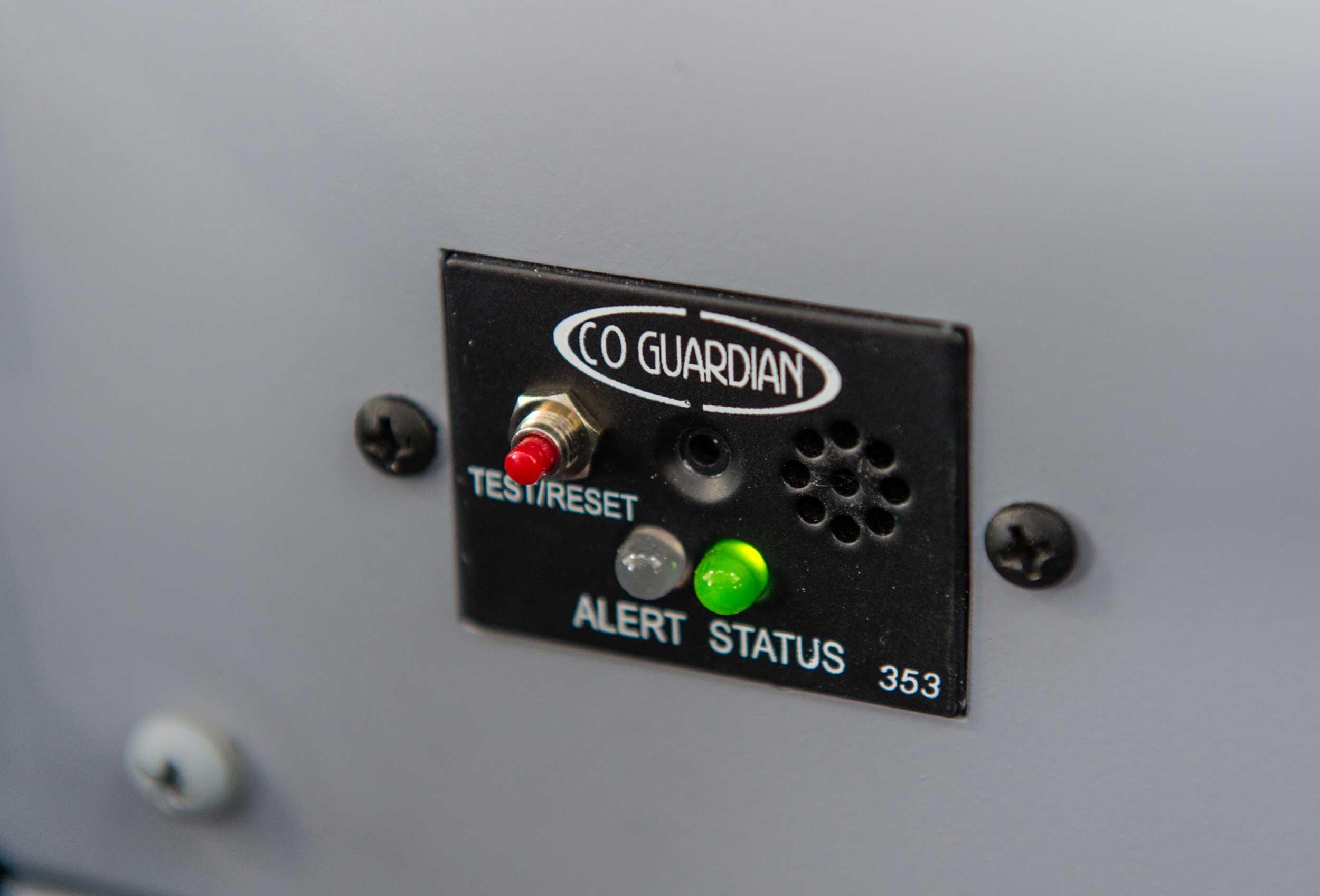 This panel mounted CO detector is FAA certified and is authorised for GA aircraft under  Non-Required Safety Enhancing Equipment (NORSEE) authorisation, and requiring only a ‘Minor Alteration’ logbook entry by an engineer.

It sounds an alarm when it detects CO levels greater than 50 parts per million (ppm). A loud 85db aural warning will sound and an amber warning LED will flash when CO measures 50 to 99ppm over a three to five minute span. An aural warning and a red LED flashing warning will trigger when levels climb above 99ppm immediately when detected. It can also connect to an external annunciator light if the unit is installed out of view.